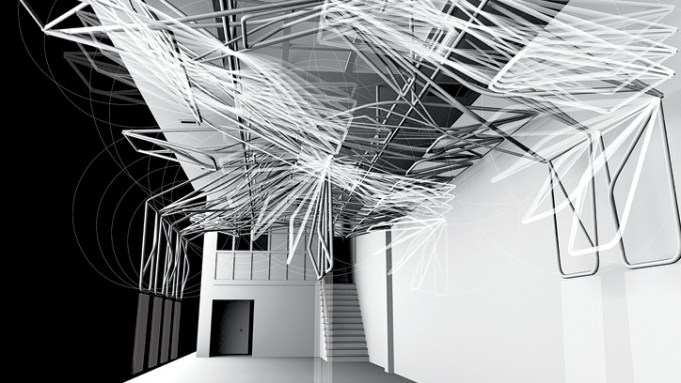 British architecture critic Reyner Banham observed in his 1972 book, Los Angeles, “Once the history of the city is brought under review, it is immediately apparent that no city has ever been produced by such an extraordinary mixture of geography, climate, economics, demography, mechanics and culture; nor is it likely that an even remotely similar mixture will ever occur again.”

Think what you will about many of Los Angeles’ traditions, but to design structures in the City of Angels requires architects to adapt to that mixture, especially given its changing, and forever sprawling, landscape.

Few young architecture offices better exemplify this agglomeration than Oyler Wu, founded by Dwayne Oyler and Jenny Wu, where the mix of projects sits at the  intersection of the urban and suburban and reflects the city’s constant flux as being neither one nor the other. The pair run their office out of the American Cement Building—which is clad in a dramatic X-shaped concrete shell—on Wilshire Boulevard in what is technically Koreatown, but recently has become the middle ground between the idyllic, palm tree–lined stretches of West Los Angeles and the grittier landscape of downtown.

“I find the residential parts of downtown really interesting. It’s not quite downtown [in the normal sense], but certainly not suburban,” says Oyler. “I like that in-between; there is this intensity and activity there.”

That energy emboldens the two architects, who met while students at Harvard’s Graduate School of Design. Both of them worked in several offices in New York—Oyler at Toshiko Mori, while Wu worked for Gluckman Mayner, among others—before establishing their practice on the West Coast. This year, the duo  won a competition to design a new home for the Los Angeles Forum for Architecture and Design. The gallery was envisioned as a constantly shifting space—exhibition room one day, an event venue the next. For the narrow interior, the architects incorporated an ingenious system of metal aluminum racks that pivot downward to hold visual material, and can neatly be put away into the ceiling so the space is a true forum. When collected, the system resembles a chaotic tangle of metal wires.

“Pendulum Place is a highly intelligent device that operates at many levels,” says Mohamed Sharif, the president of the Los Angeles Forum. “Even when inactive, the structure holds its own as a strange autonomous framework.”

The project, which was designed and built in a matter of three months and opened in September, is a small one, considering the architects are also working on an entire building in Taiwan. Their Taipei tower is for mixed used that incorporates retail on the ground floors with apartments on the upper floors. Currently being redesigned and enlarged after their client acquired an adjacent plot of land, the Taipei building reflects how Oyler and Wu can create  a design that is a synthesis of intensely dense and urban while reflecting some of the more pleasing aspects of living within a city. Rather than being locked into glass cubes, each apartment features a balcony that is screened on the exterior by a movable metal mesh screen. The building feels like it comprises constantly shifting volumes—rather than a huge chockablock mass.

Last year, Oyler Wu became one of 100 architects from around the world invited by Ai Weiwei and Herzog & de Meuron to design a villa in Ordos, a remote city in Inner Mongolia. In a way, the building is a perfect example of the duo’s talents at making a typically suburban building type— the single-family home—fit into a dense setting where dramatic buildings are set close to each other. The house creates a more conscientious relation to the landscape by situating most of the structure in the ground, as the building’s concrete shell gracefully makes as little of a visual impact on the landscape as possible.

How does a firm adapt to designing for such disparate places as Los Angeles, Taiwan and Inner Mongolia? “Trying to understand the context [of Ordos] was difficult,” says Oyler. “We asked ourselves, ‘How do we design to fit a local culture?’ It’s hard to understand until we realized that we’re designing for international culture. That has been the major difference.”