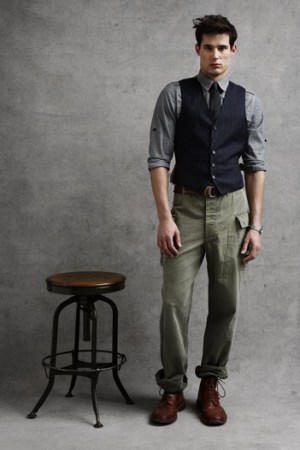 A little more than two years after leaving J. Crew as the company’s senior vice president of men’s design, Snyder is launching his own men’s wear collection. The line made its debut Wednesday night in New York City, across the street from the company’s showroom and office.

“This is something I’ve dreamt about my whole life,” Snyder told Men’s Week. “I come from very humble roots and when I moved to New York 20 years ago, it was always my goal to do my own line. My father told me to work for the best before you go out on your own, so I spent 18 years at Ralph [Polo Ralph Lauren] and J. Crew.” He has also interned for Joseph Abboud and worked at the Gap.

During his years at J. Crew, Snyder was credited with introducing tailored clothing, working on the 10 Easy Pieces campaign, forming collaborations with heritage brands such as Timex, Red Wing, Thomas Mason and Alden and opening the company’s first men’s-only store, the Liquor Store in TriBeCa, in 2008.

The Iowa-born Snyder, who grew up idolizing American icons such as Cary Grant and Steve McQueen, also did his homework in other ways, working as a tailor’s assistant in Des Moines. “That taught me the love and the art of tailoring,” he said.

His 60-piece debut collection of tailored clothing, sportswear and furnishings mixes British tailoring with American vintage sensibility. Snyder creates a juxtaposition of classic pieces with more utilitarian elements such as tailored vests mixed with cargo pants or jeans. The collection also has military influences, such as an officer’s coat, selvage chinos and aviator-inspired leather jackets. There is a wool-cashmere blend Donegal sweater, stonewashed cashmere cardigans and knit sweatshirts, plaid sport shirts in vintage Italian fabrics, black chambray shirts and a variety of jeans, some of which sport resin-crinkled washes.

In terms of suits, the fit borders on a European silhouette. “It’s not all-American boxy but it’s not skinny, either,” he said.

Snyder said, “We’re making luxe versions of classic items, so there are a lot of highs and lows.”

“Our customer is an all-American guy, but global. He understands great food and architecture,” Snyder said.

The collection has already been picked up by specialty stores in Japan and Snyder is hoping to land some high-end U.S. accounts as well, such as Barneys New York, Bergdorf Goodman and Neiman Marcus. Some 200 people were expected to attend the presentation on Wednesday night to launch the line, which is self-financed.

“This collection tells the story of who I am,” he said. “Snyder in Dutch means ‘tailor.’”