Diego Della Valle began a new era at his flagship brand, with Alessandra Facchinetti at the creative helm. 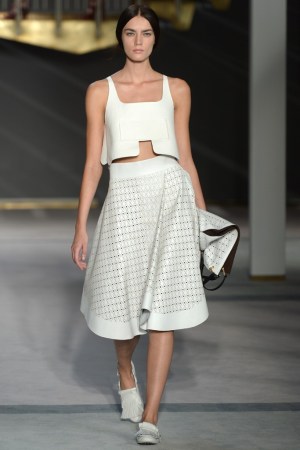 It was a feast of firsts: Tod’s first runway show, held in September to unveil the first ready-to-wear collection designed by the brand’s first creative director.

“Alessandra has shown in these months that she has understood the philosophy of our brand, blending great quality, femininity and a sense of fashion in an excellent way,” said Della Valle. He praised her “passion for details and for the research of materials and craftsmanship, which allow her to take sophisticated steps of artisanal luxury and make her perfect for our brand.”

The show—or performance, as Della Valle likes to call it—was staged at Milan’s PAC, the city’s contemporary art museum, where Tod’s has held its presentations over the past few years. Dubbed “Italian set,” the space was furnished with Giò Ponti pieces and decorated with paintings by Lucio Fontana and Agostino Bonalumi, all contributing to a Fifties vibe. The ceo said it was an invitation to “Tod’s home,” aiming to present the new rtw collection, but also “to discover the lifestyle” that is core to the brand.

Building on the label’s core leather business, Facchinetti, a former head designer for Gucci and Valentino, developed a polished collection that skewed sporty and sleek, and the designer said after the show that she had “worked with leather thinking it’s cotton and breathing new life into it.”

The lineup included stylish white shirts with undulating vents paired with statement skirts, from pencil-thin designs with Fifties-inspired color blocks in white and burgundy, to voluminous and scalloped looks, sometimes punched or embroidered with openwork.

Della Valle has no intention of straying from Tod’s core business—handbags and shoes—which will continue to be at the heart of the brand, and he underscored that Facchinetti is also in charge of designing those categories.

For spring, Facchinetti added to the pebble-soled moccasins with playful fringes and leather scallops on the vamp, while a maxi-chain motif spruced up the season’s new sandals.

“The new collection does not represent as much the start of a new era, but rather an evolution for our brand, adding a feminine and modern touch also to our iconic models,” Della Valle explained.

Tod’s is the flagship brand of the Tod’s SpA group, which includes Hogan, Fay and Roger Vivier. In 2012, the Tod’s label remained the group’s core business, with sales of 569.7 million euros, or $729.2 million at average exchange, up 16.8 percent from the year before.

Della Valle said he doesn’t aim to open too many stores or expand the product categories without a focused strategy. “But we want to grow well, continuing to respond to our customers’ requests. The ready-to-wear designed by Alessandra respects this strategy precisely: to give our customers the chance to wear Tod’s clothing without impairing the identity of our brand or its image.”