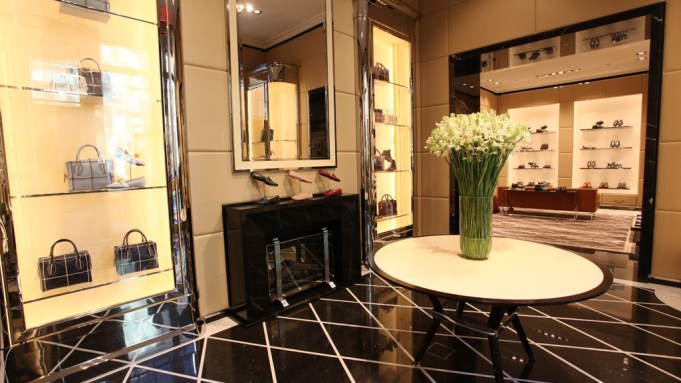 “This is the temple of luxury and of Italian quality,” said Diego Della Valle, chairman and chief executive officer of Tod’s SpA, describing the newly redesigned Tod’s boutique at 650 Madison Avenue in Manhattan, which will quietly open its doors on Sunday and be officially inaugurated with an event on Monday evening.

The store features a new concept for Tod’s, and Della Valle underscored that, going forward, the strategy is for each flagship to have its own identity. “We want to avoid the sameness — the boredom of seeing stores that are alike all over the world, wherever you are,” he explained. “The ingredients, the materials and colors will fundamentally be the same, but with a different interpretation depending on the location.”

First opened in 1999, the Madison Avenue store has been given a complete makeover. It now makes a statement for Tod’s evolution from a luxury footwear and leather goods brand to a lifestyle collection replete with women’s wear by Alessandra Facchinetti and men’s by Andrea Incontri.

The interior look, developed with an in-house team, signals an enhanced sense of luxury compared with its previous iteration.

“This unit is appropriate for the city, the street and the country,” said Della Valle. “It’s sort of an Italian palazzo. We wanted to blend the DNA of the brand and the Italian style. Materials are all Italian, the leather is especially treated and recognizable, in line with our product.

“That part of Madison Avenue is perhaps the best location in the U.S. in terms of traffic and elegance,” he added of the strip between 57th and 70th streets. Tod’s is located between 59th and 60th streets.

Della Valle said he wanted the store to have a warm and welcoming feeling, as if customers were walking into a private home. “The idea is to do away with the frenzy as the customer approaches shopping,” he said. “They can come in, take a look around, look at beautiful things, taking their time and enjoying it.”

The interiors are defined by portals in black stone; boiserie walls flank those in light leather — a distinctive element of Tod’s — and those in gray lacquered wood or sophisticated gray stone. Black stone fireplaces and leather sofas contrast with steel and marble fixtures. Carpets feature a diamond design — an element reminiscent of Tod’s Milan palazzo — and are also reflected in the marble floor of the flagship’s entry room.

At 3,500 square feet, the store has about 20 percent more selling space than before, the result of the reconfiguration of the building’s lobby, which is adjacent to the store.

Where once the window displays let natural light into the store, the street view is now largely closed off to shoppers, giving the store a more private, exclusive feel.

Della Valle declined to provide the amount invested or sales forecasts. “It’s an investment in line with a four-star flagship and we expect a strong return, also in terms of image. And it’s added service to our customers,” he said.

Della Valle has long been a fan of America and the brand is well established in the U.S. “This is a country that knows luxury. Beyond any momentary setback, Americans recognize quality. It’s a market that we want to continue to keep in consideration. It’s a country that made me dream when I was a kid. My son [Emanuele] lives in the U.S. and I have three grandchildren born there that could potentially become possible presidents,” he quipped.

Last year, Tod’s SpA sales in the U.S. totaled 90.3 million euros, or $120 million at average exchange rates, climbing 10.5 percent compared with 2012. At constant exchange, revenues would have risen 13.1 percent. The Italian group, which also comprises the Hogan, Fay and Roger Vivier brands, closed 2013 with sales of 967.5 million euros, or $1.27 billion.

There are currently eight Tod’s stores in the U.S. During a store walk-through on Thursday, Roberto Lorenzini, Tod’s ceo for North America, said that there are three additional units in the works for the first half of next year: Atlanta on Buckhead Avenue Northeast, Houston at Houston Galleria and Miami in the Design District.

“Americans have always been big shoe buyers, and they are increasingly appreciative of our offer of leather goods. Their only request is not to change our quality and style,” Lorenzini said.

Della Valle, Facchinetti and Incontri will be in town for Monday’s celebration, which will be followed by a private dinner. To mark the opening, Tod’s will offer several special limited-edition items, including a reinterpretation of the brand’s iconic styles re-created for the New York boutique, including the Gommino shoe and the Script bag.