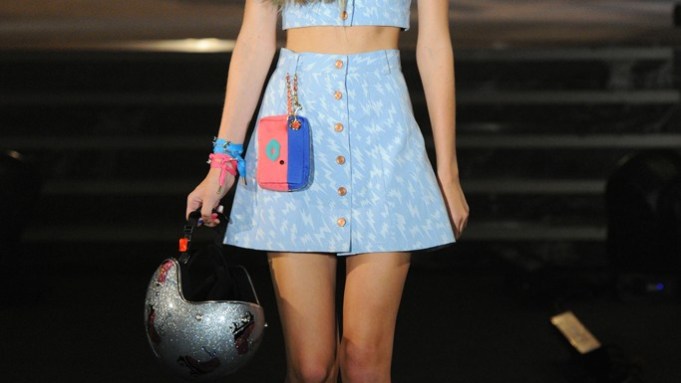 TOKYO — Designers and retailers may have withstood a typhoon during this city’s six-day fashion week, but economic headwinds are still gusting.

From a creative standpoint, foreign buyers, some of whom received free trips from the Japanese government to attend the shows and presentations, were upbeat about the fashion they saw as tending toward a more accessible than extreme aesthetic.

“The Japan designers did a very good job with [real-world sensibility] and a true creativity and they are very open and attentive to advice,” said Géraldine Florin, partnerships senior buyer for fashion and accessories at Galeries Lafayette.

Fashion week organizers said international buyer registrations rose to 221. That compares with 212 buyers in March and 192 in October. The countries with the biggest number of registrations were China and the U.S. with 50 and 35 respectively.

And while buyers were generally positive in their feedback, those accolades still do not necessarily translate into significant commercial sales. Some Japanese merchants said they liked what they saw but they are also balancing their budgets to accommodate talents from other countries, such as the U.S. and the U.K.

Aya Ota, a women’s buyer for Isetan’s Shinjuku store said she was impressed with the work of Sretsis, Facetasm and men’s brand Toga Virilis. At the same time, she warned that she might trim her budget for Japanese designers for the spring season as she is favoring British brands at the moment. Perhaps more importantly, she expressed caution about Japanese shoppers’ increasingly selective mind-set.

“After the fall of Lehman Brothers and the March 11 earthquake, it’s not cool to be so interested in fashion anymore,” she said. “Young people are using their money for other things besides clothes. They won’t buy something just to buy it; it has to be very good, something they’ll use for a long time, or something they really like.”

Kogi said he’s seeing a lot of strong “luxury street” brands coming out of Los Angeles at the moment, so he may allocate more of his budget to those labels. That doesn’t necessarily mean that his budget for Tokyo brands will decrease but it probably won’t increase, he said.

While Japan’s economy performed relatively well over the tail end of last year and the first part of 2014, it took a tumble in the second quarter. It contracted an annualized 7.1 percent over the April-to-June period. April’s sales tax hike — the rate grew from 5 percent to 8 percent — put more of damper on consumer sentiment than originally anticipated. The country is now waiting to see whether Japan Prime Minister Shinzo Abe will proceed with plans to push through a second sales tax increase to 10 percent next year.

“The tax hike is also posing a threat to the apparel and luxury goods market in Japan. The majority of Japanese consumers feel discouraged from purchasing apparel due to the tax hike and followed by rising price. According to the Japan Department Stores Association, consumers’ spending on apparel at department stores continued to decline from April to August. However, luxury goods performed better compared to regular apparel,” said Yukino Kawabata, a research analyst with Euromonitor. “There are certainly those that think the government should postpone the second tax hike in October of 2015 as it would double the tax rate from 5 percent to 10 percent in a period of just 18 months.”

While Japan’s economy remains a significant question mark for designers here — and many of them do the bulk of their business in their home market — a relatively weak yen works in their favor when it comes to export appeal. Still, as Florin pointed out, Japanese designers need to understand the needs of international retailers. For one, western stores need a wider range of sizes beyond the two or three sizes that Japanese brands often produce.

Nick Wooster, a consultant who formerly worked for Neiman Marcus and Atrium, visited Tokyo for a second straight season as a guest of show organizers. He said he has seen an evolution in the quality of the brands and shows since March. Citing standouts such as Factotum, Yoshio Kubo, Kidill, 99%IS- and Onitsuka Tiger x Andrea Pompilio, he said he was impressed with the men’s tailoring and attention to distinctive shapes and bright colors.

“So many of the trends that you have seen done on the runways in Milan and Paris actually have evolved and are also here. So it’s not like it’s from outer space or not relevant,” he said.

As in past seasons, fashion week organizers invited a handful of international buyers to come to Tokyo on free trips to check out local brands. Guests this season included Galeries Lafayette’s Florin, Jennifer Mankins, owner of Bird in Brooklyn and Herman Shah, director of operations and a buyer for Singapore-based Front Row.

Mankins said she plans to pick up a few new Japanese brands for her store including World Basic, Nicholson & Nicholson and Still by Hand. She also enjoyed the playful patterns and prints at the Ne-net show.

“Every collection is beautifully produced and the textiles are gorgeous,” said the retailer. “It’s eye-opening to come here for work…to really dive in and meet the smaller designers.”

Shah said he still hasn’t decided if he will pick up any Japanese designers this season but might be ordering more accessories. While he said he appreciates the quality level and design expertise of Tokyo designers, he offered measured feedback of the week.

“Tokyo as always has been evolving. This season is no different,” said Shah. “But the brands I saw this season are playing it safe I feel, I guess to be more accepted internationally.”