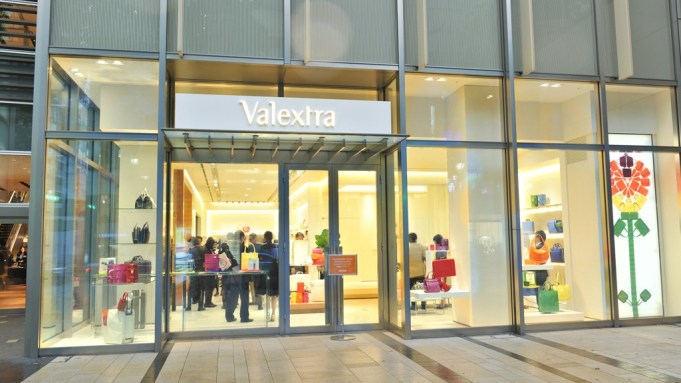 TOKYO — Tokyo Midtown, one of the Japanese capital’s many luxury multi-use developments, has undergone a renovation of a large portion of its retail section, resulting in the opening of over 30 new stores and ten redesigned ones, including fashion boutiques, cafes, and interior goods shops.

Italian accessories brand Valextra is one of the more prominent new tenants of the complex. The 1,437-square-foot unit is the label’s first flagship store in Japan, occupying a choice corner unit with direct access to the street. The space was previously home to a Bottega Veneta store, which moved to a larger unit inside Roppongi Hills, a competing complex located just down the road from Midtown.

“This is just one step,” Valextra’s chairman Emanuele Carminati Molina said Wednesday, on the sidelines of a press preview of the complex’s renovations. “Our plan is to grow very, very fast in Japan following the development of our brand here.” Carminati Molina added that Valextra has seen “great success” in its shops-in-shop in Japan over the past three years.

The executive also suggested that his brand is looking to open more stores in Japan as soon as next year, possibly including an even larger flagship in Tokyo’s Ginza district.

“Now is the moment to push our brand,” Carminati Molina said.

On the other side of the mall entrance from Valextra’s matte white stone floors and camel-colored wood shelves is the first freestanding store of Adeam, a New York-based brand designed by Hanako Maeda. It is outfitted in cool gray, with mirrored walls and display cases resembling wardrobes.

Maeda said that, while she and her team work out of New York, she chose to open her first flagship in Tokyo because it’s her hometown, and the company that owns the brand, Foxey, already has a customer base here. Maeda made her New York fashion week debut in February.

A new 6,365-square-foot Ron Herman store makes its home in the basement level of the development. The large store sells a selection of men’s and women’s clothing and accessories, as well as jewelry, surfboards and interior decor. At the back of the store is a small coffee and bar counter, and customers can take their drinks out to the attached terrace on days of good weather. There is also a small children’s area with toys and a TV playing cartoon DVDs.

Herman said that although Midtown is not the type of development where his brand would normally have a store, he was drawn to it because of its sophistication.

“I came here a year and a half ago…and it just felt so sophisticated and artistic, and I thought, you know, it’s such an odd thing for us to be here,” he said. “And I love our mix anyway, but I loved the idea of bringing our mix here.”

Ron Herman occupies a space formerly used by Muji, which relocated to a smaller space within the mall, but it is virtually unrecognizable from that time.

“We’ve planned a lot of things before, but this was one of the most difficult,” Herman said of the construction, which took one year from the time of conception. The formerly open, airy space was made to feel more like a beach house by separating it into several smaller rooms, lowering some of the ceilings, and adding sliding wooden shutters to the windows.

Herman is busy expanding his presence Japan. He has his first store in Osaka opening on Friday, and a location in Yokohama planned for June. In addition, the brand is in the process of building a four-story, standalone store in the residential area of Futako Tamagawa, in Tokyo’s southwestern suburbs. That store is due to open in March 2014, and a Kyoto store is also planned for next spring.