Working out of a small office in a nondescript, late-Sixties apartment building in the heart of Tokyo’s fashionable Jingumae district, Hiromichi Ochiai runs one of the city’s buzziest brands: Facetasm. 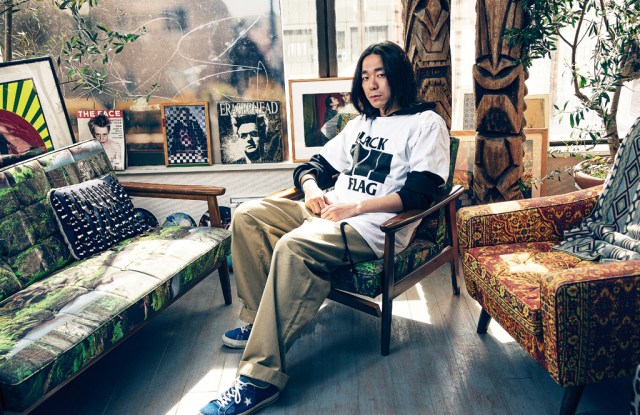 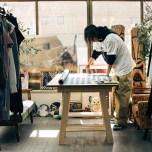 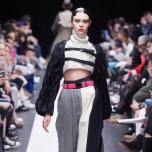 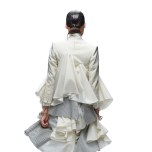 Working out of a small office in a nondescript, late-Sixties apartment building in the heart of Tokyo’s fashionable Jingumae district, Hiromichi Ochiai runs one of the city’s buzziest brands: Facetasm.

Last month, the designer of the eight-year-old label closed Tokyo Fashion Week with a high-energy show featuring innovative takes on tailoring and garment construction. Large bustles of ruffles jutted out from pants, skirts and jackets, swooshing as the models walked the runway. Also notable were an oversize poncho in bright pink and a navy peacoat with origamilike sleeves and lime-green pockets — just two examples of how Ochiai strives to create “a mix of street and high fashion.”

The 37-year-old Tokyo native said he “likes to take something that’s seen as casual and elevate it.” That approach seems to be paying off for the designer, who works with a team of just four people. Annual sales are still modest at 150 million yen, or $1.26 million, but the business is poised to grow. Facetasm has more than 50 sales points in Japan and 15 other stores worldwide, including I.T and Joyce in Hong Kong and H. Lorenzo in Los Angeles. The latest, Dover Street Market outposts in New York and London, picked up the line for fall and Ochiai is set to design two exclusive pieces for the retailer.

Kazuyoshi Minamimagoe, senior creative director at Japanese retailer Beams, said Ochiai’s Facetasm collection was his favorite of the Tokyo season. “I think among the brands that participate in Tokyo Fashion Week, it’s the most top-class one….I think every season it’s interesting,” he noted. “But this time it had a polish to it; it was more sophisticated. I think from a buyer’s point of view, it’s an easy collection to buy.”

Gary Wong, buying director at Shine in Beijing, also lauded Ochiai — even while lobbing a bit of constructive criticism. Wong, who has been carrying Facetasm for two seasons, reported that the women’s collection is doing well with Chinese customers. But he also cited some repetition in recent collections and would like a “stronger statement” and a more international viewpoint from Ochiai.

“If [he were to] travel to Hong Kong or China, observe what people like, it helps,” Wong said. “This is important for any young designer — you go there and you see the people and understand what is Beijing, not just stay in Tokyo and, on occasion, go to work in Paris.”

Ochiai, who is set to be in Paris in June for his second showroom project for young Japanese designers as part of the Tokyo Fashion Award initiative, said he developed an interest in design as a high school student, fascinated by Undercover’s Jun Takahashi. “I was able to watch his rise in Paris in real time — I was very impressed by that,” noted the designer, sporting a shoulder-length mane of black hair, baggy khaki pants and a Black Flag T-shirt layered over a hooded sweatshirt.

After enrolling at the prestigious Bunka Fashion College, Ochiai developed an appreciation for the lumpy, asymmetric forms Rei Kawakubo did for her Body Meets Dress, Dress Meets Body collection for Comme des Garçons’ spring 1997 season. He also admired the work of the Antwerp Six. “I liked that they were doing something to really change the era of fashion, to leave something behind, do something memorable,” he said.

Following his graduation in 1999, Ochiai struggled to find jobs in fashion, so he accepted a part-time position at Tokyo textile company Guildwork as a stopover. He ended up staying for eight years, acting as a liaison between the fabric maker and its clients — which included Comme des Garçons, Undercover and Zucca. “I was able to work with [lots of] different designers and learn from each of them,” he recalled.

In 2007, he decided to set up shop with a brand of his own — choosing to call it Facetasm as a play on the word facet. “Each season I want to show a different side,” the designer explained.

Ochiai based his fall show on the concept of “love” — although, as he clarified, this referred to a love of clothes by both himself and others — saying he wanted his audience to have a “warm feeling” after the show.

Yet in general, Ochiai said he doesn’t really think in terms of themes. “I’ll just be walking around Tokyo, thinking about what kinds of things people need right now, what’s missing, and I’ll start making things from there. And often at the end, I’ll look at the result and say: ‘Ah, so that is what I wanted to make from the beginning.’”

His thought process for fall resulted in a long skirt made of different bolts of pleated fabric, a midriff-bearing sweater and a bolero-style top with puffy honeycomb sleeves. For men, a standout was a hybrid trench coat/motorcycle jacket and wide-legged pants. His past collections have similarly emphasized layering, texture and fabric; all the textiles he uses are exclusively Japanese.

One part of Ochiai’s design inspiration is easier to pin down. He has a particular fascination with the movies of Gus Van Sant, especially the 2003 film “Elephant,” which chronicles a school shooting partly based on the 1999 Columbine High School tragedy. “I like the sort of naïveté of [the films], but also the visual side, the colors, that kind of thing….I watch [“Elephant”] before each collection. Just naturally, I end up watching it every time,” he said.

Outside of fashion, Ochiai’s days mainly consist of riding his BMX bike between his office and his home in Sasazuka, a residential neighborhood on the western side of the city. Fortunately for him, he appears to be a fan of his hometown and sees it as a fertile place to start a business. “As a creator in Tokyo, you can do whatever you want. You can make anything you want because there’s a very high level of craftsmanship and quality, so the possibilities are endless. It’s a very easy place to be a fashion designer,” he said.

With his focus squarely on the next logical steps to grow his business, Ochiai said he is eager to gain a retail foothold in Paris — he recently hired a new sales agent there — and would love to see an American retailer like Bergdorf Goodman carry his clothes.

The designer is also starting to think about staging a runway show in Paris at some point. “I dream of showing in Paris, but I’m sort of struggling with how to do it and whether I want to continue to show men’s and women’s together like I do in Tokyo or do it some other way,” he said.

Asked if he thinks of himself as an ambassador for Japanese fashion, Ochiai said he’s not sure if he holds that kind of position just yet — but it’s a role he would like to have. “If there was a baton being passed off to the next [international] representative of Japanese fashion, I would immediately raise my hand for it.”