Ford talked about perseverance, setting goals and having a vision.

Tom Ford gets little to no sleep, drinks 10 cups of coffee a day, plays tennis every morning and is teaching his 8-year-old about empathy.

That’s what the Council of Fashion Designers of America chairman told an audience at Harlem’s Fashion Row summit Thursday in a frank conversation about the industry’s realities.

“If you’re aspiring to be a fashion designer or work in fashion, if there’s anything else you can do that would make you happy, do it, and don’t do fashion,” he said. “What I mean by that is, fashion is a relentless business, it is a tough business, it is hard business. As a designer you will struggle every season to think of something that’s meaningful for your customers. Each time you finish a collection, you will think, ‘Oh my God, now what am I going to do?’ But, if you love it, and you’re passionate about it, and you can’t imagine doing anything else, then do it, because it can also be an incredibly rewarding industry. It can be a lot of fun if you approach it the right way, mixed in with those struggles, and it will give you great, great satisfaction.”

In a lively 20-minute conversation with Brandice Daniel, chief executive officer and founder of Harlem Fashion’s Row, Ford shared some of his tips to for success in fashion.

“I think the thing that has helped me become successful is drive,” he said. “You can be the most talented person in the world, you can be the smartest person in the world…if you don’t have that drive, it’s very hard to be successful. I also think you have to have a vision. If you can imagine something you can make it happen. I’ve always had a plan, and I try to keep a five-year plan, even if it’s a three-year plan — certainly you can’t exist in the world without a one-year plan. Close your eyes, imagine what you want to be, where you want to be and how you want your life to be, and then you go for it.”

Turning to the CFDA’s business, Ford discussed the name change of the NYFW show schedule to the “American Collections Calendar.”

“It’s not to take away from NYFW, it’s to support those brands who are unable to show during NYFW in a conventional way. It’s for us to support American brands who have the luxury and ability to show in Paris, for example,” he said. “That is the reality of the world today, we’re increasingly global. Often brands will need to show in China, or in a place other than New York. It just seemed to me we should call it American Collections Calendar. It doesn’t mean we’re giving up on New York. We just want to support the entire industry and how any particular brand needs to show in the best way for them.”

With the CFDA’s Runway360, all of these designers are covered on the platform and people can see all the designers whenever or wherever they showed.

On the topic of the industry’s lag in supporting designers and creatives of color and CFDA’s role in that, Ford said the new fashion week calendar can help with that, too.

Beyond that, the CFDA says it’s making strides to improve on diversity.

Last year, the CFDA launched several initiatives to benefit Black creatives in fashion, including a mentorship program, a donation to Harlem’s Fashion Row’s Icon360, and an in-house employment program. Ford was asked what he learned from all these initiatives that would be helpful to the brands in the audience.

“The Black Lives Matter movement caused me to think in a deeper way and to try to put myself in the shoes of what it would feel like to be a Black person in our culture,” he said. “Whatever your economic or social status, just how that must feel. I hope the Black Lives Matter movement will stay with us, and it’s very important that it doesn’t just fade away and have been a movement that happened at a particular moment in time.”

Further, he said, “It’s very important at the CFDA, and for anyone who has a voice, to follow through with all those things.” The first thing he did when he became chairman of the CFDA, he said, which was before the Black Lives Matter movement, was rebalance the board, to be both racially and gender diverse. And the efforts will have to be ongoing.

“We have to keep reminding people how important this is. We have to keep it going,” Ford said. “At CFDA, we are keeping it going. We’ve created a Black Advisory Board, we’re following through with all our initiatives. It’s very much at the forefront of our thought. We all have a responsibility to make sure we don’t forget this.”

As for Ford, he wants to leave a legacy that reflects that fashion is far from a frivolous industry in terms of what it can accomplish. 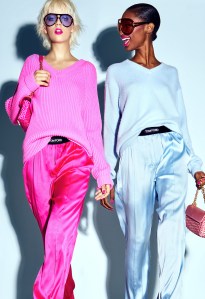 “I think people need to understand the beauty in fashion and life isn’t just some trivial thing. It can actually enhance the quality of your life. This will sound really trite. We all age. Maybe we’re having a bad day. For me, looking at something beautiful can actually be uplifting. It adds an enormous amount to our lives,” he said. “But I also like to think that I am an example of having that vision, persevering, working hard and not giving up, being determined. I really think the most important thing is to believe in yourself and believe that you can accomplish something. Luckily — and luck plays a big part of this — I have been able to do that.”