Tom Ford likes to strike when opportunity arises, which is why he's opened his first store outside the U.S. in Osaka, Japan. The 1,300-square-foot unit is... 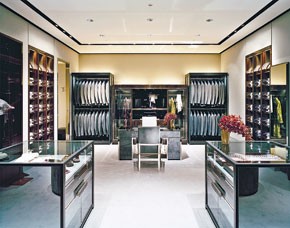 Tom Ford likes to strike when opportunity arises, which is why he’s opened his first store outside the U.S. in Osaka, Japan. The 1,300-square-foot unit is located inside the Hankyu Men’s Store, where the right space came along at just the right time.

“We had planned to open in Tokyo in fall ’08,” said Ford, “but the Hankyu project was interesting as it was the first men’s only project in Osaka and they approached us with a premium position on the luxury floor so we agreed….”

Mark Prendergrast, vice president of Lane Crawford Joyce Group, the Ford brand’s partner in Asia, said Hankyu’s offer was irresistible. “They gave us the very best position in the store, moving other brands for us. We could not say no. And the business has been phenomenal for Tom Ford since the January opening,” he said.

Indeed, the brand was the number-one selling men’s wear label from its first day at Hankyu.

The shop, conceived by Ford and designed by his longtime collaborator, architect William Sofield, features areas dedicated to handmade shoes, custom tailoring, ready-to-wear and accessories. Even eyewear, a major Tom Ford enterprise in Asia, gets its own station. The interior, luxurious and masculine, features a palette of pale grays and shades of sable brown.

Prendergrast said promoting the relatively new brand requires a new strategy for Asia. “[It’s] not so much a challenge, but more of a new way for the consumer to understand and appreciate the way we will ‘promote’ the brand — not through fashion shows and parties, but more by word of mouth and sophisticated media communications. This all fits in very much with the ethos of the brand itself: understated, yet outstanding,” said Prendergrast, who added, “We are very fortunate in having a brand with an amazing creator behind it, who has very much put his own personality into the brand. So the strength of the brand is assured.”

With LCJG, Ford has plans to open locations throughout Asia, Japan and Australia. “Our strategy in Asia is no different than the rest of the world, which is to establish Tom Ford as the first true luxury brand of the 21st century, with the best positioning in each individual market,” said Ford. He added that there are plans to open 87 locations in the next decade; the expansion will include shops-in-shops, freestanding stores and flagships.

Although neither LCJG nor Ford would divulge sales forecasts for the Osaka store or for the brand in the region, Prendergrast believes the potential is huge. “[It’s] enormous. Men’s wear has been overlooked in many ways over the past few years,” he said, acknowledging the category is key to growth in the region, especially in China, where more than 10 stores are slated to open.

Since Osaka, LCJG has opened a second Tom Ford shop, located in the Lane Crawford flagship in Central, Hong Kong. Prendergrast said this is just the first step for Hong Kong as there are plans for a flagship there. Beijing, Shanghai and Tokyo will also have flagships.

Ford said while the U.S. economy is causing worries and Asian stock markets have been jittery of late, he isn’t changing his strategy. “We share concerns about the weakness in the U.S. economy and will monitor it, but it has not had any negative effect on our business. We are in a unique position with very limited distribution and very high demand for our collection,” said Ford, who added he sees no reason to adjust plans for Asia. “The economy is so global you always have to be aware of the potential impact of one on another, [but] we do not have any hesitance about opening and expanding for the same reasons that our business is so strong in the U.S. We will launch very strategically and selectively, targeted at the top luxury clients,” he said.

Ford, who travels to Hong Kong at least twice a year, said the only thing Asia — and the rest of the world — won’t see, at least for now, is a Tom Ford collection for women. “I have no plans on designing a women’s collection at this time. I’m not going back into women’s ready-to-wear yet. I may never. I don’t know,” said the designer. “Right now, I don’t feel I would be able to give it the sort of energy and passion that I once did and that I feel I can give to men’s wear. Women’s fashion changes so dramatically every season, because it’s such a perishable item, you really have to devote 24 hours a day, seven days a week to that. Men’s will be a wonderful outlet for the fashion side of my personality, while allowing me the time frame to work in film as well.”