Tom Murry Returns to Industry as CEO of Raul Peñaranda

The game plan is to add such categories as sportswear, handbags and footwear to his high-end dresses.

Tom Murry and Raul Peñaranda in front of the former Calvin Klein flagship at 654 Madison Avenue,

Tom Murry, former chief executive officer of Calvin Klein Inc., is returning to the fashion industry by taking on the role of ceo at Venezuelan designer brand Raul Peñaranda LLC.

Peñaranda will continue as founder and creative director.

During Murry’s 17-year tenure at Calvin Klein, he oversaw tremendous growth for the brand, which expanded from $2.8 billion in global retail sales in 2003 to nearly $8 billion in 2013. He retired in the first quarter of 2015.

“He’s an amazing designer from Colombia and has incredible taste,” Murry said of Peñaranda, speaking from his home in Palm Beach, Fla. Murry said he was introduced to Peñaranda by Mark Locks, who are all members of the same beach club in Palm Beach.

Peñaranda and his business partner, Larry Haack, have run the company for 10 years and have shown 21 collections. Alexandra Boet is the chief financial officer. This team will stay in place.

The designer makes made-to-measure dresses that retail from $7,000 to $25,000. “Every dress is one of a kind,” said Murry, noting that Peñaranda sells made-to-order dresses directly to consumers. He also makes designer sportswear, from $800 to $2,000, and a diffusion line from $150 to $450. Peñaranda sells the designer collection and diffusion line on his web site, as well as at A Tempo on the Upper West Side in New York.

“What Raul wants me to do is rebuild the Calvin Klein business model with him,” said Murry. “We can do it slowly, judiciously and  have consistent organic growth. Over time we’ll add all the appropriate categories, such as high-end bags and shoes,” he said. Eventually he would like to open stores, and the first one will be on Worth Avenue in Palm Beach, which will be developed by Murry’s wife, Lynda.

Murry is also considering a New York flagship and is in discussions with PVH Corp. about the former Calvin Klein flagship at 654 Madison Avenue, which closed last year. “To me that store is emblematic. We’re ready for it. It’s a big expensive store,” he said, but he figures he can add various categories over time to fill the 20,000-square-foot space.

“If we could get it for a price, and we think it’s workable, we’ll do it. Otherwise we’ll find another location in the city. It would be a dream come true to return that store to its original beauty,” said Murry.

In an interview with Peñaranda Friday, he said, “I wanted to bring Tom in because of his track record, his sensibility, and the leadership with Calvin Klein is something I need to get to the next level.”

“I’m living my dream,” said the 48-year-old designer. “I was always in the shadows of these big fashion houses. I knew it was just a matter of time, dedication and humility that I would be taking a place among the big guys.” He said over the years, when he worked for Donna Karan, Zac Posen and Oscar de la Renta. “You always see them and want to learn the good, the bad, and you want to create your own identity based on who you are.” He said he wants to create pieces that can go from day to night and then clothes to wear to a gala. 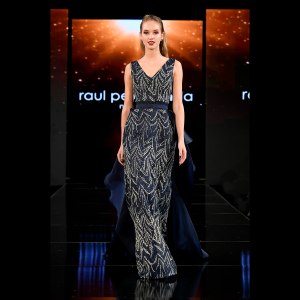 “I want to become the designer for the next generation with a humble heart. For me, I not only want to show an amazing collection, but I want to inspire, I want to educate and ignite a conversation. Fashion has become so hard, I want to be the inclusive guy,” he added.

“I consider myself a hustler because I work hard for other brands,” added Peñaranda. Last year he consulted on design with Nicole Miller and now he’s working on the revamping of Juicy Couture. He also designs a fashion line under his own name for the Baccarat Hotel in New York.

Murry said he’s not investing money in the venture, only his time and energy, but will be looking for financing. “He has a profitable business today,” said Murry. His plan is to add sportswear, outerwear and bags to the dresses.

Asked isn’t this a tough time to be launching a new business, Murry replied, “Yes and no. There will be less competition,” he said.

Peñaranda works out of an atelier in New York, and Murry plans to commute back and forth to New York City from his home in Palm Beach.

Peñaranda recently showed his 21st collection at New York Fashion Week in February called “Shine.” His collections are known for their craftsmanship and luxurious fabrics. 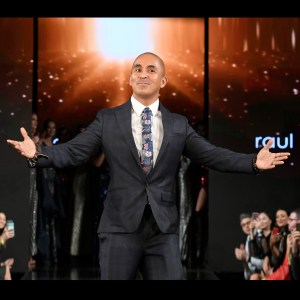 Murry added that the collection features beautiful Latin colors and prints, and is manufactured in New York City. “This guy is a very easy guy to work with. He’s probably the nicest designer I’ve ever encountered,” said Murry.

Peñaranda was born in Cali, Colombia, grew up in Caracas, Venezuela and moved to Miami with his family as a young adult. In 2000, he relocated to New York where he was offered a freelance design position at Liz Claiborne, while enrolled at the Fashion Institute of Technology and Parsons. He worked at such fashion houses as Oscar de la Renta, Donna Karan, Zac Posen and Tommy Hilfiger, in roles such as creative director of merchandise and trend services, senior designer and textile/CAD designer.