The designer quietly opened a store on the Upper East Side, his first in Manhattan, at 956 Madison Avenue. 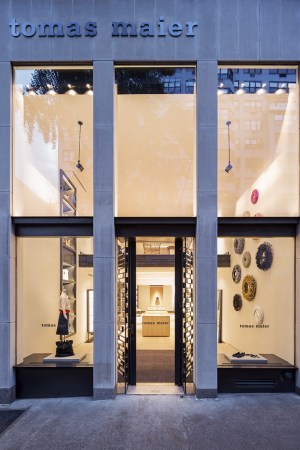 Last week, the designer quietly opened a boutique on the Upper East Side, his first in Manhattan, at 956 Madison Avenue between 75th and 76th streets. It showcases the designer’s expanded collection, which includes an enhanced assortment of women’s and men’s ready-to-wear as well as accessories, many created in partnership with longtime friends and collaborators of Maier. The unveiling marks a significant milestone for the 17-year-old brand and its trajectory after Kering formed a venture with the designer, who is also creative director of Bottega Veneta, one of Kering’s fastest-growing brands.

“We wanted to open here for a long time,” Maier said on Friday morning. “In all the three stores we have had [Palm Beach, East Hampton and Miami, which has closed], we always had New York clients, so it was important to have a store in the city. Thanks to our joint venture, we are now able to do this.”

The venue, featuring 2,800 square feet of selling space, was previously occupied by the DeLorenzo Gallery. The interior is modern yet warm, with oak display tables. Maier was keen to preserve many of the unit’s original elements. “I always liked this store,” he said of the unit, which dates back to 1925. “For me, it was important to keep the integrity and the details — such as the grilles, the metalwork, the door handles, the architectural elements — and then I started to look at the concept around that.”

The two-story space, which comprises the main floor and a mezzanine, features the entire lifestyle concept. The ground floor is focused on wearable and home accessories, including a wall of one-of-a-kind rope mirrors, which can be custom-ordered, created by Paris-based Christian Astuguevieille. In addition to handbags and shoes, there are elegant semiprecious earrings from Osanna Visconti, the designer’s close friend, as well as bold semiprecious beaded necklaces by Florian and hats by Mühlbauer, both from Vienna. There is also a display of Diptyque candles in three scents, each created in collaboration with the designer and priced at $65.

“We worked together for so many years,” Maier said of Diptyque. “I used to buy candles when I lived in their neighborhood [on Boulevard Saint Germain in the early Eighties]. I made three candles that are reminiscent of places where I spend time during the year: Maine, Montauk and Florida.”

Maier is always interested in ways to bring logic to luxury: The interior, which he designed, has central wood cabinets to store merchandise and inset glass vitrines to show off the goods.

“For me, it was very important that everything is in the store,” Maier said. “I don’t like to shop that much. When I convince myself to go shopping, to choose something is a pleasure, but it has to happen fast because time is always limited. So, I like that all the stock is always in the store. You don’t have to go anywhere.”

While this is Maier’s first opening since the Kering deal, there are more in the pipeline. He will open a shop-in-shop at Harrods in January and a second Manhattan store, located on Bleecker Street in the West Village, in April. The designer also plans to return to Miami next year.

Madison Avenue, he noted, “is giving more of the idea of the concept, but every store will be slightly different — it depends on the neighborhood. I always look for a store that has character.”

Maier declined to disclose sales projections, but the Manhattan store represents his first year-round opportunity, as opposed to resort locations in Florida and the Hamptons.

This strip of Madison Avenue is changing. Roland Mouret is opening a few doors down, and Apple is moving into the former VBH space at 74th Street. Several row houses and town houses, adjacent to the Whitney Museum of American Art, are being redeveloped, rendering more potential for luxury retail.

“I think this is a fantastic neighborhood,” Maier said. “For me, this neighborhood is right in the heart of the Upper East Side. I think that with the [Metropolitan Museum of Art] moving into the Whitney, there is going to be a huge advantage for the neighborhood. It will be very interesting.”