Tommy Hilfiger and Zendaya Ready to Rock the Apollo

The TommyXZendaya collection will be shown at the Apollo Theater tonight at 8:30 p.m.

Tommy Hilfiger and Zendaya in fall 2019.

Zendaya and Tommy Hilfiger are ready to rock the Apollo.

Having put the finishing touches on their collection, they sat down Saturday afternoon at the Hilfiger offices to talk about their second TommyXZendaya collaboration of “See Now Buy Now” sportswear that will shown tonight at the Apollo Theater in Harlem.

The show continues with a focus on inclusion, diversity and empowerment, following their debut collaboration in Paris for spring 2019. TommyNow is returning to New York City for the first time since it first premiered there in fall 2016. It has since traveled to such cities as Los Angeles, London, Milan, Shanghai and Paris.

WWD: What was the experience like designing the second collection?

Zendaya: The experience was surprisingly so much smoother and easier the second time because I had a little bit of an idea of what I was doing. The first time around I was having a lot of fun and I was going for it, but was super nervous I didn’t know what to expect. I had all these ideas about what it should be, and how are people going to respond. But this time around I’m just a lot more comfortable and secure in myself and in the designs and everything. I just feel more calm.

WWD: What was your inspiration for the collection?

Zendaya: The inspiration was a continuation from the first collection. It was late Seventies, early Eighties, Seventies glamour, inspired heavily by the powerful women of the time, many on this board behind me. It’s always been an era I’ve been obsessed with — the clothes, the glamour, the effortless glamour of it all. It’s always something I’ve appreciated. Also, the silhouettes are always something I’ve wanted to bring back. We’ve been able to do that.

WWD: How do the two of you work together, and what was the process like?

Tommy Hilfiger: It’s very simple. How do we work together is very unique. I surround her with our team, and basically say, ‘Team, let her do whatever she wants.’ Because she came with such specific ideas which we all thought were great. We love the Seventies. And I love the idea that she wanted to use more elegant fabrics. Because it elevates the brand, and the shapes and man-tailored suiting is phenomenal. We’ve never done animal prints, and wanted to do animal prints, with checks, with playing with different scales of checks  and playing with different scales of polka dots, all mixed together. It’s something we’ve never done as a whole.

WWD: Who do you envision as the customer of this collection?

Zendaya: Everyone. I think it’s made for everyone. As dressed up or as casual as you want to be. The idea of the pieces is always to be easy and have that sense of effortlessness. I just want it to be literally, pick two things off the rack and they’ll go together. When I was picking my outfit this morning, I liked this, and I like these boots, and I just threw it together, and I feel chic and I feel confident, and I feel powerful. That’s the energy behind it. It’s supposed to feel effortless.

WATCH: Tommy Hilfiger and Zendaya Tease Round 2 of Their Fashion Collab

WWD: How important is diversity to the casting? Your last show in Paris was extremely diverse and there was a lot of inclusiveness on the runway.

Zendaya: Of course, I’m inspired by the world. One of the things that was really important to me was the women in my family to be able to wear my clothes. That’s reflected on our runway. I just want everybody to feel seen and represented and included, and feel like they were thought of when we were creating these clothes which they were.

WWD: Why did you chose the Apollo Theater to present the clothes?

T.H.: Because we wanted to do some sort of iconic presentation in New York. Zendaya said, ‘what about the Apollo?’ And we said, what about it. We’d love it. We tried to get it in February but it was booked so we moved it to Paris. But in February, we reserved it for Sept. 8. Now we’re bringing it to life. 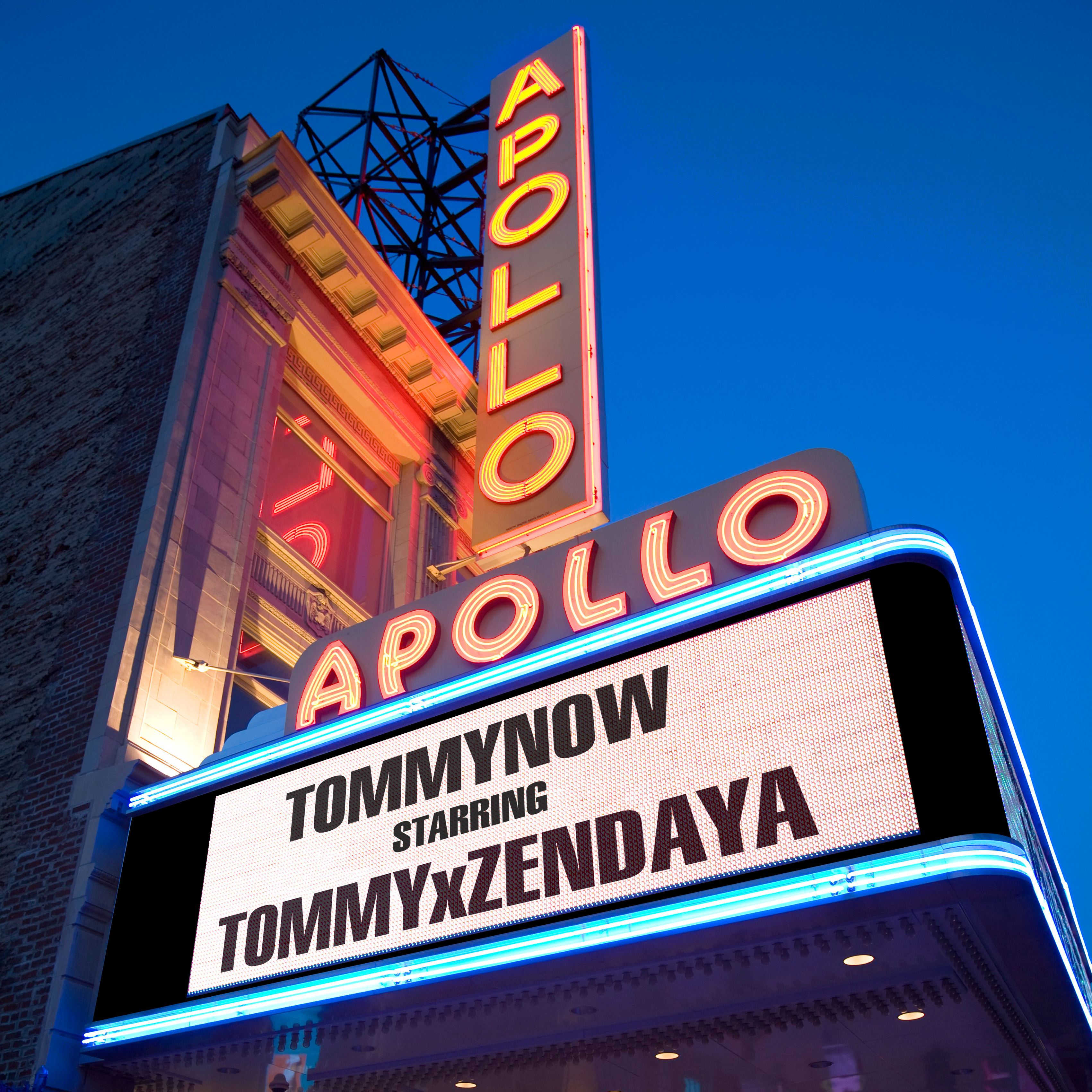 The Apollo Theater is the location of the TommyXZendaya fashion show Sunday.  Alamy Stock Photo

WWD: Are you having models once again from the Seventies?

T.H.: We have a mix of models. They’re very diverse. We’ve left no stone unturned. We have different ages, we have different sizes and we have different backgrounds. I think everybody will be really excited with the casting. We have 59 models, more models that we usually use. The looks have really fallen into a great place. Sometimes it takes a while to do the styling, and the styling just came together. As the girls came in, we didn’t have any snafus. Sometimes we have. It moved very smoothly. Zendaya and her team work. They’ve been here every single day from morning until night, working on every single detail. It’s been a great collaboration with our team and their team.

WWD: Will this collaboration continue after these two seasons?

Zendaya: Not as of now. They’re probably like, ‘No more.” Listen, it’s his fault, he said I can have whatever I wanted so I took advantage of it.

WWD: Are the pieces more expensive than your collection is typically?

T.H.: Yes, they’re all made in Italy, hand-beading, a lot are made by hand. They’re more expensive and more sophisticated. They’ll be sold in our flagship stores, online, see now buy now, we’re dropping them in Nordstrom in America, and stores all over the world. It’s another level of business we really haven’t been in in a substantial way, but this has led us into this business which is great for the halo of the brand.

WWD: Do you have an interest in doing your own collection at some point?

Zendaya: I don’t know. I think it’s a lot of work. The Tommy team has been so crucial in all of this. They just take the ideas and they mold them and they’re able to turn them into real life. That’s more than half it takes to make all this happen. Without that, I don’t know.

T.H.: What she’s not telling you is she’s such a perfectionist. To do her own line and to do her own brand would mean she’d have to put this movie on hold, this TV show on hold, this recording contract on hold. She would have to focus 100 percent of her time. If she did do that, it would be incredibly successful.

WWD: Where does this fit in in the hierarchy of all your interests and talents?

Zendaya: I don’t know. It’s just kind of part of it. I have this thought that if you have passions, or if you have things you have an urge to do, you should do it. If you have an opportunity to do it, one should leave no stone unturned. I just want to be able to explore all the facets of who I am as a creative, and all of myself, whether it be through acting or music, whatever. Fashion is very creative, to me it’s an art form. I want to be able to push myself and get better and learn more.

WWD: How are you enjoying the whole “Euphoria” experience on HBO?

Zendaya: Great, I’m just proud of what we’ve created. Proud of my cast and crew and something I’m excited to go back to.

WWD: How do you balance it all?

T.H.: She’s very, very  mature. She’s already a fashion icon, but my prediction is that she’ll be a global fashion icon, whether she does her own line in the future or not, because of the way she puts herself together, and the way Law (Roach, her stylist) puts her together. She’s iconic in her own look and she changes like a chameleon, from event to event and place to place, and people are intrigued with that. They love seeing what she’s going to wear next. I don’t know what being a fashion icon really gets you, other than a lot of respect and a lot of paparazzi. She’s naturally a fashion icon without even putting her mind to being a fashion icon.

WWD: What have you learned from teaming up with Tommy?

Zendaya: I’ve learned a lot. I’ve learned about what it takes to make clothes. It’s so much more, it’s a business. It’s so much more than T-shirts or pants. I’ve been able to learn about the business side of things too, which I’m very excited about. As a young person, you always want to learn about the business that you’re in and be more aware and be better prepared for the future. That’s an experience and knowledge I’ll take away forever. He [Tommy] always wants to learn and to grow even though he’s at a certain level. He can say, ‘I’m Tommy Hilfiger, I don’t have to listen to anybody.’ He is so open to new ideas and new thoughts, and for me to do what I want and be creative, and guide and nurture these ideas without controlling them. This is why you are who you are and why this is what it is. That’s what relevancy is. It’s always being able to stay up with what’s going on. The only way to do it is to help, respect and give a helping hand to the younger people coming up and respecting their opinions and their values and their ideas and their creative minds. I hope to be like that as I grow in this industry as well.

WWD: Do you have any favorite pieces in the collection?

Zendaya: Yes, I have a few. I love a good suit and I made like 20. All the suits. And the coats. I love the coats.

Tommy’s Show at the Apollo Theater to Feature New Initiatives