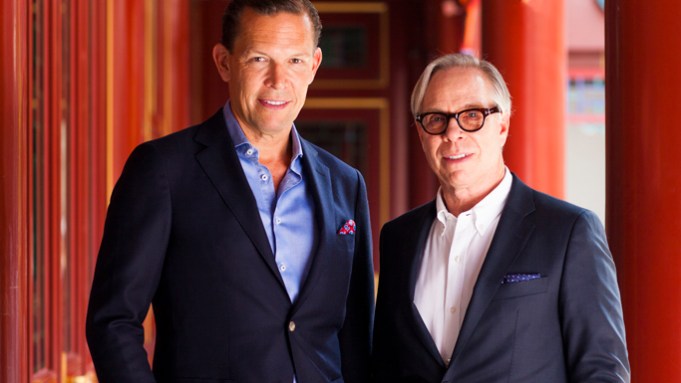 BEIJING — In sporting parlance, Tommy Hilfiger is making an offensive play for the China market.

Tuesday night, the 64–year-old designer restaged his fall-winter football-themed runway show at a gasometer located in the city’s 751 D-Park, a design and fashion development hub. Models strutted on a large pitch as the audience of about 800, including Olivia Palermo and Chinese actors Zhang Ziyi and Deng Chao, looked on from bleacherlike seating.

To complete the Super Bowl atmosphere, a large Jumbotron was suspended from the converted gas tank’s ceiling.

The event also marked the opening of the first Tommy Hilfiger flagship on the Mainland, a store that will, in another first, offer the premium men’s and women’s lines Hilfiger Collection and Tommy Hilfiger Tailored to Chinese customers.

Hilfiger said the brand has a loyal following here.

“They like that it is casual; that it is aspirational: that it’s cool,” he said in a preshow interview at Beijing’s Waldorf Astoria hotel.

The fact that global fashion has become more homogenous in recent decades also helps, he said.