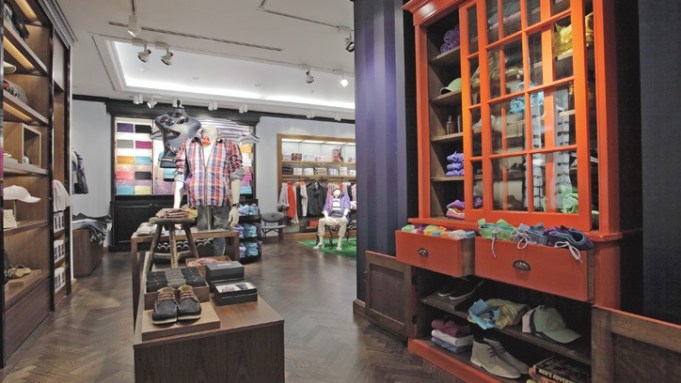 Among the grand ideas that Tommy Hilfiger has for its soon-to-open 8,850-square-foot European flagship on the Champs-Elysées in Paris is a wall of spinning cubes that flip every 30 seconds to form the Hilfiger, American or French flag. There is no better metaphor for the brand’s retail strategy over the past decade than that ever-changing red, white and blue wall: Hilfiger has been a dynamic force, making itself at home on both sides of the Atlantic and beyond.

More than a decade ago, even when the brand was navigating rocky waters as sales and profits fell and the name fell out of fashion favor, the company was committed to making inroads abroad, especially in Europe, a market that now generates about 50 percent of overall sales.

“I wouldn’t call what we did in Europe a push — it was more a pull,” said Daniel Grieder, chief executive officer of Tommy Hilfiger Europe. “We started by positioning ourselves in the best stores, we fine-tuned the product, and made sure we were attracting the right customers. We went slowly: First we launched men’s, then denim, then women’s wear. We made some small mistakes — but no major ones, touch wood.”

The strategy was to enter the European market with a more premium offer than in the U.S. — and it worked. The first stand-alone store under the new regime opened on London’s Oxford Street nine years ago, and today, there are about 400 stores in Europe, a mix of larger units that sell all of the Hilfiger lines and smaller ones that focus on one product category, such as denim, children’s wear or sportswear. Grieder said that, on the whole, European customers are very quality- and fashion-driven, and far less price-sensitive than their American counterparts.

For the past three years, the brand has been opening an average of 80 shops a year in Europe, and the trend is set to continue. The label — which Grieder said is clearly positioned as “premium lifestyle” — competes with such names as Hugo Boss, Gant, Ralph Lauren, Lacoste, Diesel and Replay. Germany, Austria, Switzerland, and Spain are currently Tommy Hilfiger’s largest European markets, and Grieder said it’s now time to focus on France, Italy and the U.K., which he said offer “huge” potential. The speed of retail expansion in those markets, he said, will depend on how quickly the right retail opportunities come up, but it’s likely the company will stick to its annual plan of 80 stores.

The new Paris flagship, which is housed in a former bar and restaurant on the Champs-Elysées and has neighbors including Gucci, Hugo Boss and Nike, is set to open in October.

“That store was a pinnacle for us — and the beginning of a new path,” he said. The focus, he said, will continue to be on color and pattern, with the aim of creating warm environments with a residential feel. Wisehart’s team creates that look with a mix of found pieces such as vintage drapers’ counters and brightly colored, midcentury modern lamps, and made-to-order, overdyed Persian rugs in hot pink or green. Depending on the store, he’ll also add glossy and matte tonal striping on walls, hand-painted wallpaper and specially commissioned art to the mix.

The Hilfiger team has also earmarked Russia for aggressive expansion over the next five years, with plans for 100 stores in Moscow, Saint Petersburg and a web of secondary cities. Grieder said there are plans afoot, too, for stand-alone accessories stores in Europe, and that accessories will be given more prominence in existing stores. He said the first stand-alone accessories stores won’t open until the second half of 2011 at the earliest. In June, the company said it was winding down its European license for handbags and small leather goods, and would take the business in-house as of spring 2011.

Europe isn’t the only market where the brand is expanding. Today, there are 1,000 Tommy Hilfiger stores in 65 countries, about half of which are owned and operated by the company, with the remainder run by licensees, franchisees and distributors. According to Fred Gehring, global ceo of the Tommy Hilfiger Group, the brand is further penetrating emerging markets as well. Hilfiger has recently assumed direct control of its wholesale and retail distribution in China from its licensee, Dickson Concepts.

“Once the deal is concluded, we plan to strongly grow the business across the market, including in second- and third-tier cities,” he said.

In Singapore, the brand has recently opened a Hilfiger denim store in Marina Bay Sands. In the fall, it will open a sportswear store in the same location. Meanwhile, a flagship on Singapore’s Orchard Road is set for next spring.

“We are in discussions at various stages of maturity to further expand the business in Southeast Asia, and in markets such as Vietnam, Indonesia, the Philippines, and Thailand,” Gehring said. In India, he added, the business is growing in “healthy double digits.”

There is also a lot of potential for growth in South America, Gehring said. The company has been present in that market for more than 20 years, together with a regional partner. The largest Tommy Hilfiger store in the region is a 10,000-square-foot unit in Lima, Peru, that opened in 1997. Gehring said a 5,200-square-foot flagship in Punta del Este, Uruguay, is undergoing renovation and slated to reopen in October.

Gehring said the company is looking into further expansion in Brazil, where there are currently 13 Tommy Hilfiger stores, including a 5,400-square-foot flagship on São Paulo’s luxury shopping street, Rua Oscar Freire. He said that, worldwide, Tommy Hilfiger will continue to operate with a mix of wholly owned stores and units run with local partners. “In some markets it has proven beneficial to directly operate the business while in others, having a trusted partner is still the best option,” he noted.

The U.S. and Canadian markets, where there are a total of 233 stores, are in consolidation mode, according to Gary Sheinbaum, ceo of Tommy Hilfiger USA. “The stores are performing very well, and we’re in no rush to open a lot of stores quickly. We’re taking a measured approach,” said Sheinbaum.

He said there has been no price resistance in the U.S. and Canadian markets, and that business continues to tick steadily.

Possible challenges would include “nervousness about the economy and unemployment, but we haven’t felt any of that yet,” Sheinbaum said. “And we’ve been benefiting from quite a bit of tourism, much like the international stores.”

Grieder said he is upbeat about the future, despite the uncertain times, noting, “We offer well-designed product at a good price, and we have a diversified business model. Our name and brand will serve us well in the next years.”