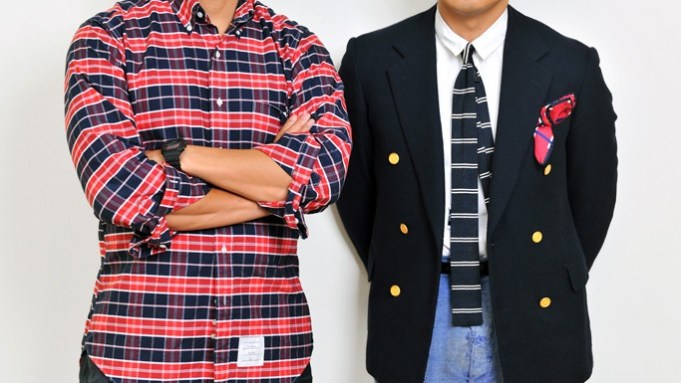 TOKYO — One of Japan’s best-known fashion brands has set its sights on a new tomorrow with a distribution deal covering the U.S., the U.K. and Hong Kong. The project marks the first international venture for Tomorrowland since the late Eighties.

Hiroyuki Sasaki founded Tomorrowland in 1978, and, since then, the company has grown to include a network of 160 stores across Japan and a large portfolio of its own brands as well as partnerships with major international labels such as Isabel Marant and Dries van Noten. And starting this fall, Tomorrowland’s men’s line will be available at Barneys New York in the U.S., Selfridges in the U.K., Lane Crawford in Hong Kong and online at Mr Porter. International distribution will be handled by Montreal-based Want Agency, which also holds North American distribution rights for brands such as Maison Kitsuné and Arc’teryx Veilance.

Want Agency is run by brothers Byron and Dexter Peart, who are fans of Tomorrowland’s apparel and have had a relationship with the company for nearly a decade. About a year and a half ago, they proposed helping the brand realize its international expansion goal.

“We just didn’t have this ambition to go abroad badly, but [the Pearts] kind of started it and gave us this confidence. [We thought], if these guys who have been in fashion for a long time love our brand, then maybe we can go abroad and do it successfully,” said the founder’s son Yuhei Sasaki, who took over as chief executive officer of Tomorrowland at the beginning of this month. His father remains chairman.

Hiroyuki Sasaki has said that, from the time he started the company, his goal was to develop an international business. In the late Eighties, he made his first attempt by opening boutiques in Florence and Paris, but those didn’t last more than three years before shuttering. Since then, despite partnering with and selling several international collections in Japan, Tomorrowland’s own branded business has been wholly domestic.

Yuhei Sasaki believes the timing for an international launch is now right, perhaps because more people already are aware of the brand due to its large presence in Japan.

“In Tokyo itself, we have 30 stores, and of course our buyers and my father himself go to Milan, Paris, London and New York every season,” Sasaki said. “And as [we] go out and buy brands abroad, we found that Tomorrowland is seen in Tokyo by all the international fashion people.”

Tomorrowland’s aesthetic is classic with a modern edge, and it is known for its use of unique, high-quality Japanese fabrics, the majority of which are developed exclusively for the brand. Company director Daisuke Nakajo said that, often, Tomorrowland will incorporate traditional Japanese production methods, using them in unexpected ways that make them relevant in the context of today’s trends.

For the first season, roughly 30 percent of Tomorrowland’s men’s collection will be available at international retailers.

“From the collection as a whole we chose the most special things, the strongest things,” Nakajo said of the wholesale offering. He added that while the styles and colors are the same as those sold in Japan, certain adjustments were made to the sizing for the global launch: Two other sizes were added to the line and the length of many pieces was increased. Prices are between 50 percent and 70 percent higher than the Japanese retail prices, but Nakajo said they are on par with market standards. Sasaki declined to provide a sales forecast.

Tom Kalenderian, executive vice president and general merchandise manager of men’s wear for Barneys, said the collection is exclusive to the retailer in the U.S. and currently being sold at its Madison Avenue flagship; the line will soon be added to the retailer’s online offering, as well.

“The Tomorrowland collection offers great value [and] sophisticated styling with good quality,” Kalenderian said. “They created tailored separates at sensible price points: The jackets are priced at $795 to $895, shirts at $295 to $325 and trousers at $295 to $350. Tomorrowland was a natural extension of the ‘smart’ and ‘clean’ casual dressing that we have been featuring in men’s sportswear. We see it in the same space as collections like Margaret Howell, Kolor, Barena and Officine Generale, etc. The fact that it was something never seen before in the U.S. and designed by such a well-respected Japanese retailer made it all the more attractive.”

For now, only the men’s collection is available outside of Japan, a decision that was made largely for practical reasons, Sasaki said.

“For us, men’s is more clear compared to women’s because, with women’s, we have five different house brands. With men’s, it’s only one, and it was easier to bring everything together,” he said.

But Sasaki said the women’s offering likely will follow soon and that talks about when this might happen are ongoing. He also said that the brand plans to continue to grow its international distribution network and that he hopes to open its first overseas store within the next five years. So far, Sasaki said the men’s collection has been well received.

“It motivates us. We’re happy our products, our designs, our creations are selling well in the best stores in the world. It feels good, of course,” he said. “We have about 1,000 employees, and if Tomorrowland goes abroad and the collection is sold in international stores like Lane Crawford, Barneys and Selfridges, it’s a good statement for both internal and external people that are involved in the brand.”