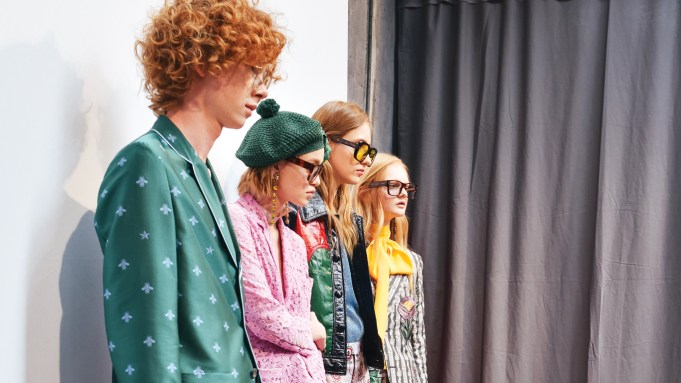 When Caitlyn Jenner, formerly known as Bruce, shared her new identity with the world earlier this year, she probably didn’t know how right on time she was. In just four hours, her Twitter account reached one million followers — a new world record for the Olympic gold medalist. But the interchangeability of male and female characteristics not only means big headlines, it also means big profits.

This spring saw Selfridges unveil Agender, a unisex shopping experience, which helped buoy sales across the London department store; Alessandro Michele resorted to pussy-bow blouses and body-conscious lace tops in his debut for Gucci, ushering in a new era for the Italian brand; while female models have extended their services to men’s shows, walking for Gucci, Giorgio Armani, Givenchy and AMI, among others.

“I think this spring was really hot for unisex, and with our retail concept we tapped right into the zeitgeist,” said Selfridges’ creative director Linda Hewson about the gender-neutral space, where sales “exceeded expectations.”

Hewson noted that although she and her team had done an edit of the roughly 40 brands, shoppers made purchases not only at the unisex store but continued to spend on the label they discovered on other floors as well. “This was particularly true for the more avant-garde brands. Unisex labels Nicopanda and Toogood, meanwhile, performed so well, we kept them after the project was over,” she said.

Selfridges is looking into ways of making this a permanent venture, while adding unisex labels into the mix for next spring. Hewson noted that if retailers can get around logistics, find space and solutions for sizing, there is great opportunity for department stores especially, which are eager to reinvent themselves in the digital age. “There are very traditional notions of what department stores are, but this allows us to reach out to a new clientele and spark their interest,” she said.

“The merging of gender lines is also cost-effective for apparel brands,” agreed Bernadette Kissane, apparel and footwear analyst at Euromonitor. “It reduces redundancies and allows greater freedom in personal expression — for both consumers and designers. Fashion shows, for instance, are extremely expensive, so to merge women’s wear and men’s wear ranges in one show is actually a good move. Also, today we are bombarded with a crazy number of designers versus 20 years ago. This means that brands need to find ways to stand out and be seen. Androgyny helps create a more cohesive brand message and brand image.”

With Hedi Slimane as a pioneer — who during his first tenure at Yves Saint Laurent in the Nineties started dressing women in men’s wear and later made the skinny jeans at Dior Homme a must-have — Acne, Vetements, Hood By Air, Maison Margiela and most prominently J.W. Anderson in his double-capacity as artistic director of Loewe as well as his namesake label, are today among those who propose interchangeable looks, feeding into the unisex movement from the top down.

Ultimately, Kissane noted, whether this turns out to be a clever marketing ploy or an indication of changing cultural attitudes remains to be seen. “I do think it will continue, but it will take some time to be commercialized. For now, it’s restricted to high-end designers rather than Zara and H&M. But we do see that brands are increasingly using it as a playground.”

Hennes & Mauritz-owned & Other Stories, for one, is busy creating a diverse brand image. “We’ve worked with many different women, both in age, ethnicity or gender,” said a spokeswoman for the label, which in August launched a transgender campaign created by an all-transgender team, including the models — Valentijn De Hingh and Hari Nef — photographer, stylist and makeup artist.

To make sure the trend doesn’t stay a flash in the pan, the brand has pledged to “continue working with [transgenders] as we’ll also continue working with older women or any other inspiring women. Next Valentine’s Day, we’ll launch our third ‘Love Story’ with a female couple who are also partners in real life — not just for the photo shoot.”

The spokeswoman noted further that thanks to its diversity, & Other Stories has seen male customers in its store ever since it launched in 2013. “Although our collections are designed for women, men are as welcome,” she allowed.

The movement is drawing bigger circles. “The idea is to make transgender accepted by society as something natural — not a freak,” said Matea Hoffmann, who is setting up a creative transgender agency in Berlin. Slated to open in 2016, the agency is to gather transgender talent, including models, photographers, stylists, dancers and performance artists. “I’ve been scouting [talent] for the past five years for other agencies, and although it’s difficult to make a business projection, demand has been definitely growing. This is also a way to give the topic more visibility. Gender is not this or that — there are many levels in between. And I don’t think it’s just a trend. It’s a way for people to express their identity. It has just gotten so much easier to share in the digital age.”

Emmanuel de Bayser, cofounder of The Corner in Berlin, agreed that “the unisex movement is in full swing.”

“There are no real trends anymore. Everything is allowed, which is great because everyone can find something that fits,” de Bayser said. The retailer said he stayed clear of the more feminine pieces in the Gucci and Loewe collections, because he didn’t think his customer was ready for them, but acknowledged that in the long run, the trend would open a door to a new market. “The romantic pieces for men at Dries [Van Noten] are already bestsellers. Céline’s slip-ons have sold well to men, while Givenchy’s men’s sneakers and T-shirts are bought by both genders alike. There is really a sense of killing two birds with one stone,” he said. “In the end, the shift in gender roles increases the collections’ universal appeal.”

Gucci said Michele’s first efforts got off to an “enthusiastic” start.

“At retail, the first indications are that the cruise collection is being strongly appreciated by Gucci’s existing clientele and also new customers who are especially interested in the more directional items. We are hearing the same feedback from our wholesale partners,” said a Gucci spokesman.

Designer Alexandre Mattiussi, whose buzzy men’s wear label AMI attracts a growing number of female customers, said he sees the desire to stand out in the crowd as a main driver. “Today’s mass-market culture means that people have started dressing in the same way, but girls no longer want to look alike,” the designer said. “And men’s wear offers a simple solution to the problem: an opportunity to be different. There is something supersexy and hyper-sensual about the image of a woman who wears her man’s sweatshirt or coat, and who can be your buddy, too.”

Mattiussi noted that about 10 percent of his clientele today is female. “We have decided to play along and communicate on our brand accordingly, hiring women for our runway shows and featuring them in the look book. That freedom to play with clothing and codes is also a force of our society. With all the misery that is happening right now, I think it’s great that Gucci is showing a collection [for men] that is romantic and gourmand. Romanticism is the strongest weapon we have against this sadness. I don’t think what Gucci did would have resonated as strongly three, four years ago.”