A recent round of share swaps let some of the private fashion company’s early investors cash out with very healthy returns. 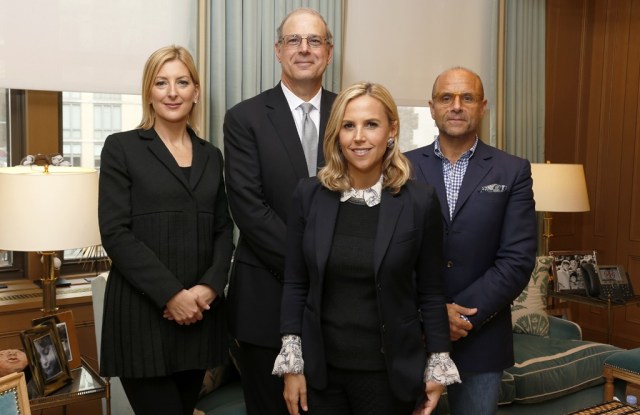 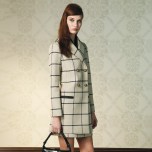 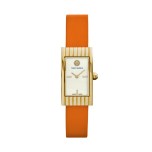 Tory Burch’s stock is on the rise.

A recent round of share swaps let some of the private fashion company’s early investors cash out with very healthy returns and valued the firm at $3.5 billion — an increase of about $1.25 billion over two years ago, according to sources.

That’s a lot of ballerina flats. And another sign that the firm is ready for primetime and perhaps closer to an initial public offering, even though co-chief executive officers Tory Burch and Roger Farah have both declared their affection for operating away from the klieg lights of Wall Street.

Sources said a total of $200 million worth of the company’s shares traded hands in the recent stock swap, with its largest investors buying out people who held smaller stakes. A spokeswoman for the company declined to comment.

Longtime shareholders Access Industries and Tresalia Capital as well as BDT Capital Partners and General Atlantic, which bought in late in 2012, are all believed to have kept or raised their stakes.

The last time the company raised money was in late 2012 in a deal that ended in a messy legal battle between Burch and her ex-husband Christopher Burch over the now-defunct C. Wonder. Prior to the sale, each of the Burches owned 28 percent of the company.

Although Christopher Burch held onto some shares after that deal, it’s not clear whether or not he still has stake in the firm and he declined to comment for this article through a spokeswoman.

The 2012 stock sale brought BDT and General Atlantic on board and, according to numerous sources, valued the company at about $2.25 billion. One financial source said that at the time, that amounted to roughly 15-times the company’s earnings before interest, taxes, depreciation and amortization of $150 million.

So the company’s value appreciated a total of 56 percent over 2013 and 2014 — that’s better than rival Michael Kors Holdings Ltd., which fared on the public market with a 47 percent stock gain, but short of Kate Spade & Co.’s 157 percent jump. Coach Inc., which also plays in the accessibly priced handbag space, saw its stock fall 28 percent over the two years.

Those companies all garner higher valuations than Tory Burch, but their stocks are also constantly trading on the open market and reacting to the latest and variable winds of the financial markets. (Kors has a market capitalization of $14.9 billion, while Coach weighs in at $10.7 billion and Kate Spade at $4 billion). In the case of the Burch share sales, market forces are also at work and the price reflects the belief on the part of larger shareholders that the company will keep growing and the willingness of smaller ones to cash out.

The share sales at Burch do not have any impact on control of the firm or operations. But the company is said to have had a good holiday season and it’s useful to check the market and reset the company’s value from time to time since private stock sales set a baseline should the company take the plunge for an IPO.

The company seems to be picking up momentum, particularly with the arrival of Farah.

Hiring the former president and chief operating officer at Ralph Lauren Corp. was seen as a coup for Burch. Farah is widely regarded as one of the best ceo’s in the fashion world and his arrival cast Burch’s already well-regarded business in a new light for investors.

“There are not a lot of brands today that have the momentum that Tory Burch does and now they have with Roger Farah, I think, exceptional leadership,” said Kim Vernon, president and ceo of the Vernon Co. consultancy.

“If any apparel brand would have a higher valuation it would be Tory Burch,” Vernon said. “They’re still in growth mode, and there’s still tremendous value to create. It would not surprise me if there were some friends and family, early investors who would like to transact out considering the value that’s been created from the first couple years to today.”

Farah isn’t the only sign that Tory Burch continues to think big. Former Wal-Mart Stores Inc. ceo Lee Scott is also on the company’s board.

Those and other indications that the business is starting to expand made it a good time for some early friends and family to sell — particularly given how much Burch has soft-pedaled the prospect of an IPO in the near future.

“We enjoy being a private company,” Burch told WWD when Farah was hired in September. “I think having someone like Roger come on board really helps us to do things that we see we want to do and really have control.”

For his part, Farah said: “Being private is very attractive to me. I did not want to be in a public company. I think this company has the ability to look long-term in how they build the brand globally and how they make decisions. They’re extraordinarily well-financed and have tremendous cash flows that allow reinvestments and good ideas. As a private company, really rallying around Tory’s vision, there’s a lot we can accomplish.”

While adopting a slow-and-steady strategy, the Burch business has become more aggressive about expansion in the last 18 months. Beauty products were added in 2013 and watches came last year.

But as measured as Burch has been, her investors are not necessarily as patient, even though they are sitting on significant gains.

Some of the company’s backers are believed to be angling for an IPO this year or next, while others are willing to wait until 2017 or 2018.

The company, which was founded in 2004, is said to have surpassed $1 billion in retail sales last summer and has 2,500 employees and more than 3,000 points of distribution in more than 50 countries. Handbags and footwear account for about 80 percent of the business. And 75 percent of revenues come from the U.S. That translates to relatively fat profit margins for fashion and room to grow abroad.

It’s a story that big-money investors are going to want to sell on Wall Street sooner or later.