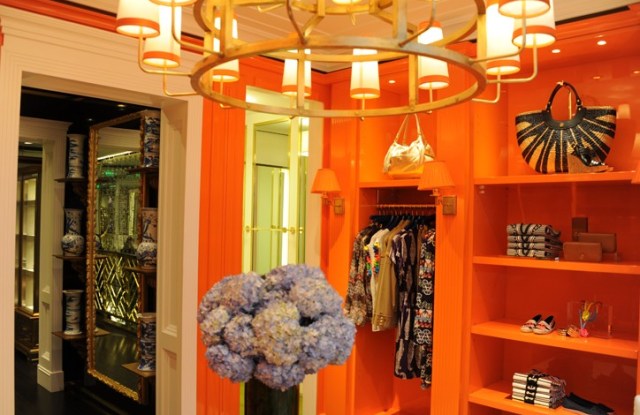 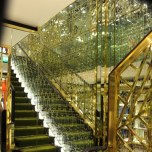 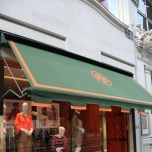 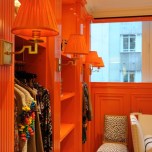 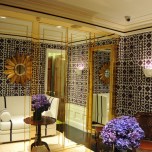 LONDON — Tory Burch is transporting her American lifestyle concept to Europe with her first stand-alone store here, joining one she already has opened in Rome.

“We Brits can do hard-core glamour, but what this city can use is some casual glamour — and that’s what Tory delivers,” said Richardson.

The 4,200-square-foot store spans two floors and is housed in a 19th-century town house. The space was most recently a haberdashery and was the site of one of the early Louis Vuitton stores. It has moss green floors, gold leaf mirrors, orange lacquer details and a tented ceiling with a skylight.

The space has a residential, Park Avenue-meets-Palm Beach feel with a bohemian twist. There are raffia rugs, plum snow-leopard curtains, purple ikat-inspired wallpaper and a collection of Japanese Imari vases. Upstairs is a VIP and special-events area that has the warmth of a living room.

Burch said she was excited about opening in Europe and watching the shopping patterns.

“Bond Street gets British as well as international shoppers, so it will be interesting to see how the shop evolves. We also plan to use these stores as a laboratory — and experiment with new categories and exclusives,” she said.

The designer added she is mulling the idea of doing home — “in a small way” — and testing it in London. She will also be stocking some eveningwear, with an emphasis on cocktail. She said her fall presentation in New York next month would include a capsule collection of eveningwear.

The brand will continue to sell in the U.K. at stores including Harrods, Selfridges and Harvey Nichols.

Later in the week, Burch headed to Rome to cut the ribbon on her first Italian store, a 2,000-square-foot unit on via del Babuino, the street that runs between the Spanish Steps and Piazza del Popolo. The store, she said, is “very modern for us,” and is inspired by one of Donald Judd’s sculptures. It has been open for several months already. She said the company is looking to open stand-alone stores in Germany and France, and is waiting for the right real estate opportunities.

The company, which has 36 stores in the U.S. and nine internationally, has 14 openings planned for this year, mostly in the U.S. and Asia. In the spring, Burch and her team will head to the Far East to open a second unit in Hong Kong, as well as stores in Taiwan and Beijing. In the U.S., stores are planned for Madison Avenue, Los Angeles, Dallas and Chicago. The stores in China, Europe and the U.S. are all directly operated, while the brand has partnered with Samsung in Korea and Mitsubishi in Japan for retail outlets in those markets.