International now accounts for an estimated 30 percent of the firm’s revenues. 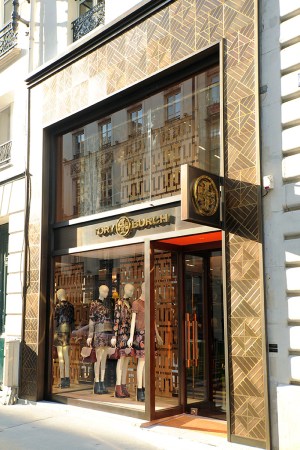 PARIS — Tory Burch has chosen a high-profile moment — haute couture week in Paris, which begins in earnest today — to unveil a new flagship here at 412 Rue Saint-Honoré, the latest leg in her steady European expansion.

“Paris is so important from a global perspective, being such an important city for fashion and luxury,” Burch said in an exclusive interview about the 4,200-square-foot unit, which quietly opened to the public July 1. “And Paris women are so inspiring.”

The designer and architect Daniel Romualdez preserved the residential feel of the narrow 19th-century edifice, and the boutique unfurls as a series of salons over three floors, linked by a curved staircase with a spindle balustrade. It is the designer’s eighth freestanding store on the continent.

“Europe is a great market for us,” Burch said, noting it and Asia are the two main expansion frontiers for the New York-based brand, whose programmed openings for this year also include locations in Prague; Santiago, Chile; Cairo; Kuwait, and Hong Kong.

The privately held company does not disclose figures, but market sources estimate that close to 30 percent of revenues are generated internationally, with Europe representing about 10 percent of the total.

“Between Europe and Asia, we have good opportunities,” said Burch, describing a “careful” approach to expansion hinged on finding the right locations, as was the case in Paris.

Rue Saint-Honoré has become one of the hottest strips in the French capital, prized for its proximity to luxury hotels and the variety of nameplates, from marquee Europeans to contemporary French fashion chains. The block Burch occupies, for example, boasts boutiques by Max Mara, Valentino, Mulberry and Furla, but also & Other Stories, part of Sweden’s Hennes & Mauritz, and the French banner Berenice.

Burch made her initial steps in to Europe five years ago, planting her first boutique in Rome. The company began wholesaling in France in 2008, and now counts 12 doors in the country, plus a French e-commerce site.

She described her European development as unhurried, one hinged on a “cluster” strategy of multiple locations in key cities, rather than scattershot openings over wide geographies. “It’s not a race for us,” she said.

For example, she called Germany “a great market for us,” with latitude to open more locations beyond the current Munich foothold.

Burch’s Paris volley comes at a time when more American fashion brands are planting roots in the French capital, with Coach plotting a fall opening farther up Rue Saint-Honoré. Earlier this year, J. Crew entered the market with a women’s-only unit in the Marais district, while Tommy Hilfiger christened a second Paris flagship on the Boulevard du Capucines.

Burch noted Parisian women have been shopping her brand online, and at shops-in-shop in Galeries Lafayette and Le Bon Marché, suggesting they relate to the “easy elegance” of her bohemian-tinged fashion proposition, targeted at women with busy lifestyles.

The designer aims to cultivate a local clientele for the Paris flagship, in addition to the waves of tourists from Asia and Europe that gravitate to the French capital. “We see a lot of potential. Paris remains a leading destination for luxury travelers,” she said.

Higher floors contain rooms dedicated to homewares, and other accessories such as watches, jewelry and eyewear, culminating with a trio of shoe salons and an airy room for ready-to-wear.

A VIP room is tucked on the fifth floor, dressed in iris-print chintz and appointed with a comfy sofa. Dotted throughout the store are black-and-white photos of Burch’s glamorous, globetrotting parents.

Her next big project is her Tory Sport initiative, to be unveiled during New York Fashion Week in September. “It’s going to be more premium sport. It’s not going to be a second line at all,” she said, hinting the new “function-meets-style” brand would get its own Web site and distribution strategy.

“We’ve gotten amazing feedback. All the men I’ve shown it to want to wear it,” she said, while cautioning she has no plans to enter the men’s business at present. “Not yet, but I think it would an easy transition to do eventually,” she said.

Burch also created a capsule collection exclusively for the Paris store. Set for September delivery, it spans rtw, footwear and handbags, and boasts crystal and other embellishments. “I wanted it to be a bit more chic and sophisticated,” she noted.

The designer, who is also chairman and chief executive officer of her company, plans to fete the Paris boutique with an in-store cocktail on Tuesday and an after party in a garden off Place des Vosges. Word has it Ms. Lauryn Hill and Q-Tip are to perform.

“Paris has long been one of my favorite cities to visit,” Burch said, noting that she hopes to spend more time here in future.

“I love it. That’s why I’m working on my French,” she said, lauding the Clingnancourt antiques market, the Musée des Arts Décoratifs, and the Saint-Germain-des-Prés area on the Left Bank, home to quirky taxidermy shop Deyrolles and legendary brasserie Lipp. “They have the best chicken and haricots verts,” Birch said about the latter eatery, throwing out the French term for green beans with a pitch-perfect accent.