The store, which is slated to open this September, is already making quite an artistic statement. 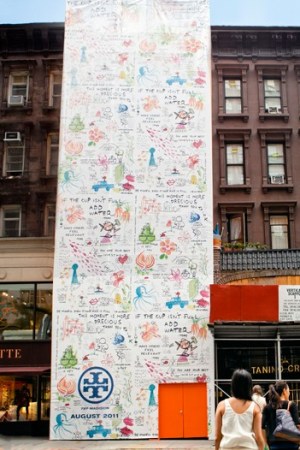 NEW YORK — Tory Burch’s Madison Avenue flagship, which is slated to open in September, is already making quite an artistic statement.

On Thursday evening, a 60-foot-high hoarding went up at the store’s location at 797 Madison Avenue, unveiling a collaboration between the designer and street artist James De La Vega, which will extend into product in time for the opening of the 8,135-square-foot, four-story flagship. Madison Avenue will become the 54th Tory Burch store to open in the world.

“It’s a big deal for the company, and for me personally,” Burch said of the Madison Avenue location. “Having a presence uptown was very important for us. We launched on Elizabeth Street in 2004 and it’s nice to come uptown now. I live uptown, and I used to eat at the Gardenia coffee shop [the site’s previous occupant].”

She said she has wanted to open uptown for quite some time and came pretty close to doing so a while back. “In fact, several years ago, we almost signed a store, but then we had my feng shui expert come in to see it, and he immediately said that we would have a fire,” she recalled. “I didn’t sign the lease and two weeks later Lehman Brothers fell.”

There are no such concerns for this location, and for the store interior, she charged architect Daniel Romualdez with channeling Burch’s taste and lifestyle into the 19th Century townhouse.

“This flagship, being in her backyard, has been one we paid special attention to, incorporating elements from Tory’s own apartment and her newly discovered references,” Romualdez said.

Among the interior elements will be orange lacquer doors, gilt bronze chandeliers, plum velvet curtains and, giving it that extra personal touch, family photos. The store will have a residential feel with a marble and mirror foyer, a fireplace and a library inspired by Madeleine Castaing, and there will even be a furnished outdoor terrace replete with an espresso bar.

She said that the large space will allow her to “try new things and do different events as well. We are not really launching any new categories per se but will be doing some exclusive product, which we are still working on.”

Burch plans to offer her entire assortment in the boutique, including limited edition shoes and handbags in exotic leathers as well as a selection of eveningwear designs.

The hoarding was a perfect opportunity for her to present her collaboration with De La Vega, whose work she became familiar with after visiting one of the participants of her foundation on St. Marks Place and stumbling upon his gallery.

“I started to read about his messaging,” Burch recalled. “His number-one slogan is ‘Become your dream.’ It reminded me of what we were trying to do with the work at the foundation. That in turn was also very important to him, and he said that a collaboration had to benefit the foundation.

“The idea was to bring street art to Madison Avenue, and also with De La Vega’s very positive message which I like about him and his work,” she added, explaining that this is conceived as more of a creative dialogue of sayings and drawings between her and the artist. She plans to unveil merchandise from the collaboration at the store on Fashion’s Night Out, with sales benefitting the Tory Burch Foundation.

Burch said, “I am always interested in exploring collaborations, and I think this is the start to hopefully many such collaborations, whether it’s with different artists or photographers. Art is always such an inspiration to our collection.”

Burch will be quite busy come September. In addition to opening the flagship and planning a big bash there for Fashion’s Night Out, Burch will also stage her first full runway show during New York Fashion Week, though the show venue is still being determined. “It will be eight years of presentations and we wanted to try something new,” she said.