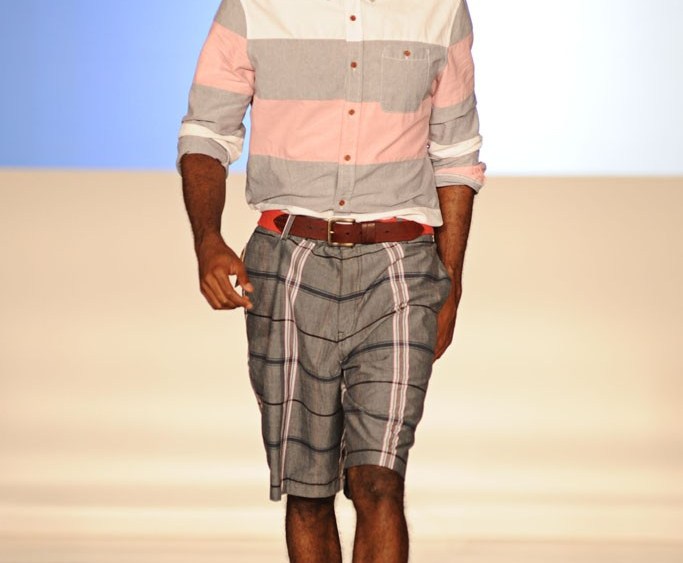 LAS VEGAS — An explosion of color along with activewear influences in all categories of business are driving solid back-to-school and early fall sales.

The early read for fall is encouraging as stores report solid consumer reaction to the pops of color, new silhouettes and updated fabrications on their selling floors. As a result, most merchants are upbeat as they look ahead to holiday and put together their buying plans for spring.

The National Retail Federation predicted that b-t-s sales would hit $83.8 billion this year, or $688.62 per household, an increase of more than 13 percent from last year. Retail sales for July were also encouraging, with many stores posting better-than-expected gains in the month.

With that as the backdrop, retailers were in Las Vegas this week shopping MAGIC, Project and the other trade shows around town. The shows run through Thursday.

Tim Bess, men’s fashion and trend analyst for The Doneger Group, singled out six “big messages” for retailers to jump on for spring. These include dress-up, in both tailored and sportswear looks; color in apparel and accessories; athleisure, or active-inspired sportswear, in technical fabrics; mixed media; updated textiles such as linen blends or spring suede, and prints-patterns.

“We’ve had a great start to fall and back-to-school, led by varsity,” said Durand Guion, vice president and men’s fashion director for Macy’s Inc. “We predicted it would be good and it is definitely driving early business.” In addition, he said denim “continues to be on fire,” led by “more fits and rinses.” He expects colored denim to find favor with customers in the third quarter.

“We’re also finding that second-quarter items are still driving business going into the third quarter,” Guion said. “Tank tops started selling in February and we’re still selling them. They don’t have an Aug. 15 stop date. So it makes us rethink our assortments and the way we deliver for third quarter.”

He said that in many product categories, color continues to be “explosive” and is encouraging the male shopper to buy. In addition, performance fabrics that emerged in sports-specific product such as tennis or golfwear have now become a “bridge to everyday lifestyle.” He pointed to the wicking properties and comfort of performance fabrics and said they also take color well, leading to increased interest.

In tailored clothing and dress furnishings, Macy’s continues to do well with new fits in suits, shirts and neckwear. Accessories, such as tie bars and slim ties, are no longer “scary,” and guys are embracing the updates. Footwear is also doing well as men learn that shoes can “make or break an outfit.”

For spring, Guion said the Macy’s team was “looking for things we can test now. We’re using this show to see what we can learn between now and holiday and use as a blueprint for next year.”

Doug Ewert, chief executive officer of The Men’s Wearhouse Inc., said the company is having success attracting a younger customer, which is leading to increased business in sportswear, denim and slimmer silhouettes in suits and furnishings.

Scott Norris, general merchandise manager, added: “Our sportswear business has been very strong. The whole slim thing is working for us and we’re seeing increased penetration there. And big and tall is also still a large part of our business.”

The new Vera Wang tuxedos that were delivered in April have been a “home run,” Norris said, and at a luxury price point. Slim fits are also popular in this line.

Looking ahead to holiday, Ewert said he expects the highly promotional atmosphere to continue to accelerate. “The customer is really responding to discounts,” he said. “And the aggressiveness seems to go up every year.”

At the shows, retailers were shopping for in-season goods in popular items such as shorts as well as spring goods in all categories.

Conrad Szymanski, president of Bealls Outlets in Sarasota, Fla., said the majority of b-t-s shopping has been completed in his stores and the results have been good. “Color is driving the business and activewear is incredible throughout the store in men’s, boys, girls. We’re definitely in an activewear cycle.” He pointed to neon accents as “incredible” in most product categories including juniors, where colored and printed bottoms were leading the way. “We actually didn’t take a bullish enough position there,” he said. “They were about 25 percent of the floor and they just evaporated.”

Szymanski said as a result of the strong showing, there is “solid momentum” leading into holiday. Although the economy is still sluggish, it’s an election year and unemployment remains high, most of Bealls Outlet’s customers in small town America are willing to buy.

For spring, the company will continue to embrace color because “whenever color is good, our business is good,” he said.

In tops, collegiate-inspired looks were among the bestsellers, including striped knits and utilitarian pieces. Performance pieces, or “textiles borrowed from the gym,” are also standouts, she said.

In the dress area, the modern suit and updated sport coats are “blossoming,” along with slim dress shirts, bow ties and knit ties. And “alternatives to five pockets are spicing up the denim floor,” she said, pointing to neutrals and whites as popular.

She said as a result of coming off “two-and-a-half years of top performance,” Belk remains “very optimistic” about the future as it prepares to celebrate its 125th anniversary.

Steve Lawrence, executive vice president and chief merchandising officer for Stage Stores Inc., said that while there are still a couple of weeks of selling left, the early read on b-t-s is positive.

“We’ve had good sales momentum for the past three months and our margins are good,” he said. Like the other stores, Lawrence singled out athletic influences, driven by Nike, as well as denim, shorts, swimwear and T-shirts as among the leaders for the season. For spring, he was looking for color in bottoms for both men and women.

At Hot Mama, a 30-unit chain targeting moms based in Edina, Minn., same-store sales are up 26 percent over last year, with accessories rising 39 percent, nondenim bottoms 70 percent, dresses 53 percent, footwear 35 percent, denim 35 percent and tops 22 percent. Vice president Kristina Klockars credited some of the chain’s success to its emphasis on transition pieces such as chiffon tops that can be worn from summer to fall. “Before the recession, we used to put out huge, chunky sweaters in July, and people would buy them like crazy, and now people aren’t going to buy them until they really need them,” she said.

Klockars is confident Hot Mama’s growth trends will continue for the rest of the year. “I believe this fall will be better than last year for sure,” she said, adding August “is turning out to be a pretty decent month for us. At least in the Midwest and most of the regions where we have our stores, it was an early spring, and it sort of felt like the longest summer ever, and I think that people are excited about fall shopping.”

Other retailers, both online and brick-and-mortar, shared Klockar’s optimism. Heidi Hoelzer, vice president and general merchandise manager of women’s at the 17-unit Scoop NYC, said, “Fall is going to be amazing. I feel so good about it because it is not so different from last year, and there are a lot of things that we saw taking off last year that are continuing. Waxed denim had its debut last year, and it is going to be big. We started seeing leather leggings take off, and now everybody has some leather in their line.”

“What we are seeing is generally strong sales growth on a year-over-year basis. That is encouraging,” said Jeff Somers, general manager of eBay Fashion. “There is a little confidence building in the broader economy. It suggests that we should be in a pretty good spot as we move toward the holidays. We have been seeing a slight uptick on the average price of items purchased, which is also an indicator that people are a bit more comfortable spending a little more.”

Jennifer Amsbaugh, a buyer at Revolveclothing.com, indicated fall is shaping up to be a good season for the Cerritos, Calif.-based e-tailer. “Lots of leather pieces are starting to move as well as booties and boots. We just started seeing that pick up within the past couple of weeks. It is about on point for us,” she said. She detailed that denim persists as a strong seller led by Mother, J Brand and Current/Elliott with skinny silhouettes still the primary choice by shoppers, who are trying out jeans in metallic hues, and predicted party dresses would be a force at Revolveclothing.com for holiday.

While there’s been much speculation about whether skirts will spell the downfall of dresses, a staple of the fashion landscape in recent seasons, retailers said that does not appear to be the case. Heidi Ware, head of fashion editorial for eBay, said, “We are seeing the skirt return for fall. It by no means replaces the dress. They will not take center stage, but they will be woven into your wardrobe.” Emily Cadenhead, senior designer for Planet Blue, which has four stores in Southern California, said, “The collections are definitely very piece driven. There seems to be more skirts and dresses and layering pieces….It seems to me like dresses and skirts seem to be the thing to layer in the fall. Usually, this time of year is pretty heavily into bottoms.”

As shoppers optimize their budgets, retailers have seen pricing become bifurcated as the low and high ends prosper and items priced in the mid range suffer. Although Kristin Knauff, creative director of Lulus.com, noted finding quality pieces at $100 and under, a sweet spot for the Chico, Calif.-based e-tailer, can be difficult, she said, “Designers are seeing that is more what the consumer wants. I have noticed that even friends of mine that are higher-end designers, they are really detecting the demand for that.” On other hand, she said items priced $150 to $300 are becoming a smaller part of the mix, as shoppers who can spend that amount are saving to spend $400 or more for designers they covet. Even at Hot Mama, Klockars pointed out the upper tier is rebounding. “A lot of branded merchandise is really coming back for us. We have brought in more James Perse and that is selling really well and some higher price point sweaters,” she said.

If there are clouds on the horizon, they could come from the upcoming election and the ongoing economic crisis in Europe. Hoelzer acknowledged the problems in Europe are taking a toll on select Scoop NYC stores. “Normal customers that our staff has become very friendly with and are used to seeing every single year have shortened their trips or maybe they haven’t seen them at all this year,” she said.