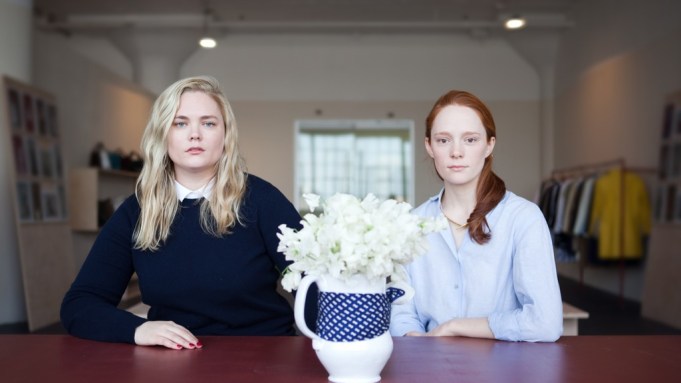 There’s been speculation that Pookie and Louisa Burch were planning their own fashion line since late 2011, when it was referenced in magazine profiles about their father, Chris Burch, and stepmother, Tory. Indeed, the younger Burches — two of Chris’ three daughters with his first wife, Susan Cole — have been hard at work on Trademark, as the line is called, for three years with its first press preview scheduled for today.

Instead of testing the hyper-competitive waters of the current retail market, the Burches are cannon-balling in with no less than four categories: clothes, shoes, handbags and jewelry, which will launch for spring in February when they open their first Trademark store — 2,600 square feet on Grand Street in New York’s SoHo neighborhood — and launch e-commerce. The capsule men’s line is slightly delayed because “we took on a little too much,” said Louisa, during a preview in a temporary showroom space in the Starrett-Lehigh Building in Manhattan, where Trademark has a very small office for its six-person staff.

The sisters have divided and conquered, assuming duties that seem to fit their personalities: Pookie, 29, the creative director, comes off free-spirited, while Louisa, 24, who handles operations, is more direct and serious. They have a lot to show for their relative inexperience, as neither has a formal design or fashion background. Pookie, whose given name is Alexandra, studied art at Maryland Institute College of Art, and Louisa went to New York University, where she created her own psychology major at Gallatin School of Individualized Study. Trademark’s debut collection is comprehensive — 105 ready-to-wear pieces, 18 jewelry styles and 14 accessories looks — designed in the vein of classic Americana.

“It’s not what we felt was missing from the market, but what we really wanted to see and wanted to wear,” said Pookie. “It’s the idea of really classic, nostalgic, identifiable items that you can relate to, but done in a fresh, new take on color.” Dark green, burgundy, navy and bright red are the brand colors, while silhouettes are derived from the traditionally preppy with an artistic bent — the work of Donald Judd and Barnett Newman was a reference point.

Fabrics and finishes are spare and modern, such as a classic raincoat in a high-shine plastic material, and a woven jacket in mint green with a curving neckline that folds back to show the dark-green satin lining. Thick sailor T-shirts come in black-and-white and red-and-white stripes. There’s a red gingham shirtdress, and a white piqué pleated A-line skirt — tennis anyone?

Shoes include four styles of flat slide sandals, all made in Portugal with Unisa, while the handbag offering ranges from flat plastic sleeves with leather handles to color-blocked top-handle totes in two sizes. There’s also hats, resin bracelets and bug-shaped earrings, and sterling silver and brass-plated necklaces, earrings and bracelets.

All of it channels a youthful, fresh-faced spirit packaged in impressively streamlined, sophisticated cuts. Sure, some could be distantly descended from the all-American side of the Tory Burch and C. Wonder aesthetics, but Trademark is distinctive.

What it shares with those businesses is raw ambition and relative affordability. “We want things to cost what they should cost,” said Pookie, referring to the price range of $25 to $500, with the majority of the collection sitting between $100 and $200. They see the customer as a younger woman, perhaps a recent college grad who “probably works in creative, not necessarily finance,” said Louisa.

About the name: Trademark. Anyone assuming it’s a sly reference to the contentious Burch vs. Burch legal battle of last year, in which one of the key issues at hand was C. Wonder’s alleged copycatting of Tory Burch products, would be wrong. “I can’t even tell you how much I did not think about that. Not even once,” said Pookie. “It’s actually quite ironic if you think about it, but the name came way before that,” continued Louisa. Rather, it was inspired by the idea of a signature look — your trademark sweater, or your trademark shoes. They toyed with calling it Uniform, but, alas, they couldn’t get the trademark.

Trademark also allows a level of anonymity. “We don’t want it to be about us,” said Louisa. “We wanted a name that was a word that you then associate with the brand, not a name.” No matter what the collection is called, it’s a family business, financed solely by Burch Creative Capital, of which their father is chief executive officer, putting them at a significant advantage. He is known for establishing businesses for the women in his life, not only Tory, but his girlfriend Monika Chiang (the company wouldn’t comment on their current relationship status), for whom he launched a namesake label in 2011. Then there’s C. Wonder, Chris Burch’s own rapidly expanding chain of accessibly priced prepster merch, which launched in 2011 with a New York store and now has 20-plus locations.

Burch has a deep history in production, merchandising and retail going back to the Seventies with his sweater business, Eagle’s Eye. He’s now a billionaire and his financial backing comes with a ready-made business template to some extent. With that, Trademark is able to avoid wholesale for its own retail and e-commerce channels. Seventy-five percent of the brand’s rtw is produced in China, with the other 25 percent in Portugal and New York.

Just as impressive as the production capabilities is Trademark’s branding. Pookie and Louisa have developed a shiny gold logo with creative agency Ohlman Consorti; the store is being designed by Bozarthfornell Architects, the Swedish firm behind Acne Studios and Sandro stores, and the Web site (trade-mark.com) is being created by Hugo & Marie.

If there’s one thing the Burch sisters’ father and stepmother know, it’s how to brand, a fact that Pookie and Louisa acknowledge, though “going into it we never thought, ‘Branding! Time to brand. We gotta brand. We have to put branding on this, branding on that,’” said Pookie.

Besides the financing, Pookie and Louisa downplayed whatever involvement or influence Chris and Tory have had. “He has a lot of experience and he has a lot to offer. But we felt from the beginning that we wanted some space there and do it on our own and be fairly independent,” said Pookie of her father. “He helps us. There’s no way we could be where we are without him.” Chris Burch declined to disclose financial data, so the size of his investment in Trademark and sales projections could not be learned.

As for Tory, “She’s not involved,” said Pookie. “She’s my stepmom and we met her when Louisa was three and I was eight. She’s obviously been a huge source of inspiration. As we get older, the age gap closes and we become more and more like best friends than like stepmom and stepdaughter. I go to her all the time with questions and I definitely have a lot to learn from her.”

Neither dad nor stepmom were available for an interview due to travel schedules and meetings but both offered quotes via e-mail. “Louisa and Pookie are in charge and can call me when they need me,” said Chris.

“It has been incredibly exciting to watch Pookie and Louisa develop their own concept and create a collection. I’m so proud of them. I’ve seen a small preview and can’t wait for the launch of Trademark,” said Tory.

Maybe the kids are on their own.