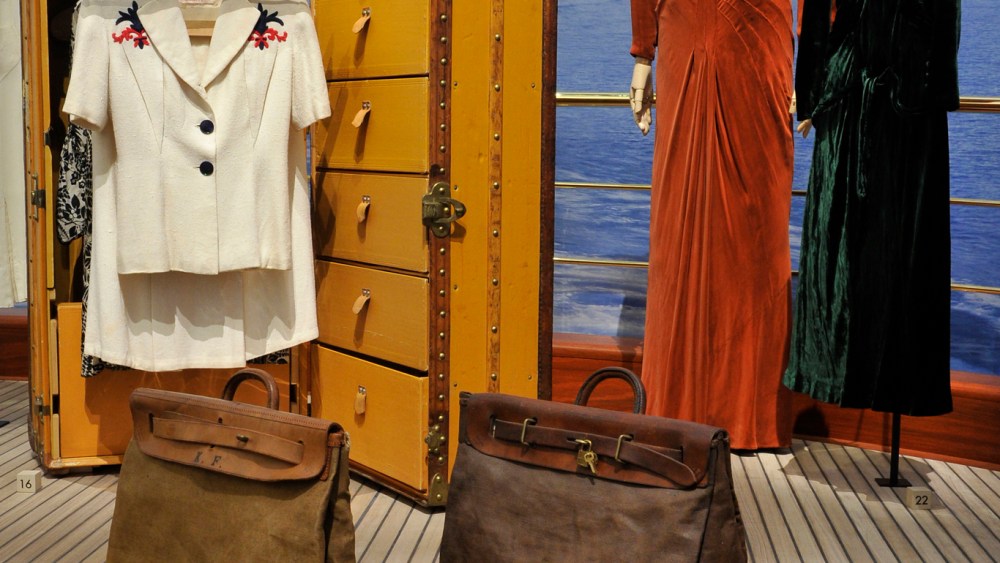 Ditto two years later when Japanese artist Takashi Murakami took Vuitton’s quiet gold and brown logo canvas and switched on the Technicolor, rendering it in 93 shades – and scattering over it a few eyeball motifs, too.

Yet those exercises were “not that transgressive at all,” Vuitton chairman and chief executive officer Michael Burke said Wednesday during a walk-through of a sprawling exhibition at the Grand Palais that decrypts more than 160 years of history of the storied trunk-maker-turned-leather-goods-powerhouse.

He explained that Sprouse and Murakami “just did what George and Gaston Vuitton did a century before — taking something and making it your own. It’s all about personalization. Every trunk had initials on it. That is the claim to fame.”

Indeed, among the first of some 1,000 objects on display in “Volez, Voguez, Voyagez – Louis Vuitton,” which opens to the public Friday and runs through Feb. 21, is a trunk from 1906 that rotates on a circular leather plinth to show off the hand-painted initials and other distinctive design details that persist to this day.

“It all starts with the trunk,” Burke declared as he led a tour of the theatrical showcase, whose Instagram-ready props include a 70-foot mast and sail that brushes the ceiling of the Salon d’honneur; a bi-plane bursting through a wall bearing a bounty of travel bags on its wings, and a vintage railway car set filled with fashions and hat boxes, with vineyards and other scenery whisking by on video monitors masking as windows.

“It’s not a fashion exhibition. It’s really the entire saga,” said Burke, explaining that curator Olivier Saillard of Paris fashion museum Palais Galliera drew countless links between the brand’s past and contemporary times, showcasing how lifestyles of the privileged have evolved over the years, propelled by advances in transportation.

Vintage photographs, clothes and accessories bring to life an array of eras in displays conceived by Robert Carson, an artistic director and set designer. For example, the automobile era is showcased in a narrow room decorated to resemble a typical French country road, flanked by rows of poplar trees, the wall cases displaying everything from driving helmets by Sonia Delaunay to a monogram car trunk from 1916 done up in vivid blue, eons ahead of Murakami’s bold brights.

Burke asserted that “each generation of Vuitton has been very of-the-moment. We’re constantly adapting, and yet we’re always firmly informed by the past. Those are not contradictions. This is what the exhibition shows.”

To wit: A metallic trunk by Vuitton’s artistic director of women’s collections, Nicolas Ghesquière, paraded on the runway less than a year ago, winks to the zinc and aluminum trunks commissioned by explorers more than a century before.

The exhibition unfurls across a series of sumptuously decorated rooms, each thematic rather than chronological. One, dedicated to wood and appointed with a Gustave Courbet painting of a tree and a jewelry case exalting shaping tools, recounts the story of the namesake founder, who journeyed from the densely wooded Jura region of France to Paris. Once in the capital, he embarked on a career as a packer, segueing into trunk making and founding his namesake house in 1854, at a time when there were some 200 such outfitters in Paris.

Saillard and co-curator Gael Mamine helped date-stamp a variety of rare trunks — propped on the actual shipping trunks built to transport these valuable artifacts — by appointing them with clothes, accessories and personal artifacts: here the top hats of a dandy from 1903; there artist Cindy Sherman’s 2014 trunk for her tools of disguise, with drawers for fake noses, wigs and assorted small body parts.

Errol Flynn’s steamer trunk, complete with his wife Lili Damita’s wardrobe for the weeklong trans-Atlantic crossing, helps mark the era of passenger liners, and the advent of steamer bags. “Now we start entering into the genesis of the handbag,” Burke said, pointing to locking closure straps from 1921, predating the famous detail used on the famous Kelly style from Hermès.

Vuitton’s first handbag collection dates from 1910, a top-handled frame style in crosshatch leather and billed in an ad as “the lightest lady’s handbags,” available in an array of sizes.

Burke noted that many accessories for men were precursors to women’s handbags, with Vuitton’s first drawstring bucket bag from 1932 designed to tote five bottles of Champagne. The small leather envelopes Ghesquière uses to dispatch his fashion show invitations were also part of a gentleman’s arsenal of travel essentials in the Thirties.

Bernard Arnault, chairman and ceo of LVMH Moët Hennessy Louis Vuitton, gave Saillard carte blanche to interpret Vuitton’s rich history. The fashion curator immersed himself in Vuitton’s vast archives in the Paris suburb of Saint-Denis, spanning some 25,000 objects and 120,000 documents, including handwritten client cards dating back to 1871. (Fire had destroyed the ones from 1854 up to that date, Burke noted.)

Thanks to the links spied by Saillard and amplified visually by Carsen, “you can see that what happened in the Twenties relates to the Eighties,” Burke said, citing but one example. “Everything relates to today and tomorrow and there’s no discrepancy between them.”

Among the highlights of the exhibition is a floor-to-ceiling showcase of trunks collected by Gaston-Louis Vuitton that spans more than 500 years of history, made of materials ranging from stingray leather to iron.

Previously an executive at Fendi and Dior, Burke was a pioneer in fanning consumer interest in craftsmanship and brand lore, convinced that these are key differentiators in a crowded and competitive sector.

“It’s something that cannot be replicated. It’s something money can’t buy,” he said. “Provenance and heritage are clearly drivers in our industry. It’s what people aspire to, and they like to educate themselves about it. More and more people want to know who made the things they buy, and how they were made.”

The executive insisted Vuitton’s exhibitions do not serve a commercial function in the way advertising does. Rather, they foster an “understanding of the house. It allows everyone to enter into the story of Vuitton, and hopefully liking it and entering into a relationship with the brand one day,” he said.

He estimates that over the last two or three years, some two million people “pushed the door” and visited Vuitton showcases, but that online exposure via social media multiplies the impact by as much as 100 times.

“People who go there become cheerleaders for what they’re seeing,” Burke said. “These exhibitions need to be Internet-ready.”

Burke said the Grand Palais show would make its debut in Tokyo in the spring, coinciding with cherry blossom season and then travel to the U.S., followed with additional cities in Europe and Asia.