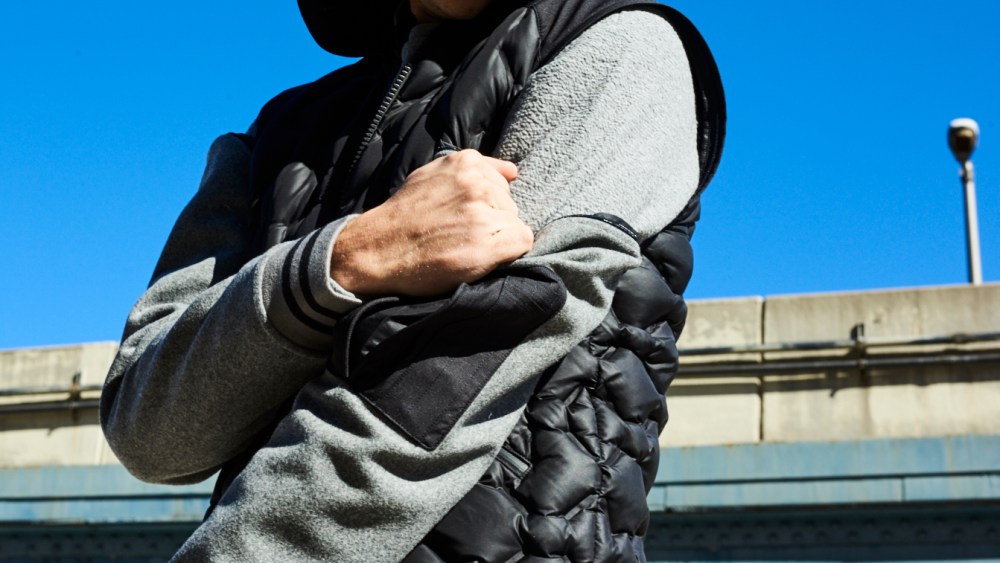 Tim Coppens has more to say.

The Belgian designer who was tapped to create the UAS brand of contemporary sportswear for Under Armour is adding some additional pieces to the fall 2016 offering. The collection will be showcased in its entirety at a two-week pop-up in Manhattan’s SoHo that opens on Dec. 2.

Called UAS Collection 01-TC Select, the capsule consists of 18 pieces in total: a mix of men’s, women’s and unisex styles. In addition to items that were shown on the runway in September during New York Fashion Week, the capsule includes four or five new pieces that define Coppens’ distinct take on modern American sportswear.

“When we were developing the line and figuring out what it would look like, there were some extra pieces,” he said. These additional looks offer “more detail and focus” and are similar to what is found in the designer’s own line, Coppens added, pointing to the parkas, sweatpants and bombers that are mainstays in his line.

The pieces center around outerwear and include technical translucent outer layers and camouflage prints as well as some base layers that speak to the beginnings of the Under Armour brand story.

But the pieces have a distinctly urban edge. Coppens was inspired by the backdrop of New York at night, as revealed in a color palette of black and heather gray with pops of orange. “When you go into the city at night and you take pictures with a camera, it’s all black, but then you see orange in the light coming out of the windows or in the taxis driving by,” he said. “So that’s why I used a muted palette with orange as the only pop of color.”

Key pieces include a transparent parka made from a water-resistant fabric with bonded and taped pockets and an adjustable waist and fishtail bottom for men that will retail for $349. A reversible, water-resistant insulated Ranger jacket with detachable collar-stow hood will sell for $360 and includes “details I would use in my collection,” he said. There are merino wool terry sweatpants for $239 and oxford shirts for $169 for men.

For women, a down quilted bomber is $449, a compression chino in a stretch fabric with compression ankle cuffs is $149, and a water-resistant raincoat shell with snaps and taped seams is also $149. The top-of-the-line piece is the men’s field house trench camo coat, which is in a water-resistant wool with ripstop overlay details on the shoulder, collar and pockets that will retail for $1,500.

Coppens said the prices for the TC Select collection are “very similar” to those of the UAS Collection but the offering is more limited. “The capsule is quite tight and there are only a limited number of pieces available,” he said.

While Barneys New York and some smaller shops including Concepts, Politics, Crème 321, A Ma Maniere, Feature and Xhibition will carry select pieces from the line, the pop-up will be the only place the entire assortment will live, he said.

Coppens designed the shop at 27 Mercer Street and its aesthetic will be similar to the raw industrial space he selected for the inaugural fashion show during NYFW. “It’s going to be partially cleaned up, but it will have an exhibition feel with cages,” he said. The shop will also offer a special look book that was shot in the city streets. “We did a newspaper look book,” he said, “so you go home with that and a direct-to-market piece.” The shop will be open through Dec. 12.

The first UAS Collection hit stores earlier this fall and Coppens said the initial reaction has been positive. “We’ve been getting excellent response so far,” he said. “And it’s interesting to see who’s buying. We are targeting the Millennial, but we’re seeing other ages buying it too.”

He said the footwear, some women’s pieces including the tailored jacket and trench and updated men’s classics including the oxford shirt are “doing extremely well.”

Although Under Armour is now a multibillion-dollar corporation, the UAS Collection launch was “like starting from scratch. Sure, I have the support of Under Armour, but it still feels like a start-up. It’s an evolution, and when people see what the product is about, it gives us ideas for what we can do next,” said Coppens.