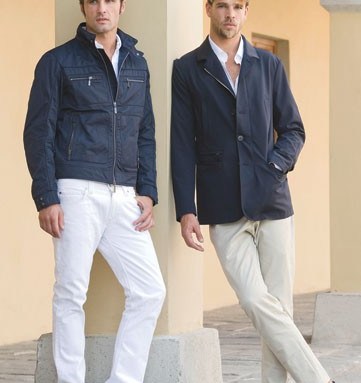 FLORENCE, Italy — Against the backdrop of a larger-than-life mosaic of President Obama under the words futuro maschile or “future men’s wear” in English, the overall message at Pitti Immagine Uomo was one of hope.

As the first luxury collections of spring 2010 were unveiled, vendors and retailers alike expressed cautious optimism the luxury men’s wear industry had bottomed out and was ready for ascent.

“We have hit the bottom, we are beginning to move in a different direction, but there is no easy way out,” said Isaia chief executive Giovanni Mannucci.

Kiton president Antonio Paone agreed: “We’ve seen results in the stores in the last three months starting to pick up.”

That said, the atmosphere at the show was far from exuberant, with buyer attendance down and modest orders written. Retailers said they had cut their budgets by as much as 20 percent and were focusing hard on quality, quantity and price.

“There’s no cause for complete optimism at this point,” said Lanita Layton, Holt Renfrew vice president and general merchandise manager for men’s. “We’re looking at each line individually….It’s a cautious budget, no doubt.”

“We’re looking for product that is unique, novel and packed with value,” said Saks Fifth Avenue vice president and men’s fashion director Eric Jennings. “And in keeping with the times, we are looking for all this at prices that are realistic and appropriate.”

That challenge was not lost on manufacturers.

“We have to focus on quality and innovation but be very careful about price,” said Sergio Corneliani, Corneliani’s creative chief. “This was the most difficult collection on which we have ever worked in over 20 years.”

Trend-wise, chic sportswear with a lived-in look, rather than stiff tailoring, was de rigueur.

“Before, it was all so buttoned up, and all about precision in tailoring. Now it’s about looseness and lightness and a relaxed attitude. There’s really strong knitwear that’s washed, with a beachy feeling. Brunello Cucinelli looks best to me, so far,” said Tommy Fazio, men’s fashion director for Neiman Marcus and Bergdorf Goodman.

After previously voicing their intention to decamp for more glamorous venues, men’s wear brands including Isaia, Kiton and Hackett opted to remain in the familiar nest of Pitti. But two of the mainstays, Pal Zileri and Aquascutum, were no-shows. In the latter’s spot was a first-timer, Brooks Brothers, which exhibited purely as a marketing exercise, and also displayed a large poster of Obama.

Some brands put a greater emphasis on stimulating orders during the show, which ran Tuesday through today, with Italy’s Slowear, for example, selling its Incotex Red line exclusively at Pitti.

Incotex Red also exemplified the biggest trend in merchandising. If frugal is the new black, vendors expect consumers to shy away from expensive things that look brand new. Therefore Slowear developed methods of washing, coloring, patching and distressing trousers to make them look aged and lived-in.

The revulsion at conspicuous consumption was smartly translated into longevity, easy care, and only the subtlest of branding. The season’s dusty palette, for example, is designed to fade gracefully.

Allegri also expects an annual increase, driven by a focus on what it does best: specialized outerwear. And Allegri president Gian Maria Argentini echoed a popular refrain: “We have no debt.” In fact, companies unburdened by bank debt said they were poised to take advantage of some prime real estate opportunities to open stores.

Corneliani said his label had managed to contain prices despite in-depth research and development of new blends and fabrics. Softly constructed sports jackets in featherlight linens, silks and cashmere blends are expected to be among the best sellers for spring.

Oxxford Clothes Inc. responded to the pressure on margins by launching its 1220 line, at around half the price of the signature collection.

“It’s for guys who want a style and a look, and aren’t obsessed with buying the finest of the fine,” said Oxxford ceo Mike Cohen. It can also offer versatility, as 1220 comes in textured fabrics that work well as separates or with jeans.

Hirofumi Kurino, senior adviser and creative adviser for United Arrows Ltd., said vendors had selected fabrics strategically, such as overprints and jersey. The result was a lower-cost product but which crucially didn’t look cheap, he said.

“This is creation’s victory over the crisis,” Kurino said.

Shirt vendors eschewed meticulous pressing and folding and treated their products casually. Lorenzini, for example, let two rows of pastel-colored, washed sport shirts and washed blazers hang from hooks. All of Gitman Bros. shirts had either been washed or were made from vintage fabrics — again, allowing the wearer to play coy about his new clothes.

Luggage and accessory brand Want Les Essentiels de la Vie came up with a way to add value without trading down. It offered one of its best-selling leather bags with a set of interchangeable colored handles, for an extra 20 percent at retail.