This brand revisited fall at The Landmark. 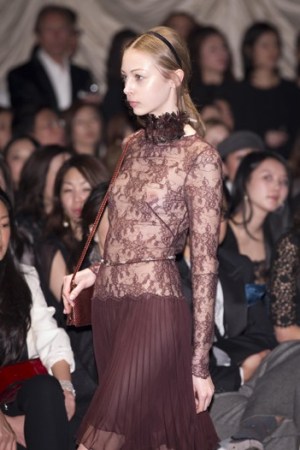 HONG KONG — Just a month after presenting its fall collection in Paris, Valentino revisited the season’s clean lines and neutral hues with a fashion show here.

On Thursday, some 500 customers and partners from the region packed into the atrium of luxury shopping destination The Landmark, just in front of the brand’s flagship. The venue was cloaked in ruched gold fabric and, just after the show, designers Pier Paolo Piccioli and Maria Grazia Chiuri retreated to the store, which became a sort of VIP area, to escape the hordes of press.

It was the Valentino design duo’s first trip to Hong Kong. “The people here are very aware of fashion and this is very exciting for designers. It’s a new luxury here,” said Piccioli, who was appointed creative director of the brand with Chiuri in 2008.

The designers said they’re particularly inspired by how regular people are wearing the brand in the city. Chiuri said she spotted Valentino shoes on one executive and Valentino ready-to-wear teamed with a denim jacket on another passer-by.

“It’s the women who are important. We love seeing the pieces being worn in a new and personal way,” she said.

Stefano Sassi, president and CEO of Valentino, said it was the right time to make a statement in this fast-growing market.

“The time is right for us to be here — Chiuri and Piccioli [have been] in charge of the house now for two and half years. We want to show their new, modern vision in Asia, because Valentino is a brand that is changing,” he said.

Valentino took its time entering the Greater China market. Over the last four years it has opened 10 stores in Mainland China and unveiled a flagship in Hong Kong, one of 8 stores in this city. Another two Valentino stores are located in Macau.

According to Sassi the new design direction is proving successful. Valentino sales in the first quarter are up at least 40 percent and wholesale sales of the fall collection improved 35 percent over last year.

Sassi said it helps that Chiuri and Piccioli began their design careers at Valentino in the accessories division. The category is crucial to developing the Asia market even further, he explained. “The Asian business is more directed toward accessories and menswear, but we are a women’s ready-to-wear business first. We pay a lot of attention to accessories, but that’s valid for every market,” said Sassi.

In terms of overall strategy, the executive said the brand is focusing on revisiting its existing shops and store concepts rather than planning a large number of new openings.

“We want to develop this new vision in every detail this year. For example, we will refurbish the Milan store and Beverly Hills will see a new store concept in 2011,” said Sassi.