Creative director Pierpaolo Piccioli said he is once again working with Zendaya, who embodies the brand's values, for the fall ads.

MILAN — Valentino is again pairing with Zendaya to embody the brand’s values in its fall ad campaign, but this time creative director Pierpaolo Piccioli is aiming to highlight the singer, actress and activist as a person and not as a model.

“This is why I chose her, for all that she represents. Throughout an aesthetic choice, it is possible to represent a whole identity. This is the power of fashion and this is the power of human beings,” he told WWD in a video interview from his home in Nettuno, outside Rome. “I think it’s fundamental to pass strong messages through the identity of a person and Zendaya perfectly represents the values that I want Valentino to stand for, such as equality and inclusivity. I chose Zendaya as a person, for what she stands for, and not as a model.”

The designer tapped David Sims, who photographed Zendaya at the Palace Theatre in Los Angeles. The campaign, called Roman Palazzo, launches today and there will also be a series of short videos showing Zendaya casually lounging on an armchair, sitting at a desk, memorizing lines from a script and captured on stage.

Piccioli said he chose Sims for personal and sentimental reasons, as he photographed the first Rockstud campaign and the first Valentino ads when the designer was named sole creative director following the exit of Maria Grazia Chiuri in 2016.

“He was there in significant moments for the brand and for myself and this is another moment of change. Together we can catch the more personal side [of Zendaya],” Piccioli observed. “These images have an intimate feel, emphasized by the fact that they are in black and white. I did not want a fashion photo but a portrait of a new generation that would represent the new Valentino values.”

Given the travel restrictions, Piccioli did not fly to Los Angeles but said he worked through the night with Zendaya and Sims from his home sharing creative ideas for the shoot. “I like her strong self-awareness, which is conveyed in the images, which are more powerful than words,” the designer mused.

Piccioli also noted that Zendaya always works with the same stylist, Law Roach. “I like this very much, it says a lot about herself. She worked with Law on this shoot, too, because I wanted her to be with the person she would feel more confident with, in the most authentic way possible.”

This is the third campaign with Zendaya, who was first tapped in December last year, and Piccioli, who has been revising the codes of the brand to render it more inclusive, believes in consistency of the images, while evolving them. “Certain things must settle, there is not always the need for novelties. We don’t always have to negate what came before. The idea is for this new aesthetic identity to be represented by these new images, which reflect the new Valentino.” 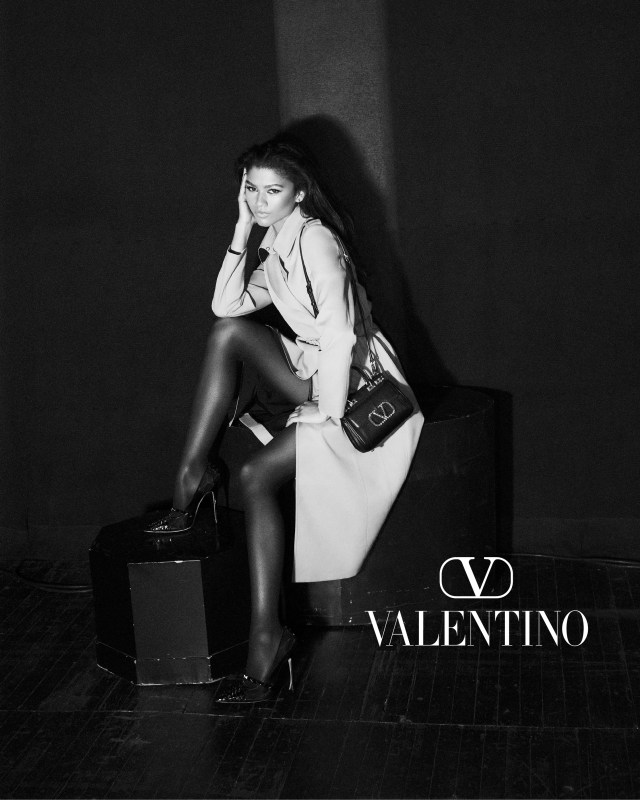 Asked if Zendaya will also front Valentino’s beauty campaign, Piccioli responded in the negative, saying that those images will respond to a different logic. “We want to overturn the beauty rules, I don’t want only one person to represent Valentino’s idea of beauty.”

Piccioli, who shot the beauty ads himself, photographed 16 different people. “The message is that there is not one single and ideal beauty concept to aspire to, anyone that sees the ads can be the 17th person, 18th or 20th person. I didn’t want to be so assertive, but rather to invite you to be as you are. We cover 95 percent of skin tones in the world, so this inclusivity is real also in the product.”

The fall images fronted by Zendaya will also emphasize the Rockstud collection, expanded with the Alcove accessories.

“Sensuality is one of the many expressions of a human being. I like to think of it as a blank space in which our physical and mental parts find a joyful, personal and unique connection,” Piccioli said. The Valentino Garavani Rockstud Alcove collection “aims to translate this concept into objects because I really think that accessories have the power to get in touch with our senses. Zendaya is once again able to interpret this vision in her very ‘Zendaya way,’ she is aware of her bodily presence and she matches it with a radical romanticism that is completely aligned with everything we are doing in our brand.”

The new Double Handle bag ranges from a medium to a micro size with the V logo fully covered in studs and a two-twist locks closure. Inside, there is a bold red napa lining and multiple hidden pockets.

The Box bag has clean geometric lines with double-faced studs running along its profile and the oversize printed Valentino Garavani logo stands out on the back. There are also bold allover studs and animalier versions.

The Alcove shoes range from pumps and flats to booties, crafted from a combination of mesh and leather and adorned by the studs in a platinum finish and lined in red leather.

The Double Handle bag will be in stores starting May 17, while the Box bag will be available in July.