"There is not a 'men’s couture' or a 'women’s couture.' It’s just couture,'" Pierpaolo Piccioli contends.

Valentino, which introduced haute couture for men in a big way with its spring 2021 collection, plans to further develop and reinforce this niche business, spying “great potential.”

The Rome-based house described an enthusiastic reception from its male clients, and cited expressions of interest from Europe, America and China.

According to a spokesman for the house, Valentino is — pandemic allowing — planning to set up “exclusive appointments with a couture team in special locations around the world.

“In past seasons, men’s couture looks have been presented in ready-to-wear shows and then sold during private appointments, in the showroom at Place Vendôme, as exclusive couture pieces,” he added.

Valentino creative director Pierpaolo Piccioli had explained during a preview last month that his spring couture skewed more toward daywear and items rather than ensembles, which prompted him to include men in the show for the first time, realizing that capes, turtlenecks and Bermuda shorts are genderless garments. Out of 73 exits, 23 were modeled by men.

“There is not a ‘men’s couture’ or a ‘women’s couture.’ It’s just couture,'” Piccioli explained over email, calling his spring effort a “contemporary wardrobe built through pieces that can be worn freely. A trenchcoat is a trenchcoat — the piece itself has its own life and aesthetics, the person who will wear it, a man or a woman, will bring this piece to life. 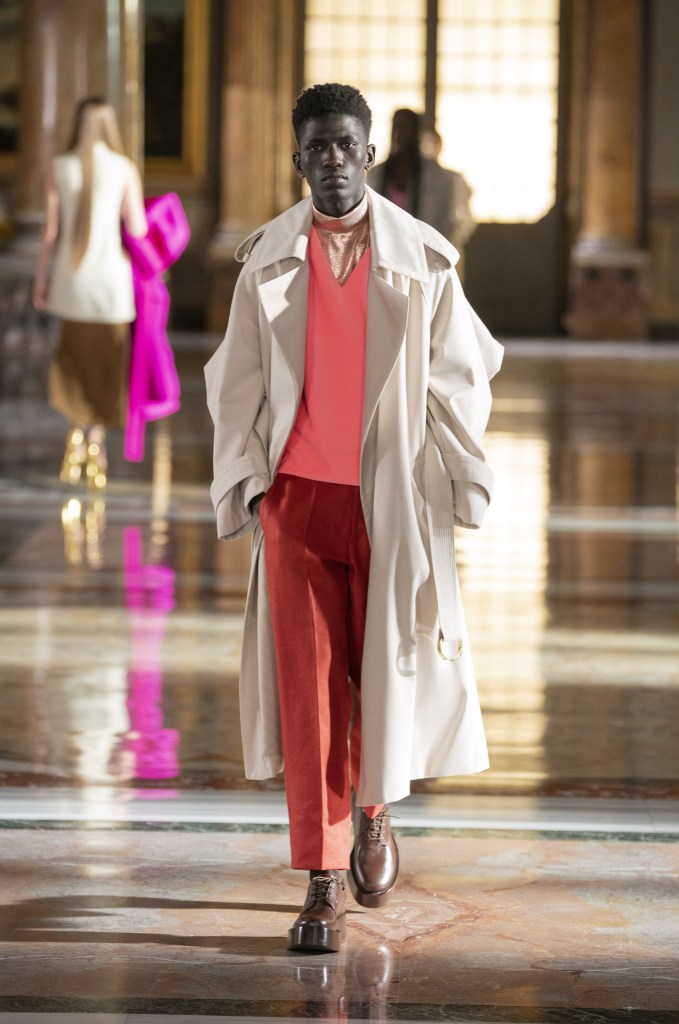 “When I observe new generations, for the most part, I see an incredible strength and assertiveness, they don’t need to specify what they are wearing, they pick up what they like, whether it’s a men’s or a women’s piece,” he explained. “When I first started to work on this ‘Code Temporal’ collection, I had clear in mind what I wanted to see. The essence of couture lays how the couture is done and most of all by who it is done.”

According to Piccioli, the “rituals and the process of the haute couture are an exaltation of the human being — they are timeless. And this non-belonging to time made me think that gender shouldn’t be a limitation, but instead an added value,” he continued. “Inclusivity and equality are not just words, but actions that must be taken. I think that to cross gender borders — it’s a natural evolution of what we do through our job.”