Marking the house's fall couture show, creative directors Maria Grazia Chiuri and Pierpaolo Piccioli are introducing an exhibition that underscores their ties with the city. 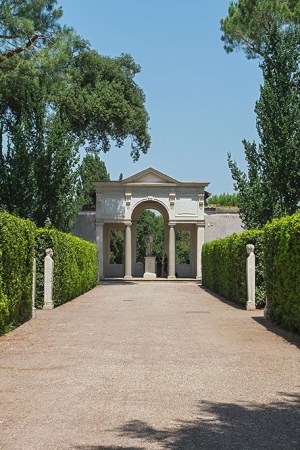 ROME — Valentino is showing a hidden side of Rome, one that is pivotal to the creation of its couture designs.

Marking the house’s fall couture show, exceptionally to be held here on Thursday evening, and the celebration of the opening of the brand’s largest flagship in the world in the Italian capital, creative directors Maria Grazia Chiuri and Pierpaolo Piccioli are introducing an exhibition that underscores their ties to the city.

“The goal is to explain that Rome is a source of inspiration that influences our work,” said Chiuri, speaking at one of the 10 locations that make up the “Mirabilia Romae Diffused Exhibition” — the sacristy of the Saint Agnes in Agone church that was completed by Francesco Borromini. Here, Valentino’s off-white “Madonne” cape from the brand’s couture spring 2013 collection is displayed on a mannequin near the bell tower overlooking Piazza Navona’s Egyptian obelisk soaring from the Fountain of the Four Rivers by Gian Lorenzo Bernini.

“We wanted to project a personal perspective and to inject some emotion, not postcard images of Rome,” explained Piccioli. “It’s our selection of places of the heart,” added Chiuri. Piccioli highlighted the importance of conveying the “spirit of a location” and its “continuity, living the past in a contemporary way. You must feel Rome, not see it.”

The multisensory exhibit features site-specific fragrances and music that are associated with each location. Art historian Filippo Cosmelli, who worked with the designers on the project for almost a year, said that “an object or a dress has more value if you understand the history or the context that has generated it. The experience is a benefit that cannot be replaced. It’s unique and cannot be repeated.”

Cosmelli underscored how Rome is “literally surrounded by art and history, you walk in history and this is an enormous privilege,” adding that the exhibition allows visitors to see the city through the eyes of the designers.

Mirabilia Romae’s locations are not generally accessible and are open for only three days to the 700 guests, between clients and press, expected at the fashion show. “This is an extraordinary visual work, to associate a dress with a location is a declaration of love for Rome,” concluded Cosmelli.

The tour begins with two chambers, the Bird Room and the Aurora Room, at the 16th-century Villa Medici. The latter is believed to be where Cardinal Ferdinando de Medici secretly received his lovers, given the presence of sculptures of Venus and Cupid. The installation at the Bird Room is stunning, with frescoes depicting an arbor brimming with birds and animals and three intricately embroidered Valentino couture gowns reflecting this natural scenario, embellished with flowers, leaves and birds, under a leafy gazebo installed in the room to the sounds of the “Four Seasons” by Antonio Vivaldi. One gown, from spring 2013, is called “The Garden of Eden,” portraying Adam and Eve.

The second stop is at Antonio Canova’s former studio, which is now the colorful and exotic atelier of contemporary artist Luigi Ontani. Stuccoes of mythological scenes are reflected onto a mirror posed under two Valentino gowns whose capes feature a motif reminiscent of wrought iron works installed at the late Renaissance loggia at the Gallery of Palazzo Firenze.

After the church of Saint Agnes, a couture gown with slivers of silver from spring 2014 stands in a metal cage inspired by fencing masks at the Musumeci Greco Academy, an historical armory considered the “temple of fencing” in a 15th-century building. On Wednesday, visitors observed a brief fencing match between world champions of the category.

The designers selected 18 pieces from the fall 2013 collection inspired by a Cabinet de Curiosités, displaying them at the Casanatense Library inaugurated in 1701, in a room that contains 60,000 volumes.

Underscoring the unique nature of the exhibition, four gowns are installed at the Bagno [bathroom] of Diana at Palazzo Doria Pamphilij, which is a private home of the princes that have inherited the building and still live there. At the 16th-century Palazzo Pecci Blunt, Valentino’s heritage is juxtaposed with its contemporary evolution. A red 1959 couture dress by the brand’s founder Valentino Garavani, which originated a flurry of designs in the hue from the Maison, is displayed opposite photos of Chiuri and Piccioli’s red Shanghai collection. Similarly, Garavani’s white 1969 dresses are seen opposite the two designers’ collection in that color presented in New York to celebrate the recently opened flagship there.

The last two locations include the Opera theater, where Chiuri and Piccioli’s collections inspired by the theater are shown near Franco Zeffirelli’s costumes for “Don Giovanni,” for example, and Giorgio de Chirico’s house-museum near the Spanish Steps.

Curated by Francesco Bonami and published by Assouline, the “Mirabilia Romae” photography book will be available in bookstores globally starting in September.

The city will also serve as an inspiration for the couture show on Thursday. Roman artist Pietro Ruffo is creating an installation in Piazza Mignanelli, home to Valentino’s historic headquarters near the Spanish Steps, that will also increase the perception of space by multiplying the levels.