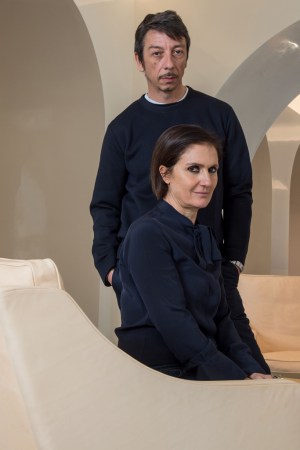 ROME — Valentino is as much part of Rome as the Spanish Steps.

It is not surprising, then, that the Italian brand’s biggest flagship globally should be on Piazza di Spagna here, one of the busiest and most famous locations in the world near those very steps, in a 16th-century palazzo and a few yards away from the company’s headquarters in Piazza Mignanelli.

“The boutique has a symbolic value, it’s in the most central square in Rome near our headquarters, and the city has always been a source of inspiration for us,” said Maria Grazia Chiuri, creative director of the brand with Pierpaolo Piccioli, in a joint interview at their office here. While the store bowed ahead of the Easter weekend, Valentino will mark its official opening with a couture show on July 9, for the occasion to be held in Rome rather than in Paris. Guests are expected to total around 700. “It’s like we are finally inviting everyone to our own home,” Chiuri said.

“This is a very important opening with a strategic relevance after our units in Hong Kong and New York, the two world capitals of consumer spending,” said chief executive officer Stefano Sassi. “Piazza di Spagna has an ulterior meaning, as it is the reference city of the brand and of Chiuri and Piccioli, and a source of inspiration for them.”

While the company previously had a small boutique on Via Condotti, the new store is seen as “a landmark, with a visibility, impact and relevance” that allows the brand to have a special standing in Rome. “It’s symbolically positive for Valentino, which takes control of its destiny, and it is above and beyond any usual store,” the ceo said.

While declining to provide an investment figure in the flagship, Sassi said the company has spent 250 million euros, or $274.6 million at current exchange rate, in its retail network from 2013 up to and including 2015. “In percentage, this is more than our competitors, but we had to catch up and recover lost ground,” said Sassi, crediting owner Mayhoola for Investments, which took control of Valentino in 2012, for developing and expanding the company. “Openings were concentrated in the last few years and we proved that we are efficacious and productive at a retail level,” Sassi said.

Spanning 15,876 square feet, the Rome flagship is an evolution of the store concept developed by Chiuri and Piccioli together with architect David Chipperfield, first unveiled in Milan’s Via Montenapoleone in 2012.

The gray Venetian terrazzo with Carrara chippings from Valentino’s original blueprint remains an essential element in Rome, too, but here the flagship hinges on a monumental entrance atrium almost 20 feet high, framed by marble columns and walls. “It’s the central nucleus, a meeting point similar to the antique Roman forum or square,” Chiuri said. “The forum is a timeless idea for Rome,” noted Piccioli. “In Tokyo it would be avant-garde, but here it’s historical. The perception of space changes depending on the city.”

While accessories, which today account for 50 percent of sales, are located on the ground floor, two marble staircases at the entrance connect to symmetric men’s and women’s areas, distinctly separated on the two sides of the store, which counts 10 windows on the street and three entrances.

On the first floor, the symmetry is also reflected by the polished and lacquered white-arched galleria. “The arches are manually painted and then carefully sanded employing an antique artisanal technique,” marveled Piccioli. The designer underscored the contrast between the gallery — only present in the Rome unit — and its modern feel, with the historical craft. Piccioli compared this contrast to Valentino’s fashion, which he and Chiuri have rejuvenated while respecting its tradition and handmade quality. “History enters our daily life,” said Piccioli, who appreciates “authenticity” and newness that adjusts to the existing background, without too strong an impact.

Work on the store began last July, and Piccioli takes pride in the fact that the unit is “not invasive; these are new spaces that look like they’ve always been here and are almost a continuation of the headquarters.”

“This is more about a special and architectural approach than an interior decoration project,” he added.

In accordance with Rome’s guidelines, the building returned to its original 16th century colors, one part in pastel azure and the other in cream.

Chiuri underscored that the intent was also to create “a store that is timeless — which is a strong value for the brand, too.”

Comfortable armchairs in untreated, natural hides pepper the boutique. “These are seats that are meant to age well. They become more beautiful in time,” Chiuri said.

The gallery and the arched windows allow natural light to flow inside, another must for the designers. “The city enters the store, there is continuity and a strong connection with the outside, which is typical of Rome,” Chiuri said.

The designer, who hails from Rome, noted a recent new traffic regulation in the square has helped the pedestrian flows, turning it into a more pleasurable shopping experience. “It’s become more of a ‘salotto’ [living room/salon] in Rome,” she said.

Timber, oak shelving and hanging elements — which are supported by polished brass fixtures around the perimeter — also mark the store, which is the first in Italy to carry the men’s Denim Made to Measure collection. The latter, with other more intimate and exclusive rooms, is carried from the main entrance. “It’s an experience of discovery, and the store is similar to a home in this way,” Piccioli said.

The company is also working on another part of the building, which will be reserved for special clients and events and which is expected to be completed by July.

Sassi did not reveal a sales forecast for the new flagship, but said “in the four days since the opening, sales were better than expected,” benefitting from “strong tourist flows” for Easter. In Europe, 70 percent of sales are derived from tourists, the ceo said, adding that “Rome will not be an exception. The location is powerful.” He added that in 2014, local spending in Europe was up 20 percent.

Dollar amounts are converted at average exchange for the period to which they refer.

Globally, retail sales climbed 45 percent last year and accounted for 60 percent of the total. Sassi underscored that retail revenues grew on a like-for-like basis, too, and touted the company’s “retail efficiency,” and a 22 percent increase in sales per square meter. Stores around the world now total 160.

An additional 20 to 30 units will open in 2015, including a store on London’s Bond Street. In the U.S., a unit in the Miami Design District opened in January; a store at the Royal Hawaiian in Waikiki will open in July, and a door at the Las Vegas Bellagio will be unveiled in December.