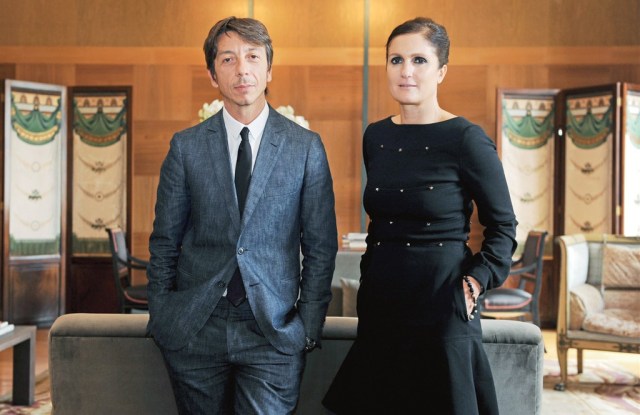 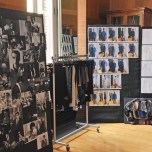 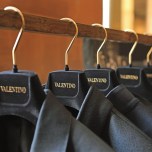 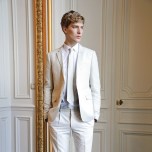 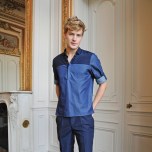 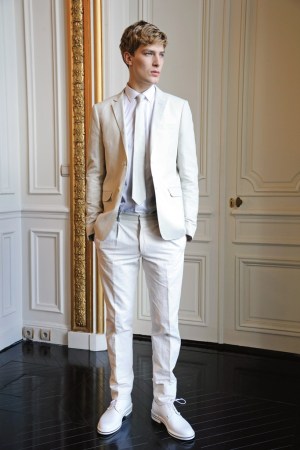 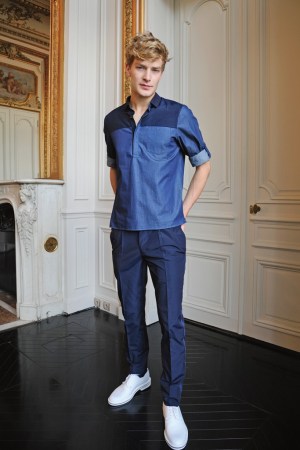 Mood boards displaying photographs of Marcello Mastroianni, Alain Delon, Jude Law and the young French actor Louis Garrel stand out against the frescoed vaults and wood-paneled walls of the Sala Giammetti in the 16th-century Palazzo Mignanelli. It is here, at Valentino’s headquarters in Rome, that Maria Grazia Chiuri and Pierpaolo Piccioli — close friends who share the title of creative director for the storied fashion brand — have set out to establish a fresh image for the Valentino man.

Piccioli, in a white shirt and slim-cut denim jeans rolled up at the ankles, nods in agreement — a gesture each designer tends to make when the other speaks. The longtime collaborators, who share Valentino Garavani’s former office, seem to work in a kind of perfect symmetry, their desks facing each other. If they ever disagree, it’s not evident today.

Yet the pressure is on. In mid-January, Chiuri and Piccioli are staging their first men’s runway show, as the guest designers at the Pitti Uomo trade show in Florence. The event, to showcase the fall-winter 2012-13 Valentino collection, will take place at another 16th-century palace, Palazzo Corsini, whose Baroque style stands out in the Renaissance capital. “The Baroque element represents a connection with Rome,” says Piccioli, noting that the show will extend throughout several of the palace’s “intimate rooms” to fulfill the “need to see the clothes up close, as in a couture show.”

Chiuri and Piccioli had been at the company for more than a decade when they stepped into their current role after Garavani retired in 2008. Since then, they have succeeded in refreshing the storied brand as they took steps to evolve the Valentino woman. In men’s, however, they have started with a clean slate.

As Piccioli tells it, the men’s image reflected the style of the legendary designer himself — “his lifestyle and the artists he surrounded himself with” — a look that reached its peak in the Eighties. Today “contemporary” and “sportswear” are watchwords for the new collection, though the designers continue to draw from Valentino’s “couture culture,” Piccioli explains.

The new image is more understated than what preceded it, according to Chiuri. “This is not a man that wants to show off, as function and fit stem from a love for sartorial and couture details,” she says. “The ideal lineup comprises restudied classics.”

Chiuri points, for example, to a double mohair and cashmere coat from the upcoming collection. “See, this cashmere is not show-off,” she says. “The blue is not shiny. It’s more subdued, almost vintage. We like elements that make pieces less transitory or of the moment, and more timeless.”

A Driver coat has been updated with a cropped, contemporary silhouette. But although the fit is slim, it is not constricting. Volumes are “more efficacious,” Chiuri says. “Our reference man is modern-classic. This
may seem like a contrast, but we ‘resee’ what was thought of as classic, with a sportswear edge.” The duo first designed men’s wear nine years ago for the Valentino Red label, which they describe as “younger, multicultural, punk, sartorial and contemporary.” But their alliance goes back much further than that. After studying at the Istituto Europeo di Design in Rome, Chiuri and Piccioli worked for 10 years at Fendi, where they expanded the brand’s collection of accessories, including the iconic baguette style of bags. Then, in 1999, Garavani tapped them to create a line of luxury accessories for Valentino. In September 2007, when the couturier announced his retirement, they were named creative directors of all the brand’s accessories, and a year later they were promoted to creative directors of the house. They showed their first couture collection in Paris in January 2009.

Even before they redefined the Valentino man, the men’s division was enjoying steady growth. Sales in the first half of 2011 rose 33 percent to represent about 6 percent of Valentino’s total revenues. The company, controlled by European private equity firm Permira, has further expansion plans that involve men’s. In September, Valentino unveiled its first stand-alone men’s boutique in Asia, in the basement of The Landmark in Hong Kong, and that’s only the beginning of an Asian rollout. For the third year in a row, men’s business in China has grown 35 to 40 percent on a like-for-like basis. Now Chiuri and Piccioli are working on a new concept store, with an eye toward revamping Valentino boutiques throughout 2012 and 2013.

Citing a revitalized product range that sparked global growth across all categories, Valentino returned to the black in the first half, posting net profits of 2.6 million euros, or $3.7 million, compared with a loss of 7.4 million euros, or $9.1 million, in the same period of 2010. (Dollar figures are converted from euros at average exchange rates for the period.)

Although men’s represents a relatively small slice of Valentino’s business, the changes surrounding it are sizable. “There’s been an enormous evolution compared to women’s wear,” Chiuri says of the brand’s men’s division.

Piccioli, looking ahead to Pitti Uomo, emphasizes that the fall-winter collection is comprehensive. With a color palette ranging from black to red to azure, pieces run the gamut from outerwear (parkas, peacoats, mackintosh coats with innovative details such as thermo-welded stitches) to accessories (travel bags, an iPad clutch, even lace-up shoes adorned with studs covered in leather). “Studs are a sign in our collections, and we very much believe in signs,” says Chiuri. “It’s a somewhat subversive element.”

“The look is…elegant but subversive and subtle, with volumes that are supercalibrated,” adds Piccioli.

Such precision is also evident in the way Chiuri and Piccioli balance Valentino’s heritage with their focus on the future — both essential components of their vision for Valentino. As Chiuri puts it, “If you don’t know where you are moving from, you stand still.”