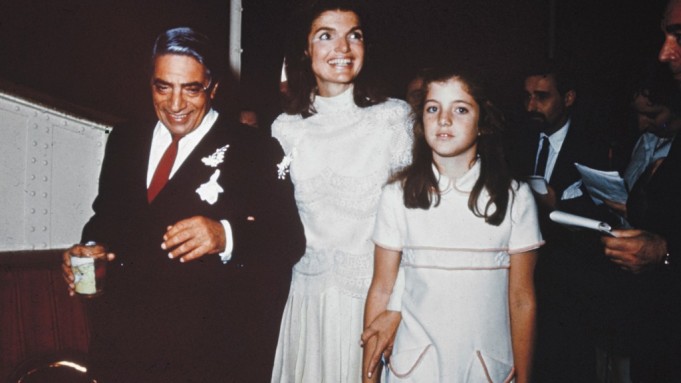 1932: Valentino Clemente Ludovico Garavani is born on May 11 in Voghera, in Northern Italy, to Mauro Garavani, director of an electrical supply business, and Teresa de Biaggi.

1959: Valentino’s first couture studio opens at 11 Via Condotti in Rome. A second follows on Via Sant’Andrea in 1965.

1960: The designer meets Giancarlo Giammetti, who would become his partner.

1962: Valentino shows at the Pitti Palace in Florence. The collection is an instant hit.

1964: The house presents the collection at the Waldorf-Astoria in New York. Jacqueline Kennedy becomes a client.

1967: Valentino is honored in Dallas with the Neiman Marcus Award for most original dress designer.

• Jacqueline Kennedy chooses a Valentino-designed dress for her marriage to Aristotle Onassis.

• Valentino shows in Tokyo for the first time.

1983: The Italian Olympic Committee selects Valentino to design uniforms for the 1984 Summer Games in Los Angeles.

• A new line, Oliver (named for the designer’s favorite pug), shows for the first time in Milan.

• Marking his 30th year in fashion, the Accademia Valentino center for the arts opens in Rome. The first show is the “Art of Cartier.”

• The city of Rome celebrates the house’s 30th anniversary with the exhibition “Valentino: Thirty Years of Magic,” held at the Capitole Museum; the Accademia Valentino presents a retrospective of his work.

1993: Valentino makes its debut in China at CHIC ’93, the country’s first government-sponsored fashion event, at Beijing’s ancient Temple of Heaven.

1994: The designer creates costumes for “The Dream of Valentino,” an opera about silent-movie star Rudolph Valentino.

1995: More than 30 years after his first show at the Pitti Palace, Valentino returns to Florence and shows at the Stazione Leopolda. The city’s mayor awards him a special prize for Art in Fashion.

• The house licenses Warnaco for lingerie.

1996: The designer receives the distinction of Cavaliere del Lavoro.

• The Council of Fashion Designers of America honors the designer with its Lifetime Achievement Award.

• The house signs a beauty license with Procter & Gamble, terminating its Unilever pact.

• The designer garners the Superstar Award from Fashion Group International.

• In July, celebrations for Valentino’s 45th anniversary include a couture show in Rome and the exhibition “Valentino in Rome: 45 Years of Style” at the Ara Pacis Museum, followed by a dinner at the Temple of Venus and an aerial ballet.

• Valentino says he will retire in January.

• In January, Valentino holds his last couture show at the Musée Rodin in Paris, and retires from fashion. The Mayor of Paris, Bertrand Delano, honors him with the Grande Médaille de Vermeil de la Ville de Paris.

• Matteo Marzotto, president and chairman of Valentino SpA, resigns and is succeeded by Stefano Sassi.

• “Valentino: Themes and Variations,” a major retrospective, opens at the Musée des Arts Décoratifs in Paris.

• “The Red Thread: The Inspiration and Passion of Valentino Garavani,” an interactive exhibition, opens in New York and London.

• “The Last Emperor,” a movie about the life and work of Valentino Garavani and Giancarlo Giammetti hits theaters worldwide.

2010: The house licenses Puig for beauty, terminating its pact with P&G.

• The Costume Council of the Museum at the Fashion Institute of Technology honors Valentino with an award for artistry.

• The revamped Via Montenapoleone store in Milan, designed by David Chipperfield, opens.

• In July, Valentino SpA is sold to Mayhoola for Investments SPC, an investment firm controlled by the royal family of Qatar, for $858 million.

• Valentino Garavani designs 30 costumes for the New York City Ballet to be worn at a special gala in September.

• In October, Valentino Garavani is honored by French Minister of Culture with the distinction of Commandeur des Arts et de Lettres.

• “Valentino: Master of Couture,” celebrating the house founder’s life and work, will run at Somerset House in London from Nov. 29 to March 3.