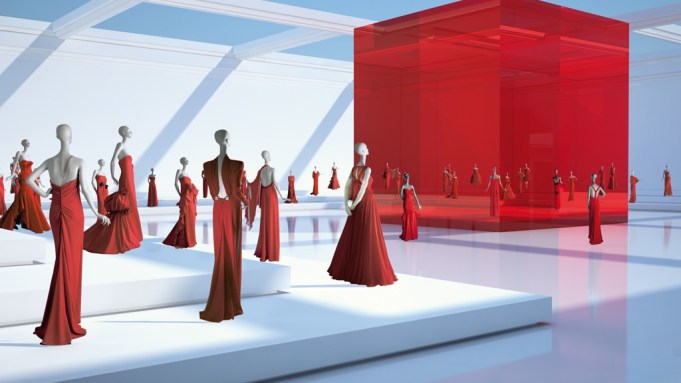 Valentino and his long-term business partner Giancarlo Giammetti have mapped out their next career — Internet pioneers.

The duo is getting ready to launch the Valentino Garavani Virtual Museum, a downloadable desktop application and the first of its kind from a designer of that caliber. Today, valentino-garavani-archives.org will go live, offering a short video teaser of the extensive, multitiered project. It will officially launch on Dec. 5 and give access to the world of the designer, who retired from his namesake fashion house in 2008.

SEE A PREVIEW OF THE VIRTUAL MUSEUM HERE >>

“I see it as part of my legacy,” Valentino said. “I am happy that thousands of students, young designers and fashion people will be able to see and study my work in every aspect of it, and in a manner easy and accessible for the younger generations. But it is also important to remember things of the past, to review the fashion that has shaped our lives. I would call it ‘Future Memory.’”

Rather than build an actual museum to house their extensive archive, the duo deliberately wanted to make this an online venture.

“It is an idea that I had many years ago, after going through a great museum site and being able to navigate through these rooms full of paintings,” Giammetti said, referring to the site for the Barnes collection in Pennsylvania as his original impetus. “But it was real. It was just a camera going around. I asked myself if it would be possible to recreate a vast computer-generated museum. We started designing and nothing really appealed to me. I wanted to have the light of Rome without looking old. I wanted to show not only the dresses but the history behind them, from the drawing to the women who wore them.”

Created by Giammetti and designed and produced by Novacom Associe-Paris with London’s Kinmonth-Monfreda Design Project, the site will focus on 50 years of Valentino’s work. It will feature three-dimensional technology that makes the experience seem almost like a real museum visit, with rooms structured to resemble a museum and its various wings and galleries that — if real — would cover more than 107,500 square feet of exhibition space.

“With Novacom’s and Kinmonth-Monfreda’s help, we were able to create an architecture that belongs to Italy, and to Rome, Valentino’s epicenter, which is described by light and shade, chiaroscuro, and at the same time is unbuildable, an architecture only possible in a computer-generated world,” Giammetti said.

“Animated galleries show a life’s work, and key dresses have been photographed in 360 degrees,” he added. “Click on them and they revolve to show every line and stitch. Click again and discover the history of the dress, who wore it where and when, see it in the amazing campaigns that we created for the collections in the late 1960s, 1970s, Eighties, Nineties…move through to other spaces leading off the sunlit courtyards under the Roman sky to new galleries full of photographs of friends, models, drawings, animations, videos.”

The virtual museum will feature more than 300 dresses. It is realized with the support of Valentino SpA, which owns the actual archive though the dresses are at the designer’s disposal. The selection on display includes many of Valentino’s most iconic fashion moments. Among them: The fall 1992 haute couture dress Julia Roberts wore to the 2001 Academy Awards; the fall 1961 couture gown Elizabeth Taylor wore to the premiere of “Spartacus”; Jacqueline Kennedy’s spring 1968 couture dress for her wedding to Aristotle Onassis, and Sophia Loren’s spring 1991 couture dress for the Oscars that year.

Each look will be elaborated upon with anecdotes and, where applicable, event photos. There will also be sketches, illustrations, ad campaigns, editorials, red carpet images and a section that focuses on special events and galas during the designer’s glittering career, including the 1968 White Collection and Natalia Vodianova’s White Fairy Tale Love Ball, which took place at the designer’s Château de Wideville last July. A media library catalogues more than 5,000 images ranging from Valentino’s original sketches to images of the actual dresses, and 95 fashion show videos.

“We have had an organized archive since the Seventies and if in some cases the images or the videos are not of a today’s quality, they [still] represent an enormous testimony of these years,” Giammetti said.

Today’s teaser features a short video of highlights and allows visitors to register ahead of the launch. The duo will also be doing outreach via Facebook, Twitter and YouTube with previews of the site starting today. This will let the public comment on the upcoming launch and share contents of the museum.

The designer and Giammetti will be New York on Dec. 5 to fully unveil the museum application online, and underscoring just how passionate the duo has become about the importance of the Internet and the power of social media, the press conference will be live-streamed on YouTube with the technical support of Google.

The celebration will not be virtual, though. Valentino and Giammetti will fete the launch with a bash at the IAC headquarters on Dec. 7.