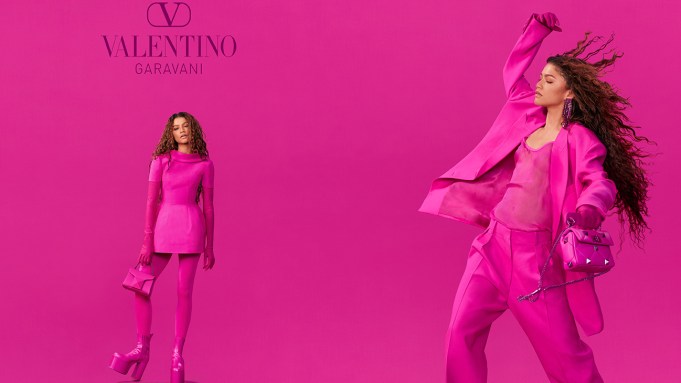 MILAN — Valentino will unveil its Pink PP advertising campaign for fall 2022 next week, fronted by two international talents and friends of the house: Zendaya and Sir Lewis Hamilton — both wearing pink and photographed posing in an all-around pink set.

“One color, bold, strong, fluid, extravagant, one color to summarize everything I like in fashion and everything that I choose to represent: the liberation from the ordinary, a space to be oneself, a loud symbol for equality and love,” said creative director Pierpaolo Piccioli.

The designer stripped the palette to a single hue, identifying it as the color of love, community, energy and freedom. “The idea of Pink as a barrier breaker was born long ago. With my work I must be able to tell and share my values through one single picture and I wanted to apply the same paradigm to one color,” Piccioli explained. “As a consequence it was almost natural to me to look (and find) something that could embrace the need for expression and representation of a new and liberated humanity. I chose Zendaya and Lewis for the PINK PP for the same reason I created this color, beautiful souls that use their voice and talent to unify, integrate, build.”

Valentino was historically associated with the color red, but for fall 2022 the house hue has been an intense, magenta Pink PP, a new Pantone color conceived by Piccioli. It has become a recognizable sign of the brand’s identity, and at Valentino’s couture show in Rome last month, guests ranging from Anne Hathaway and Ariana DeBose to Florence Pugh and Ashley Park all wore dresses in Piccioli’s magenta color.

For the brand’s fall campaign, Michael Bailey Gates photographed Zendaya in a monochromatic space, wearing pink head-to-toe, a peplum minidress accessorized with sky-high platform boots, a stud bag and gloves. A sense of movement comes from another image, where she appears in a deconstructed pantsuit — again, all in pink.

The actress, singer, dancer and activist has been fronting several Valentino campaigns, first tapped by Piccioli in December 2020, attending some of the designer’s shows and wearing the brand on the red carpet.

The women’s fall campaign will be first released on Monday in the September print issue of Harper’s Bazaar Germany.

Valentino will also release a video with Zendaya, once again by “Euphoria” cinematographer Marcell Rév, in a connection with the Valentino Rendez-Vous campaign. There will be a sofa in the middle of the studio in a dreamlike scenario, and a soundtrack by Yazoo and the “Only You.”

The campaign featuring Sir Lewis Hamilton will be released on Tuesday in the September print issue of GQ USA.

The seven-time Formula One World Champion has often been photographed in the brand’s designs, and he is now the first Valentino menswear DI.VAs for the Valentino Pink PP advertising campaign, as reported.

DI.VAs stands for different values, in sync with with Piccioli‘s endorsement of inclusivity, civil rights and support of diversity.

Hamilton has long been committed to making a difference through his position and influence, aiming for global equality, and through his charitable foundation Mission 44. The foundation strives to champion and empower young people from underrepresented groups in the U.K. through strategic partnerships, collaborations and grant-giving.

For the campaign, Hamilton, wearing a pink cape-jacket over loose pink pants and pink sneakers, was photographed by Nicolas Kern, looking down at a can of pink paint and with a paintbrush in his left hand, as if he himself were responsible for the handwritten manifesto behind him that spells out: “Still I Rise.”