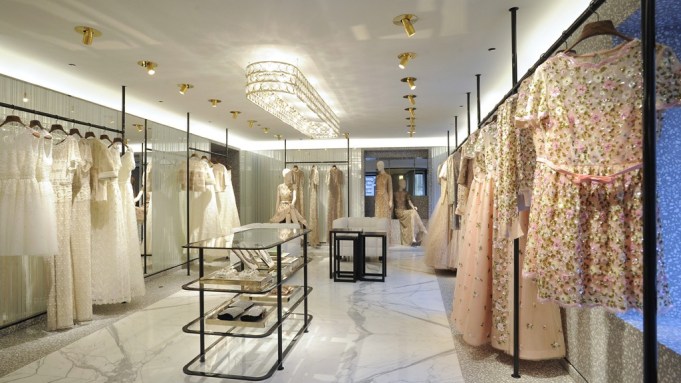 MILAN — Valentino is bringing a touch of Rome to Paris with its newly renovated flagship on Avenue Montaigne, to be unveiled Saturday. A dinner will mark the official opening on March 5, after the Valentino show.

Channeling a Roman palazzo, the unit reflects the brand’s renewed focus on its own retailing and the relevance of the city for Valentino. “Paris’ Avenue Montaigne boutique has always been the most important, with the most relevant sales and the brand shows in Paris,” said chief executive officer Stefano Sassi. “The location is fundamental; Paris was a priority after Milan, where we fine-tuned the concept.”

The boutique, under refurbishment for all of 2012, only partly shut. Asked about expectations, Sassi said that in one year, sales at the newly furbished Milan venue gained 80 percent. “This bodes well for the Paris unit,” he said.

While not providing an investment figure, Sassi said the plan is now to “identify new locations for additional important flagships” and even “doubling Valentino’s presence in key cities.”

A new store in New York will follow this year, after the company left its Madison Avenue location, and a renovation of the London Sloane Square store is in the works for 2013. The luxury firm has more financial muscle now as it is controlled by cash-rich Mayhoola for Invest­ments, an investment vehicle backed by a private investor group from Qatar.

The Milan boutique located on Via Montenapoleone was the brand’s first to reflect the design aesthetics of creative directors Maria Grazia Chiuri and Pierpaolo Piccioli and opened in February last year. The designers worked with architect David Chipperfield on the concept.

Chipperfield said “the intent was not to design for Paris but for Valentino.” Therefore the store concept is “consistent” with Milan’s, although “technical constraints and physical characteristics” demand adaptations, depending on the site. “It’s an architectural rather than a conceptual issue,” concurred Sassi.

Chiuri noted that the entrance on the corner of the building prompted Chipperfield to “build a brass cylinder, almost a totem, that marks the door. I like it, it’s important to have a concept with special elements, not only decorative but also functional, and he is an architect, so function is a priority.”

The 4,305-square-foot women’s store is a more sumptuous departure from the previous streamlined design but has a modern feel, although there are references to the Fifties and Sixties and architects such as Giò Ponti and Franco Albini, said Chiuri.

Each room comes with a different character, much like the chambers of an elegant Italian townhouse.

On the ground floor, there is a prét-à-porter lounge with black-and-white marble flooring leading to a mirrored antechamber reserved for shoes, at the other side of which American walnut library shelves display bags.

The second floor is accessible via a walnut staircase, the balustrade of which is brightened up by a string of concealed LED lights in juxtaposition to the dark wood. The antechamber here hosts Valentino’s bijou pieces, a few steps away from the “evening room,” where the house’s signature embroidered gowns stand out against the backdrop of the Eiffel Tower. The flagship is the only boutique on the venerable Avenue Montaigne with an unhindered view of Paris’ most recognizable landmark.