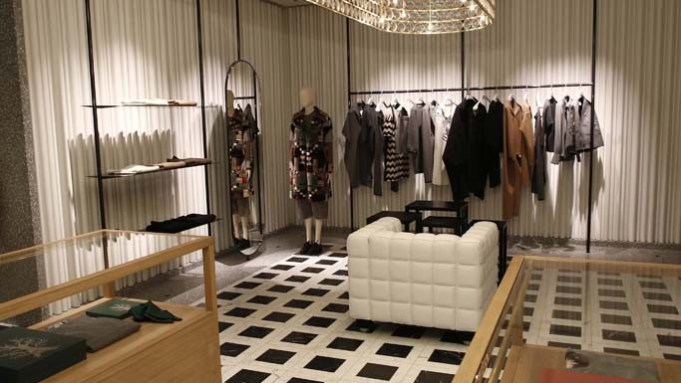 NEW YORK — To executives at Valentino, the brand’s new Fifth Avenue flagship, which opens Friday, is more than just its biggest location in the world. To them, it also signals the end of a chapter of strategic brand revitalization and growth, and the start of the next phase of global expansion.

The three-story store at 693 Fifth Avenue, in the iconic John Burgee and Philip Johnson-designed building that once housed Takashimaya, makes a definite statement for the brand’s trajectory, starting with the new facade: a sleek black steel and aluminum design that spans eight floors of the tower and nods to Mies van der Rohe’s Seagram Building.

Valentino chief executive officer Stefano Sassi said the flagship “means a lot” since it is the culmination of “so many years of activity, working with [creative directors] Maria Grazia Chiuri and Pierpaolo Piccioli to fix and modernize the perception of the brand, to grow our customer base, to revamp this unbelievable brand.”

Sassi flew in late on Wednesday to check out the space, though official celebrations with the designers are in the works for December.

“It’s a perfect retail space because there are no columns inside,” Sassi noted. “Every single floor is a box with very high ceilings, so from an architectural and retail point of view, it’s perfect. We had the full opportunity to personalize it according to the vision of our architect David Chipperfield, and not have any constraints in terms of the space.”

The lease for the space was only signed a little over a year ago, and once Chipperfield’s design was complete, construction on the store began nine months ago, two of which were used solely to demolish the elaborate Takashimaya layout.

That’s most evident with the imposing main floor with a 27-foot-high atrium and a graphic palladiana marble staircase that has a sculptural feel and connects the three stories.

“For every single store that we do, we ask David and ourselves and our creative directors to evolve and do something better in terms of providing a strong experience to our customers,” Sassi noted.

Each floor is considered a store concept unto itself, starting with accessories on the main level anchored by a wall of handbags. The flagship has the world’s largest presentation of Valentino Garavani accessories, and offers, for example, new Camubutterfly pieces and zodiac finger clutches that are exclusive to the store. “This store is the first one in which we are representing Valentino also as a real accessories brand,” Sassi said.

On the second floor, customers will find a sequence of rooms that play on the house’s palazzo concept and focus on women’s ready-to-wear, with flexible brass wall fixtures and new LED-lit oak and glass display tables.

The third floor offers a full assortment of men’s wear, from camouflage looks — i.e. sneakers, scarves, cases — that are becoming a house signature to a table devoted to custom jeans, and the runway rtw. Fifth Avenue is the second store in the U.S. to sell the category after San Francisco.

Sassi didn’t disclose the size of the investment and the projections for the Fifth Avenue unit.

He called the opening a “turning point, the end of the process that started more than six years ago, and thanks to the new shareholders who support us in this long-term view of Valentino and in the development or deployment of the potential of the brand, this is definitely a benchmark to us.”

In 2012, Mayhoola for Investments, a group controlled by the cash-rich royal family of Qatar, acquired the Valentino Fashion Group SpA.

There are 116 freestanding Valentino stores around the world, 12 of which are in the U.S. The company recently opened a unit in Aspen, Colo., and will open one in Miami’s Design District later this year. Globally, it will add two more major stores within the next six months: on Canton Road in Hong Kong and on Piazza di Spagna in Rome, within steps of the company’s headquarters.

“We are quite ambitious about developing the brand worldwide,” Sassi said. “The U.S. is one of the most, if not the most, important markets in the world. We have a long heritage here and within that, some major communication activity should always start from the U.S. and especially from New York. We are very happy to start from here and deploy our strategy worldwide.”

The U.S. accounts for about 25 percent of Valentino’s total revenue.

“Valentino today is growing across the regions,” Sassi said. “Asia is growing very fast, Japan is recovering, even Europe, which is not the best market in the world today, is growing at high double digits.

“It’s a brand that is developing very fast, a brand that is very solid in its course,” Sassi added. “We want that people recognize what we are who we are today — a major brand with a major opportunity to be successful anywhere in the world, and, in a way, New York is the center of the world.”