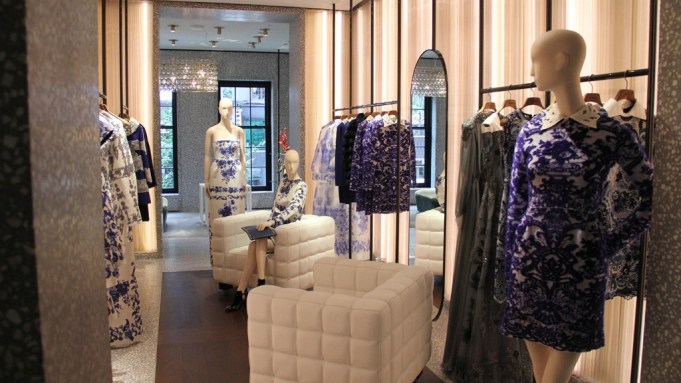 “The feeling of the store provides the customer with a very intimate, very high-end, very luxurious approach,” said Stefano Sassi, chief executive officer of Valentino Fashion Group SpA, noting that this store “is very crucial to us because it is the first one we are revamping in New York.”

A taste of the new design concept, which features custom Venetian terrazzo framing, black-and-white windowpane floors, brass fixtures, molded gypsum curtains and layered mirror walls, has already been installed in Valentino shops in Bergdorf Goodman and Saks Fifth Avenue. Each floor is dedicated to a specific collection — handbags on the first floor; daywear on the second; evening on the third, and a special VIP floor, the first in any U.S. Valentino store, on the fourth floor. The by-appointment-only VIP suite is made of up three rooms, each decorated in a different color scheme — red, green and blue. It features American walnut floors, lacquered mirror-finish paint, a faux fireplace, custom lighting fixtures by Viabizzuno and the debut of a custom furniture collection by David Chipperfield for Valentino.

The emphasis on VIPs underscores Sassi’s assertion that this store is tailored to “the most affluent customer,” who he sees as local in this case. “The store on Fifth Avenue next year will be more international,” said Sassi, referring to Valentino’s forthcoming plans to redesign its Fifth Avenue flagship as a “power statement.” “But [Madison] is much more devoted to the local customer, although Chinese or Japanese or Brazilians are coming to our store there more than ever.”

Sassi declined to give estimated sales figures but said that he expects the new Madison space to perform “absolutely better than the temporary store we have now on Fifth Avenue.”

Valentino currently has 10 U.S. boutiques, with four more slated to open this year in Las Vegas (The Shops at Crystals and Caesar’s Forum Shops), San Francisco and Aspen. There are 115 freestanding boutiques worldwide.

Sassi has over the past seven years steered the brand back into the black, forged the successful design team of Chiuri and Piccioli, streamlined the company’s structure and operations and helped restore the label’s global profile.

The executive has succeeded in the transition from Valentino’s previous owners, private equity fund Permira, to the new ones, Mayhoola for Investments, an investment vehicle backed by a private investor group from Qatar that bought the brand in July 2012. Terms of the deal were not disclosed, but Milan-based sources pegged the price tag at about 700 million euros, or $933 million at current exchange. Sassi has repeatedly praised the new owners because they have a long-term, ambitious vision for the brand.

Sassi, who was previously ceo of Marzotto SpA and started working at Valentino in 2006, said in October 2012 that he believed Valentino could double revenues in five years. Valentino’s sales in 2012 grew 22 percent to 392 million euros, or $501.7 million at average exchange, compared with 322 million euros ($414.2 million) in 2011. Sales in three years have grown about 70 percent.

The ceo has been working on bridging the gap with competitors, in terms of visibility and quality of distribution globally, through a new retail model and store concept, which supports the expansion of the accessories category. The goal now is to strengthen and intensify Valentino’s presence around the world, either directly or through franchises, increasingly taking control of the brand’s store network, and to communicate with consumers providing the full Valentino experience. Valentino has also been developing its men’s wear business with plans to open dedicated stores around the world. Sassi has been working on identifying new locations for additional flagships and even doubling Valentino’s presence in key cities.

In May, Sassi told WWD that sales at the brand’s stores had climbed 40 percent.