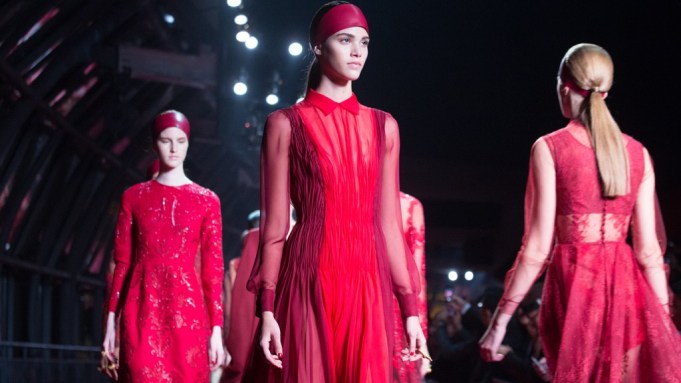 SHANGHAI — In a bid to capture a greater share of Chinese luxury consumers, Valentino, for the first time in the Italian fashion house’s history, introduced a new collection outside of Paris, on a runway set against a backdrop of futuristic skyscrapers and a river filled with barges.

The fashion event, held Thursday evening in an orb-shaped space with floor-to-ceiling glass in a cruise terminal on Shanghai’s Huangpu River, coincided with the opening of a 7,535-square-foot flagship in IAPM, a recently opened luxury mall on Huaihai Road, an upscale shopping street in the heart of the city. On Friday, the brand hosted a party at the new Lane Crawford store here where it introduced “Objects of Couture,” its book of specially commissioned photography that showcases Valentino’s legacy of accessories design. The fashion show was followed by an after party with an opera singer. Celebrity guests included Chinese actresses Zhang Ziyi and Carina Lau.

“This is quite a major event for us,” Stefano Sassi, president and chief executive officer of Valentino SpA, said. “China is becoming so important for us, and customers are evolving so quickly. I think they deserve a presentation of a collection done greenfield. Not one already presented in Paris. Done specifically to be presented here.”

The backdrop of Thursday’s event offered the ideal juxtaposition for what Valentino aimed to communicate to the Chinese — the Space-Age skyscrapers a vision of the future contrasted by old, dimly lit flat-bottomed boats that offered a tangible glimpse of a China in the past. For Valentino, the future mixes with legacy via modern reincarnations of its classic haute couture, expanding markets in Asia and an adoption of the digital technologies to remind consumers globally of its glamorous Italian heritage.

“The Chinese consumer, my feeling is that they are moving towards more selective brands and looking for something more exclusive,” the ceo said. “We can be the answer to this kind of need and market evolution, but at the same time we want to take steps in a very consistent way. We want to create a modern but timeless business. We think that it is crucial that people see this haute couture heritage and the quality and the cost behind it.”

A relative latecomer to China’s luxury market, Valentino opened its first stores here in 2007. The brand now has 18 retail locations in Greater China, and according to Sassi, more emphasis will be placed on upgrading existing retail infrastructure to cater to consumers who increasingly care about an unparalleled in-store experience as a key component of luxury shopping. Valentino will open five stores next year, the executive said.

Sassi said for 2013 sales from China and Hong Kong will make up 30 percent of Valentino’s global revenues, and that from 2012 to 2013, the luxury brand doubled its performance in terms of revenue from China. He declined to disclose sales figures from China.

Sassi said in China, as in other markets, haute couture “is a very minor percentage” of Valentino’s total business. Accessories make up 50 percent of retail sales in China and remain particularly popular among newer customers. But more consumers are purchasing ready-to-wear collections, he said.

The new collection, called Collection Shanghai 2013, showcased a multifaceted Valentino with the aim of catering to the multiple, and sometimes complex, dimensions of Chinese taste. Sassi, as well as creative directors Maria Grazia Chiuri and Pierpaolo Piccioli, said the collection was not designed for Chinese consumers but for a global clientele. They described it as a “manifesto” of fashion — a seasonless collection that mixes prêt-à-porter, accessories and haute couture.

Designs were done in red as a tribute to Valentino’s heritage yet with a multitude of shades to illustrate an evolution to the future. Red is interpreted both chromatically and metaphorically, removing it from traditionally glamorous connotations. Flowers, lace, studs and camouflage were combined in new permutations. The show featured 82 looks, of which 22 were couture.

“We have not one tone but different tones to show the different attitudes of women,” Chiuri said. “In the past, Valentino only had one vision — a glamorous brand for the red carpet. We want to show you can have red in different attitudes in your personal life but also in daytime in a simple way.”

Perhaps above all the collection stresses individuality, encouraging clients to find their own unique path to Valentino. The designers say they see their work as a connection between two cultures. “It could have been easier for us to repeat the Paris October collection, but we live in a connected world and wanted to communicate something new,” Chiuri said.

“It is a collection about identity,” Piccioli said. “We want to talk about the identity of our brand and our personal vision about our identity in our manifesto. It is also an identity for women who can be different at the same time. Every woman is not only one way. They can be romantic, the fragile, the dangerous.”

The designers said the collection is a mix of couture and rock ’n’ roll, evoking an edgy attitude that enabled them to speak about their vision of red.

“We decided to test ourselves in a show that could be a manifesto of our vision of style,” Chiuri said. “Red is like a logo in Valentino, but in our personal vision, we do not have one tone, but different tones to give different attitudes. We believe in trends and fashion, but we wanted to do something that is timeless but to show our personal side of the brand.”

“It is a red manifesto collection,” Piccioli said. “Because of course red is part of our brand, but it is also part of Chinese culture. It is the color of China in our imagination. It is like China in our dreams — not something you really know, but we were inspired by the idea we had of China.”