The designer and Giancarlo Giammetti held a press conference on Monday at the Museum of Modern Art to unveil the Valentino Garavani Virtual Museum. 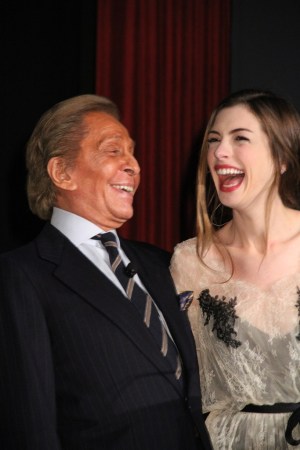 NEW YORK — Valentino didn’t wholeheartedly embrace the idea of a virtual museum when it was first presented to him. “A virtual museum was not easy to understand,” he admitted at the Museum of Modern Art during Monday’s press conference to unveil the Valentino Garavani Virtual Museum. “Then, little by little, I started to change my thinking and to get fascinated by this virtual world.”

To illustrate just how exuberant the museum turned out, the designer and his longtime business partner, Giancarlo Giammetti, presented a video journey through the online museum replete with natural Roman sunlight, video interviews and iconic images of everyone from Jacqueline Kennedy wearing Valentino when she married Aristotle Onassis to Julia Roberts accepting her Oscar wearing a vintage gown by the Rome designer. Valentino said he still enjoys designing and drawing and indicated he would add new creations onto the site in the future.

Anne Hathaway, the host Monday morning, called the site “a revolution, and I do not think that the word is hyperbolic.” Italian Vogue editor in chief Franca Sozzani also praised the designer’s pioneering move in her remarks.

Giammetti said after two years, the site remains a work in progress. “We thought the museum is done and tomorrow we can relax, but in fact it’s not true at all,” he noted. “Tomorrow, we start working on how to develop more things, and how to keep up with the new technologies.”

Whether this will pave the way for a brick-and-mortar museum remains to be seen, though the designer and Giammetti indicated that it was less likely. Giammetti more specifically denied rumors the duo chose a virtual option because they couldn’t secure the space in a museum in Rome. “It has nothing to do with this,” he said. “The Valentino company still is discussing the possibility to do a Valentino museum with the mayor of Rome but the mayor of Rome changes so many times. Every year, discussions have to start all over again. I don’t think it will ever happen, but it’s not for this that we did a virtual museum.”

Instead, Valentino said he wanted everyone around the world, and in particular students, to have access to his best designs, even if he himself isn’t the most tech-savvy designer out there. As Giammetti put it, “Somebody still has to turn the television on for him.”