The women's store at 888 Madison Avenue.

According to a company statement, “Valérie Hermann has made the decision to step down from her role. We had an open dialogue about this, and together agreed to transition the team she has successfully put in place to drive our brand strategy forward. Valérie has made a valuable impact on our business, strengthening our luxury capabilities and playing a critical role in our brand elevation strategy.”

Ralph Lauren, chairman and chief creative officer, said, “Valérie is a talented leader who has made many valuable contributions to our company. Those contributions came not only from her great experience and professionalism, but from her heart and her very special understanding of the values we have built over 50 years. I am grateful for her dedication, the very personal impact she has had and the meaningful friendship that we created and know will continue as she will always remain part of the Ralph Lauren family.”

Hermann added, “After six years, I have decided to step down from my position of president of Global Brands at Ralph Lauren. I leave with a great sense of accomplishment, having put in place a team that can continue the mission we are dedicated to. I want to thank Ralph for the trust he has placed in me — it has been an honor to work by his side and I will forever cherish the friendship we have built over the years. I also want to thank Patrice [Louvet, chief executive officer] for his leadership, partnership and support over the last two years.” 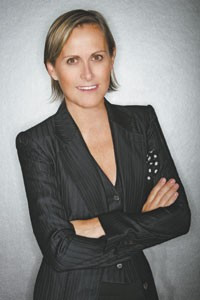 Prior to joining Ralph Lauren, Hermann was president and ceo of Reed Krakoff, having helped establish that business. Earlier, she was ceo of Yves Saint Laurent in Paris and before that was with LVMH Moët Hennessy Louis Vuitton, where she was president of John Galliano and director of women’s ready-to-wear at Dior. She had also been president and ceo of Jacques Fath. Hermann started her career at the Comité Colbert, the Paris-based luxury goods trade association.

As reported, Hermann’s amended contract with Lauren, effective April 4, 2016, runs through July 1, 2020. Hermann’s total compensation for the 2019 fiscal year was $6.6 million, according to a filing with the SEC. If her employment is terminated for any reason whatsoever, she is unable to compete for one year, according to her employment agreement.

According to an SEC filing, as of May 24, Hermann owed 52,037 shares of Ralph Lauren stock.

An SEC filing Friday noted that in connection with her separation agreement, Hermann will receive $2.9 million paid partially in the form of salary continuation over a one-year period and partially in the form of two lump sums, one to be paid in October and one to be paid on or about the last day that Hermann will receive salary continuation severance payments. Hermann will also have her expenses related to her and her family’s move to Paris paid for by the company, up to a maximum of $300,000, so long as the move is done by Jan. 19, 2020. Hermann had moved to New York from Paris to join Ralph Lauren.

She will have three months to exercise any vested stock options, unless those options expire sooner, in which case they will expire on their originally scheduled expiration date.

Her separation agreement also requires that Hermann provide the company with transition services and that she comply with confidentiality, non-competiton, non-disparagement and non-solicitation restrictive covenants.

The fashion group, which has faced some challenges over the past few years, began executing a way forward plan in June 2016 to turn around the business and return the company to high performance. The multiyear restructuring plan was first executed under former president and ceo Stefan Larsson and is now being overseen by Louvet. In the last few years the North American wholesale market has suffered, greatly impacting Lauren’s performance. The company’s plan was to speed up the supply chain, focus on the core collections of Ralph Lauren, Polo and Lauren, shutter underperforming stores and eliminate management layers.

While Ralph Lauren’s net profits and sales slipped in the fourth quarter ended March 30, Louvet told WWD in May that the company’s strategic plan, which he laid out in June 2018 and dubbed “Writing Our Next Great Chapter,” was working, and that it was a matter of making smaller adjustments and executing. In releasing the quarterly figures, Louvet said the company still needed to do more to bring in younger shoppers, drive traffic to the stores and fine-tune its approach to its seasonal fashion assortments across all labels, and particularly the Lauren women’s business.

Leading with digital across all activities and trying to attract younger customers have been key initiatives at the 52-year-old corporation. To that end, the company did a collaboration with European skate brand Palace last November, which was available at various retailers and the Polo app, which resonated with a more youthful customer.

The company’s net income for the fourth quarter slid to $31.6 million, or 39 cents a share, from $41.3 million, or 50 cents, a year earlier. Revenues for the quarter fell slightly to $1.51 billion from $1.53 billion. Growth came from abroad as revenue in North America fell 7 percent to $708 million. Europe posted a 4 percent gain to $435 million and Asia increased 6 percent to $272 million. Despite the decline, revenues for the full year rose to $6.31 billion from $6.18 billion.

In discussing the results, Louvet said the company has had problems on the product front and needed to strike a better balance between core and fashion products.

“We probably have in some instances invested too much in the fashion concept part of our business. For us, it’s really a question of balance and how do we develop it,” he said. But Louvet emphasized that the brand still believes in having a “luxury halo” and that it was more a matter of making sure that the approach is right.

He told analysts that the Lauren’s men’s business was doing well, but that women’s needed more work.

“We’re seeing softness is specifically driven by our North America wholesale business,” he said. “So as we kind of look at where the brand stands today, we actually feel good about the Lauren positioning.…And we believe that can absolutely resonate with consumers. The key causes of the Lauren challenges that we’re seeing are first on the product front — we need to focus more on the core categories that the Lauren brand is known for and that our consumers care about and expect.”

“Our assessment is probably skewed too much toward fashion in recent seasons and [we] need to rebalance that. And then on the distribution front.…Lauren is primarily in the U.S. a department store brand and so we’re focused on improving Lauren in this channel. We want to gain share,” he told analysts.