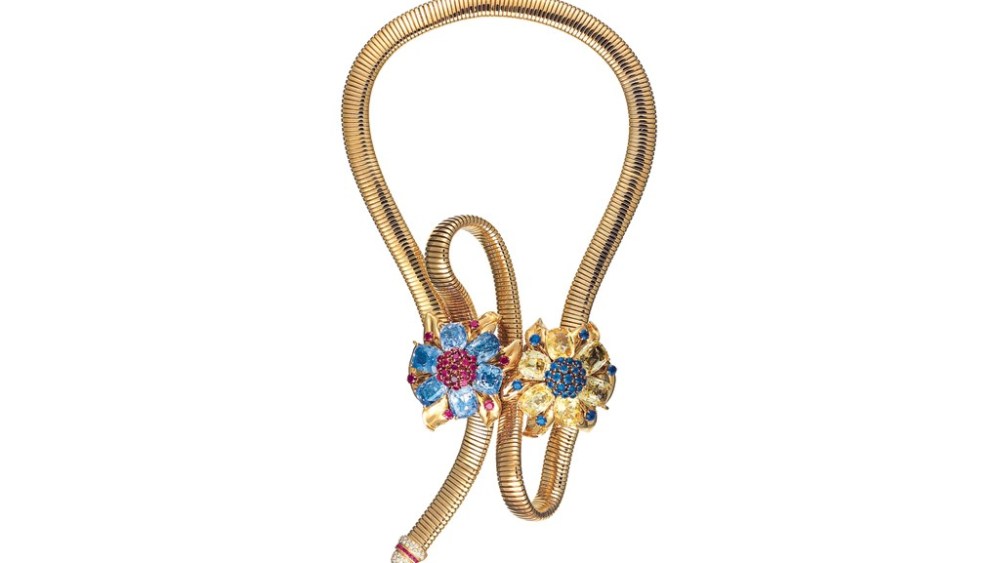 PARIS — After circling the globe with exhibitions of its exclusive creations, fine jeweler Van Cleef & Arpels has landed in its hometown with a dazzling show at the Decorative Arts Museum here.

Opening just days after the brand unveiled its Good Luck Charms collection at the Biennale des Antiquaires, “Van Cleef & Arpels — The Art of Fine Jewelry” runs until Feb. 10, and features close to 500 jewels, watches and precious objects, a third of which are previously unseen pieces belonging to private collectors.

They are displayed in chronological order in the museum’s central nave, where futuristic curved glass cases sit under petal-shaped suspensions, and in smaller side rooms, where Plexiglas tubes allow visitors a 360-degree view of selected items.

“Through a chronology of the history of the house, the aim is to illustrate and describe the whole evolution of fine jewelry and its relationship with the history of decorative arts in the 20th century,” said Bos.

“At the end of World War II, for example, you see the influence on designs of certain colors and motifs, like birds, which symbolize freedom, or more physical consequences like the return of yellow gold, because platinum was in low supply, having been used for building weapons,” he noted.

Likewise, the Twenties section includes several pieces inspired by the discovery of Tutankhamun’s tomb in 1922, including a bracelet featuring a hieroglyph design rendered in diamonds, rubies, sapphires, emeralds and onyx.

The Sixties, meanwhile, gave way to Indian influences, reflecting society’s growing fascination with Eastern philosophies, and a variety of best-selling pieces, including the Alhambra necklace, the Philippine wring and brooches shaped like animals.

There are also more unusual pieces, including some stunning examples of minaudières invented by Charles Arpels in the Twenties, and an entire sequence of jewelry from the Forties and Fifties inspired by fashion and textiles.

Aside from the famous Zip necklace, launched in 1951, these include lace-effect bow brooches, a tulle bracelet consisting of clusters of fine gold mesh flowers studded with diamonds and rubies, and necklaces resembling braided cord and twill weave.

Evelyne Possémé, chief curator of the museum’s Art Nouveau-Art Déco jewelry department, said the exhibition aims to educate visitors about the house’s trademark creations and unique skills, like the so-called “mystery setting” procedure for paving precious stones using no visible claws — featured on a chrysanthemum brooch on loan to a museum for the first time.

“There are maybe 10 people in France who know how to do this,” she said. “The metal is completely invisible and all you see are the stones. In that sense, it is really the ultimate evolution of jewelry as we have known it since the 17th century.”

The exhibition features drawings, prototypes and a screening room where visitors can take a virtual tour of the brand’s headquarters on Place Vendôme, while two to three experts are on hand full-time to provide explanations and answer questions.

Among highlights of the show are exceptional pieces once owned by celebrities such as Maria Callas and Barbara Hutton.

At an opening-night gala in September, Princess Charlene of Monaco posed alongside the Océan diamond tiara, which she wore as a necklace for her first official appearance following her wedding to Prince Albert last year. Another room features the diamond-and-pearl wedding set worn by Princess Grace of Monaco on her honeymoon with Prince Rainier in 1956.

And no jewelry exhibition these days would be complete without some pieces from Elizabeth Taylor’s collection.

On display here is the Lion Barquerolles dog collar featuring a lion’s head studded in diamonds and emeralds, given to the actress by her then husband Richard Burton to celebrate the birth of her first grandchild. This piece from 1971, which transforms into two bracelets and a clip, was purchased by Van Cleef & Arpels for its archives at the auction of Taylor’s jewels at Christie’s last year.

Van Cleef & Arpels hopes to bring to Paris some of the excitement generated by its show at the Smithsonian’s Cooper-Hewitt National Design Museum in New York last year, which drew a record 278,000 visitors.

Said Bos: “There is huge interest in fine jewelry from a public that goes far beyond the circle of our clients or potential clients and collectors.”