Vejas Kruszewski: The Youngest Competitor for the LVMH Prize

The youngest competitor for the prestigious LVMH Prize has yet to log two decades’ worth of birthday candles. 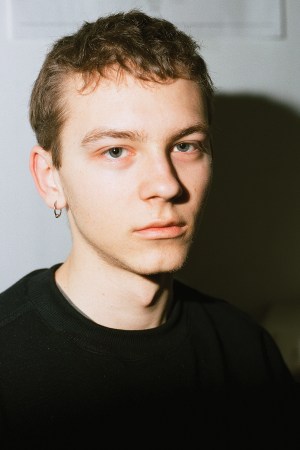 The notion of “worlds apart” hardly exists in fashion.

Consider Vejas Kruszewski, a 19-year-old upstart eking out a hand-to-mouth existence in Toronto’s garment district one minute; hobnobbing with Karl Lagerfeld at the Paris headquarters of the planet’s biggest luxury group the next.

Naturally, Kruszewski was up to speed on the fact that Lagerfeld had recently visited the Canadian city for a condo lobby project. “He was nice,” the teen demurred, confessing he was most impressed to meet “the people in charge,” including Dior chief executive officer Sidney Toledano and Chloé honcho Geoffroy de la Bourdonnaye.

The aspiring designer will face Chanel’s couturier again in June as a finalist for the 2016 LVMH Prize, which seems to have the desired effect its creator, Delphine Arnault, intended: catapulting all contenders with media exposure and networking opportunities galore.

Before being named one of 23 semifinalists, Kruszewski had four accounts worldwide, one employee he struggled to pay and radio silence from local fashion media.

Flown in by the French group to be judged by its expert panel, who whittled down the field to eight finalists, the young designer also took orders on his fall collection (his third), more than doubling the number of accounts and tripling sales. He noted he’s working from a tiny base, but the boost was enough to encourage him to introduce his first collection — some of which he’ll present to the all-star jury — and to consider a runway show next season in New York or Paris.

The prize, he said, “positions you at another level, which is quite helpful,” lauding the exposure and the “leverage that you get.

“I think we can pretty well — I don’t know if monetize is the right word — let’s say maximize what we can extract from the experience.”

Self-taught, Kruszewski started making clothing in high school, mostly for himself, copying existing garments and experimenting with ways to improve them. An offbeat resource was Japanese magazines for housewives that included detailed clothing diagrams and foldout patterns. YouTube offered handy tutorials on how to attach a waistband or construct a welt pocket.

He had real-life insights, too: One of his summer jobs was at a Montreal factory that made everything from nurses’ uniforms to the collections of local fashion star Marie Saint Pierre.

His experimental streak is plain in his women’s wear — the amorphous shapes, organic textures and snap details lending a quirky allure to bomber jackets, circle skirts and wrap dresses. He also tapped transgender sensation Hari Nef as his look book model. “Taking something familiar and making it alien,” is how he describes his clothes “for a not-too-distant future.”

But right now his main priority is learning how to “scale sourcing and sampling so we don’t lose money in the process of growing.”

The seven other finalists vying for a cash prize of 300,000 euros, or $341,000, plus a year of coaching are Tuomas Merikoski of Aalto, Glenn Martens of Y/Project, Christelle Kocher of Koché, Hiromichi Ochiai of Facetasm, Matthew Williams of Alyx, Brandon Maxwell and Grace Wales Bonner of Wales Bonner.

Almost 1,000 young designers threw their hats into the ring for a prize that already has helped boost the careers of a string of designers. They include Thomas Tait and Marta Marques and Paulo Almeida, the Portuguese duo behind the Marques’ Almeida label — the first two winners of the grand prize — along with Hood by Air’s Shayne Oliver, Simon Porte Jacquemus, and Nikita and Tina Sutradhar for Miuniku, recipients of special prizes from LVMH, parent of fashion houses including Fendi, Givenchy, Berluti, Loro Piana and Kenzo.

Unique in its online-only application process, the LVMH Prize is open to anyone under age 40 who has produced and sold at least two women’s or men’s ready-to-wear collections.

To date, LVMH has hosted 55 young designers in Paris and handed out five awards.