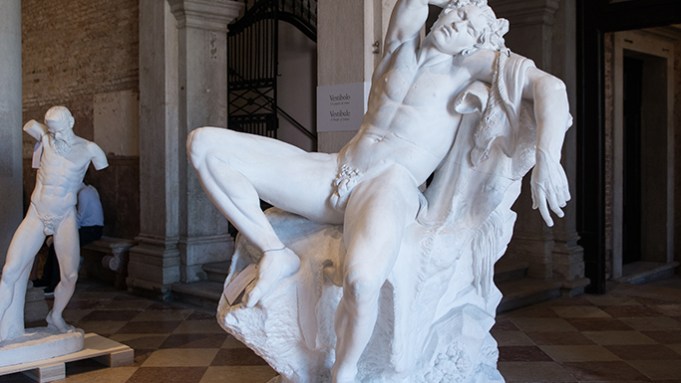 VENICE — The tight connections between art and fashion clearly emerged during a preliminary showing of the 56th edition of the Venice Biennale, which opens to the public on Saturday.

Swatch brought to Venice a series of initiatives, collected under the “Swatch Faces 2015” program involving not only emerging but also established artists.

“The world is based on the power of emotions and we believe in artists as people who are able to inspire us,” said Swatch creative director Carlo Giordanetti, introducing this year’s program, which he described as “based on disorder, time and sound.”

In particular, Swatch created a pavilion at the Arsenale area, where it will bring five sets of artists, staying for six weeks each. All the artists come from Swatch’s Shanghai Art Peace Hotel, a former hotel the company transformed into a residence hosting 18 international creative minds at a time.

Among the first to showcase their works at the Biennale, North American artist Alec Von Bargen presented “Man Forgotten,” a series of images, videos and installations analyzing the connections and the engagement between the single human and the environment.

Italian Luca Bray unveiled “Mio Tokyo,” a work inspired by his visit to Japan, which mixes paintings and collages made using Chinese newspapers.

Yan Wang Preston showcased “Mother River,” the result of her long trip following the course of the Yangtze. The artist took photos of the river at a precise interval of every 100 kilometers showcasing the tight relationship between the landscape and the Chinese national identity.

The same pavilion at the Arsenale also hosts other projects developed by artists for Swatch. These include the work of Chiara Luzzana, who registered and synthesized the sounds she recorded in the streets of Shanghai to create the soundtrack of the booth, as well as the paintings of Berlin-based artists and performers Eva & Adele, who also created a special timepiece for Swatch. This is a pink and yellow style coming in a plastic case inspired by a box, which the artists found in a flea market.

Portuguese artist Joana Vasconcelos also designed a limited-edition watch for Swatch. “This is the first handmade timepiece the company ever made,” Giordanetti said, referring to the Vasconcelos design, which combines a plastic strap with a face made using the ancient Portuguese Filigree metalworking technique.

In addition, Vasconcelos teamed up with Swatch to present the “Giardino dell’Eden” project at the Venice Biennale. Aimed at exploring the idea of “how we can produce a new world and keep it poetic,” as the designer explained, Vasconcelos recreated a suggestive labyrinth garden using colorful plastic flowers which seem to move thanks to a sophisticated, high-tech light system.

Technology is not an element included in the work of Brazilian artist Veio, whose minimal, essential yet fascinating style caught the attention of Marni creative director Consuelo Castiglioni.

For the last step of the company’s Prisma project initiated in September in Milan to celebrate the 20th anniversary of the brand, Marni installed 100 sculptures by Veio, who creates stylized animals from wood decorated with pops of color, on the courtyard and second floor of Venice’s Abbazia di San Gregorio.

“It’s so great to finish our celebrations here, in this amazing place and with an artist, who is so close to our aesthetic,” Castiglioni said during a cocktail event.

While the first level hosted the biggest pieces, a wide range of small sculptures was displayed on the second floor to create a sort of path into a wood populated with little animals.

“Veio’s style is so minimal and clean, but so magic and poetic at the same time,” said Marni director of special projects Carolina Castiglioni, adding that they also asked two Italian artists to reach Veio in Brazil and film him for six months. The result is a video screened in a room of the Abbazia di San Gregorio, which was transformed in a sort of small cinema with customized chairs printed with frames of the video.

At another historic Venetian palazzo, Ca’ Rezzonico, the Italian beauty company Davines hosted a party to show off the restoration it funded of the three wood benches from the mid-18th century and Venice’s Palazzo Contarini di San Beneto.

“Davines supports beauty and Venice is the symbol of the universal beauty in danger,” said Davines president Davide Bollati, referring to the fact that many Venetian buildings and historic trademarks need to be restored. Case in point, Diesel chief Renzo Rosso is financing the restoration works of one of the city’s most iconic gems, the Rialto Bridge.

“The benches, which are very rare examples of the period, were in awful conditions abandoned on the ground floor of the palazzo and exposed to the effects of water and sun,” said Toto Bergamo Rossi, director of Venetian Heritage. “We hope that this initiative will push Venice’s municipality to start the restoration of the whole palazzo that housed the benches.”

At Ca’ Corner della Regina, Prada offered a press preview of “Portable Classic,” an exhibition open to the public from Saturday to Sept. 13. Curated by Salvatore Settis, who also organized the complementary exhibit at Milan’s Fondazione Prada, the exhibition explores the theme of the reproduction of classic sculptures in smaller scale. Through about 80 pieces, it also shows how Renaissance artists used small copies to determine the original status of classical sculptures.

Michele Lamy, the life and business partner of Rick Owens, chose the Isola Certosa to dock the barge she created for the Biennale.

“This project originally started in London during the Frieze Art Fair and then we decided to participate to the Biennale in our own way,” said Lamy, who is in Venice quite often with her husband to manage the production of their fashion collections. “Rick has a studio here at the Lido and I tried so hard over the years to buy an island, or something, and it always turned into a mess. But now we have the barge.”

Made from scaffolding and assembled at Porto Marghera, close to Venice, the barge welcomed the couple’s friends from Tuesday to Friday and it featured a restaurant handled by a Congolese chief, who mixed African food with nouvelle cuisine; installations by a range of artists, including Lamy’s daughter Scarlett Rouge, as well as a recording studio, which also hosted A$AP Rocky. Lamy will actually appear in a film with the hip-hop star to debut in conjunction with the launch of his new album in June.

“We want to help people to smile and to feel good. This project is about life, it’s about being gypsy, we see the world this way, we want to engage with people,” said Lamy enthusiastically, who also revealed that the barge will be reassembled in Hong Kong during the local edition of Art Basel.