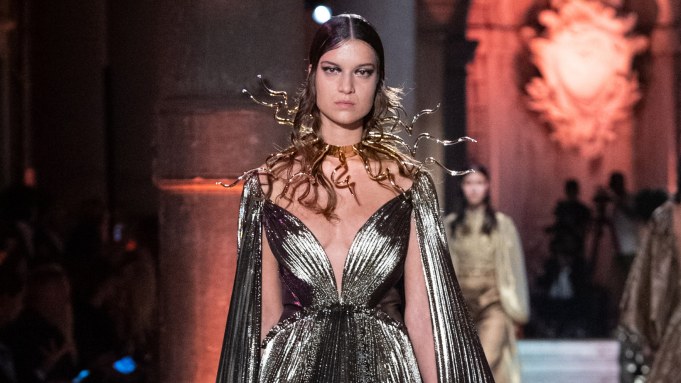 VENICE — Alberta Ferretti admitted to being a bit tired of a way of doing business that puts so much emphasis on the industrialization of fashion.

“I feel now it’s time to focus on creating pieces with a strong identity, that certainly respond to the current needs, but that at the same time can be relevant in a woman’s wardrobe for a long time,” she said during an interview in the refined suite of a luxury hotel in Venice overlooking the Grand Canal.

The designer was in town for a special event she held Saturday night in collaboration with the Venice municipality as part of the celebrations of the 1,600th anniversary of the city’s foundation.

“When the City of Venice and the Musei Civici Foundation reached out to me for this project, I felt incredibly honored and happy, since Venice is the most beautiful city that I have ever seen in my life,” Ferretti said. “When you spend some time here, you really feel like your mind starts getting more imaginative and imagination is the most important ingredient of creativity.”

Breaking free from merchandising strategies and commercial needs, with this event — held in conjunction with the Venice Film Festival —  the designer managed to find the ideal platform on which to stage her signature vision of femininity and elegance, this time, in keeping with the show’s setting, tinged with a touch of eccentricity.

Held at Venice’s prestigious Cà Rezzonico, a sumptuous palazzo that houses a museum dedicated to the city’s 18th-century history and art, the event included a cocktail held in the garden, which was followed by a show of 26 one-of-a-kind outfits.

In 2017, Ferretti dedicated a collection to Venice and employed some of the city’s most iconic symbols, including the winged Lion of Saint Mark, the black-and-white stripes traditionally printed on gondoliers’ T-shirts, and postcard renderings of the city. But this time she approached the Venetian inspiration more subtly.

“I didn’t want to create costumes, but beautiful, precious clothes that women can actually wear, of course not everyday, but for special occasions,” said Ferretti, highlighting that even if elements of Venice’s heritage were included in the collection — for example, she collaborated with legendary Venetian textile maker Rubelli for damask fabrics, and used Fortuny-inspired textiles — she wanted to offer a modern view of the city’s spirit.

For example, while the designer avoided the exaggerated, roomy silhouettes of Venice’s famed ballgowns, she maintained the signature elongated, flattering shapes of the evening dresses that helped her build her reputation.

Spotlighting artisanal craftsmanship was one of the designer’s main preoccupations. “I think that now, more than ever, it’s crucial to celebrate Italian craftsmanship; it’s one of our biggest and most precious treasures,” said Ferretti, who enriched her creations via a range of different techniques.

For example, in order to recreate the magic light effect of the water of the lagoon hit by moonlight, she draped a plissé Fortuny-inspired fabric, creating a suggestive wavy movement on a flowy gown. She also combined velvet and organza on a dress with a plunging V neck, while lace was matched with plissé tulle on a metallic maxi frock featuring a feminine crisscross detail on the back. Fringes added charming movement to several pieces and feathers contributed to the dramatic elegance a gown enriched with a cascade of ruffles. Draped capes crafted from opulent fabrics were layered on separates shining with crystals or laminated surfaces.

“I also wanted to introduce in the collection a touch of futurism with the glass jewelry pieces that I created in Murano with an incredible artist, Massimiliano Schiavon,” said Ferretti, referring to a range of gorgets, necklaces and bracelets in blown glass. Featuring organic shapes, they complemented the wet hairstyles that made the models look like enchanted creatures emerging from the Venetian lagoon.

With this powerful show, the designer managed to offer a grand tribute to the city, but with her signature aesthetic. Even if over the years she has amped up her offering to deliver a wide range of products, the collection demonstrated Ferretti’s skill as an eveningwear designer able to translate her idea of feminine beauty into dreamy creations.

All About Mothers: Chanel Hosts a Dinner at Venice Film&nbsp;Festival