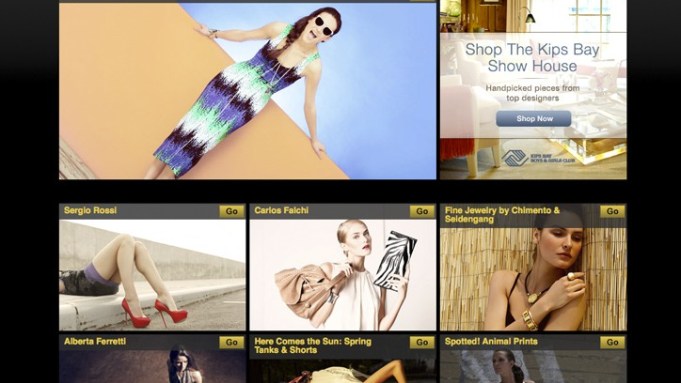 The competitive landscape for the flash sale concept is getting more crowded every day.

Paris-based Vente-Privée.com, the largest flash sale company in the world, is expected on Thursday to unveil a partnership with a U.S.-based firm, likely serving as its entrée into the American market. Officials at Vente- Privée declined to provide details, but Jacques-Antoine Granjon, the site’s chief executive officer and co-founder, will be in New York Thursday for the unveiling of its U.S. partner, according to U.S. and overseas sources. Summit Partners, which has offices in Boston, Palo Alto, Calif., and London, has held a 20 percent stake in Vente-Privée since 2007.

Market sources have indicated that Vente-Privée’s U.S. partner could be American Express. Officials at American Express could not be reached for comment by press time. But the financial and credit card giant is scheduled to make an announcement on Thursday afternoon that it said is expected to “impact the fashion industry.”

Several speakers are set to partake in the American Express announcement, which is expected at around 1:30 p.m. at Eleven Madison Park Restaurant in Manhattan, but the name of only one has been released. That individual is Dan Schulman, president of Enterprise Growth Group at American Express. His responsibilities include strategies to expand alternative mobile and online payment services, and form new partnerships geared toward expanding and building new revenue streams for the financial firm.

The flash sale sites are so popular among consumers that $34 billion online giant Amazon.com last week launched its members-only Web site Myhabit.com. In February, Nordstrom bought HauteLook for $270 million. And venture capitalists are still making investments in the sector. Gilt Groupe on Monday said it raised $138 million in new funding, raising its valuation to $1 billion. Last month, ideeli Inc. said it completed its Series C financing round of $40 million, led by Next World Capital.

Kevin Ryan, Gilt’s founder and ceo, said Monday he expects more consolidation in the space in the next 12 months. Gilt is expanding rapidly, with plans to launch full-priced men’s and food sites this year.

As for the growing competition, Ryan doesn’t seem worried: “The large companies like ourselves have a lot of revenues and a lot of traffic, and it’s going to be hard for the smaller companies to compete.”

Meanwhile, Adam Bernhard, ceo of HauteLook, also is just fine with the competition.

“I think the competition is great. It continues to show that the consumer has chosen to shop this way. Retailers are looking at this as a space that’s here to stay, and the brand community sees this as a legitimate brand distribution channel that it has to pay attention to on a regular basis,” he said.

Bernhard said the top three online sites, which include HauteLook, do in excess of $1 billion in annual sales. He sees mobile innovation as the next driver for the space. The firm is launching its iPad app in the next 90 days so it can “go wherever the consumer is.”

Bernhard also disclosed that his firm is in regular discussions with credit card companies, which he said are starting to recognize the “power of the space.” He declined to elaborate on whether some arrangement with credit card firms might be in the works. Flash sale sites, interchangeable with the term private sales, meet the thrill-of-the-hunt need of consumers shopping online, where members-only shoppers have a limited time to make that deal. Some sites buy inventory, while others do not hold any inventory. Both business models do include curation to better target a particular customer. As consumer buying habits shift online, a variation of the concept is the daily deal site, such as Groupon and LivingSocial, which focus on local service deals.

Apar Kothari, founder and ceo of MyNines Inc., a sample sale-flash site aggregator, said, “There are three types of flash sale shopper: They are either looking for the best deal-value, a specific item or an opportunistic buyer looking for newly listed items.”

According to Tom Bernthal, ceo of Kelton Research, “Flash sales are not a passing fad. It’s here to stay. Consumers have voted with their dollars. They like this way of shopping and [the concept] is working.”

Bernthal pointed to Amazon and Zappos as disruptive innovators that have transformed shopping online. He also believes consumers have adopted the flash sale concept due to the idea of gamification.

“We’ve been watching for several years how companies are taking consumer behavior and adding elements of game play to make it more fun, enjoyable, sticky and a better shopping experience,” Bernthal said.

He noted that flash sales are the “ultimate example of gamification,” since they pull in consumers and change the way they shop.

Still, there’s debate on how the sites will evolve, mostly in reaction to inventory issues.

Stephen Wyss, partner in the retail and consumer product practice at BDO USA, said, “Flash sales provide a tremendous opportunity as a distribution channel, and the competition is starting to get hot. It started with a few players and now even eBay is considering development of its own flash model site.”

Ironically, eBay’s $2.4 billion deal for fulfillment service provider GSI Commerce in March did not include Rue La La, one of the top three flash sale sites in the U.S. Instead, Rue La La will be part of a holding company under the leadership of GSI founder and ceo Michael Rubin in which eBay will hold a 30 percent minority interest.

Wyss said, “At some point, as the potential for access to excess inventory diminishes, flash sales could evolve to full-price or near full-price flash sales, moving the concept to a full-price model.…In addition, they can create items just for the site, or test product on the site.”