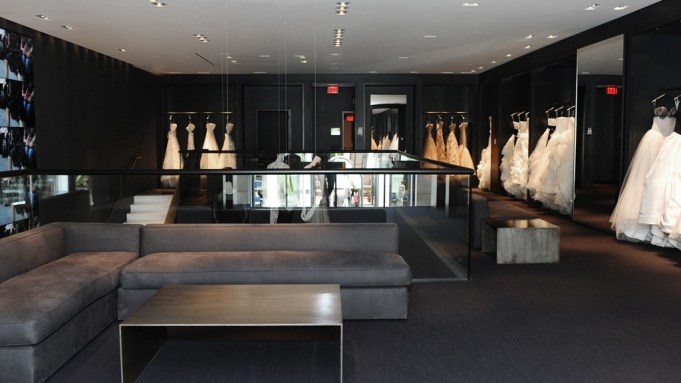 The designer had taken a 72-hour cross-country break from designing her next wedding-gown collection to fly to Los Angeles to give her new Beverly Hills bridal store the once-over before it officially opens Saturday. Aside from rallying 20 contractors to ensure her check list is completed, Wang examined artist Marco Brambilla’s in-store installation and still needed to decide on neon lighting for the windowless store’s entrance.

Once in New York again, it would be back to bridal to ensure the collection was finished in time for Monday’s shoot with director Gordon von Steiner. For the first time in 24 years, Wang is going digital, filming a visual presentation instead of having a bridal runway show. If all goes well with her first cinematic-inspired effort with von Steiner, whose portfolio includes work for Chanel Rouge, Lanvin and Steven Meisel, the designer doesn’t envision herself doing bridal shows in the future, at least not in the traditional way.

“When I started shooting the ads and going to shoots like I used to, the ad campaigns not only reflect what I authentically feel and is me — although I am not a 26-year-old bride. It is who I am as the designer and perhaps the creative director and the artist in me,” she said. “We had billboards in L.A. announcing our store opening. I’m trying really hard to unify all these components and the re-branding, which I feel is crucial.”

Von Steiner’s video will make its debut April 13 on the designer’s Web site and it will be shown globally in her 17 freestanding bridal stores, including the Beverly Hills one. Rather than rely strictly on bridal’s shrinking base of editors and boutiques, Wang wanted to widen her reach. The April and October biannual bridal markets — “after all the shows are over” — can be tricky for lining up models, Wang said. In addition, her Madison Square Park showroom in New York, where she has shown in recent years, can only accommodate so many. (Early on in her bridal business, she staged shows for 500 or 600 in The Pierre hotel’s Grand Ballroom.)

In addition to reaching more people, the video will allow viewers to see the mixture of fabrics and painstaking details up close with the added perks of sound, music and movements beyond the runway. “We’re coming up on the 25th anniversary next year and I felt it was really time to step up the bridal branch of this business,” she said. “I’ve dressed thousands of brides. People often refer to me as a bridal designer. Perhaps in numbers that might be true, but certainly not in effort because we have always devoted an enormous amount of energy to ready-to-wear. Not only the clothing, but the staging, the shows, the stylist, hair and makeup.”

Sawyer Berson handled the charcoal gray monolithic design for the new Beverly Hills store, which is one of the U.S. stores owned by the company. The designer’s five-year-old store on Melrose Avenue closed last week. While the airy private second-floor of the 5,500-square-foot store at 428 North Rodeo Drive is dedicated to her signature bridal collection, there will be a greater emphasis on eyewear, including new higher-end styles, jewelry and shoes. The company took over the space after Labor Day last year. “It was the Hermès so-called pop-up store but an Hermès pop-up store is better than most people’s flagship in all fairness…” Wang said. “What I was most attracted to is that there are no windows, which for a retailer is a very ballsy thing to do — especially on Rodeo. I wanted a sense of mystery that encouraged people to come in and explore.”

The fact that Los Angeles attracts a steady stream of tourists and international destination shoppers was a selling point. Her new address will also serve as gateway to Asia for the brand, which plans to open a Singapore bridal store later this year or in early 2015. With another set to open in Istanbul this spring, Wang said she also has her eye on Boston and Miami for additional locations.

Los Angeles has been linked to the company’s success as a result of more than two decades of red-carpet dressing. With a 40-person atelier in New York, Wang made a point of staffing a smaller one in Los Angeles. “We can provide clothes for movie stars, celebrities and socialites for their special occasions that are beautifully made, I’m proud to say. And that’s taken me 25 years to get my rooms there. That’s not very common in the U.S. anymore, not at all. That’s how I give back and invest back in my company.”