“It all starts from that collection, inspired by an imaginative trip through California, the Pacific Ocean, Hawaii and Japan — sort of a Neverland,” mused Etro, creative director of the women’s collections at the family-owned company. “I needed that sense of oxygenation, of escapism, running away from the city,” she told WWD in an exclusive interview.

For the first time, Etro worked with American photographer, artist and director Cass Bird, and the campaign was photographed last December in San José Del Cabo, Mexico. “I went there a few years ago on vacation, and I was impressed by its wild and untouched nature and the sea, so different from what we are used to in the Mediterranean,” said Etro, noting that it’s easy to find horses or donkeys roaming freely there.

To wit, in one of the images, Edie Campbell and Olivia Vinten pose together barefoot and straddling a light chestnut horse with a flaxen mane and tail.

The Pacific Ocean is one of the protagonists of the images, together with a rocky background contrasting with the golden sandy beaches. The bohemian, carefree attitude of the models is in sync with the props — an Etro surfboard or a colorful van that could double for a Volkswagen Samba minibus.

The campaign is also fronted by Niko Traubman and Erik van Gils as Etro explained that, while the men’s collection is designed by her brother Kean, the two divisions are linked and connected in “a single world.” 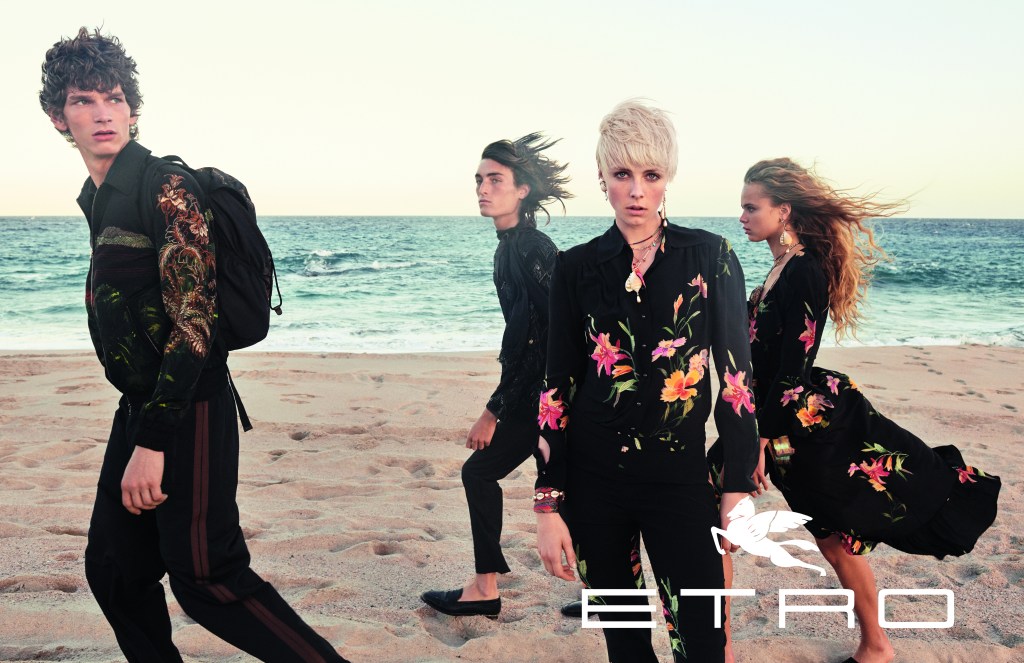 The campaign also marks the return of the storied symbol of the house, the winged Pegasus horse, above the Etro logo. “This is a more graphic world and there is a return of logos, so we re-edited the symbol of our roots,” explained the designer.

“We just closed 2018, which marked our 50th anniversary, and we are opening a new chapter.” As reported, last fall, the company staged its first exhibition, called “Generation Paisley” — a reference to a staple pattern for the brand — displaying 50 men’s and women’s designs from the house together with the Etro family’s personal objects and photos at the Mudec museum in Milan.

Etro said the campaign will be print and digital, with the addition of videos, “probably backstage snatches — the world has changed, and there is so much interest in what lies behind the images, too.” Digitally, the campaign will bow this evening [Feb. 6], while the printed images will be unveiled during Milan Fashion Week.

Etro said the shoot was done in a day. “We were lucky because it rained the day before. Every look was readied in advance, and we were well-prepared for the beach as the collection includes swimsuits, turbans and beach towels,” she said of the lineup, which included floaty dresses, caftans, relaxed pantsuits and patchwork jeans in bold colors — yellows, reds and oranges — and motifs that included floral patterns, Etro’s paisley and ikats.

Credits include stylist Anastasia Barbieri and make up by Romy Soleimani and hair by Tamara McNaughton.