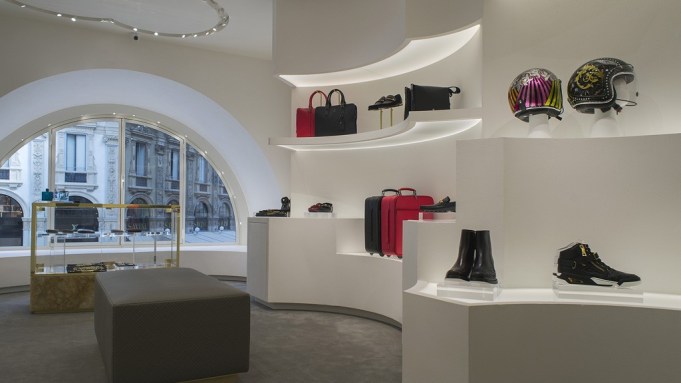 The brand invested 2 million euros, or $2.6 million at current exchange, in the store alone, according to Versace chief executive officer Gian Giacomo Ferraris. That is on top of what sources estimate was key money of 15 million euros, or $19.4 million, to secure the location.

In addition, the company is sponsoring the renovation work in the Galleria with Prada and Feltrinelli for 3 million euros, or $3.8 million, as reported, with Versace providing half of this sum. “This is our cultural responsibility, as we have entered the second phase of our expansion, also in view of the initial public offering,” Ferraris said.

Asked about a possible time frame, he responded: “The sooner the better, but as we said before, it will likely be in three to five years.” Blackstone Group took a 20 percent stake in Versace in February with plans to expand the brand globally and seek an IPO.

The work on the Galleria is expected to be completed in time for the city’s international Expo beginning in May.

The Galleria store is a major bet by Versace, but indicates the importance of the accessories category to the brand. “This unit celebrates the growth of the division, which now accounts for 50 percent of total sales, compared with 20 percent in 2009,” said Ferraris at the new boutique, which will be officially inaugurated with a party on Friday during fashion week. “Also, the Versace family hails from [Italy’s southern region of] Calabria, but the company was founded here in Milan and the headquarters are in the city. Here is where we show, so it was important for us to be in such a relevant position.”

The store’s concept is an evolution of the blueprint introduced in 2012 in New York and Beijing and designed by creative director Donatella Versace in collaboration with British architect Jamie Fobert.

The restoration of the store, which, like the Galleria, dates back to 1865, was supervised by the superintendent of fine arts, and uncovered the original friezes, capitals and columns of the location.

“The history of Versace meets the future and it was an honor to defend and promote the value of Italy’s culture returning to Milan one of its jewels,” said Donatella Versace. “My collaboration with Jamie Fobert is based on an intense dialogue between fashion and architecture, from New York to Paris and onto this city.”

Strategically placed at the main intersection of the Galleria, called the central octagon, the boutique counts three windows and covers 2,754 square feet over two levels. Modern elements such as Plexiglas displays and brass fixtures contrast with the vintage wood floors and the 19th-century decorations.

The store carries a site-specific accessories collection called Versace Ornamental embellished with a leather pattern reminiscent of the friezes and the capitals in the store.

Ferraris said the company saw double-digit growth in August and that he expected to close the year with a double-digit gain. He noted that men’s wear has been growing strongly and accounts for 50 percent of the business. To wit, he revealed plans to initiate a Su Misura made-to-measure project.

Going forward, Versace will channel its investments mainly to the U.S., South America, Korea and Japan, added Ferraris. That said, stores in Barcelona and Düsseldorf will open by November.