By Pete Born and Cynthia Martens on October 11, 2012
View Slideshow 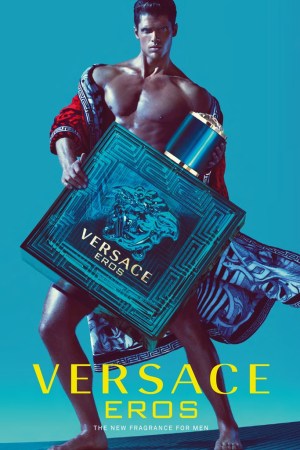 This story first appeared in the October 12, 2012 issue of WWD. Subscribe Today.

“This was very important for us,” she said this week of the scent developed by Versace’s fragrance licensee, Euroitalia. “I have focused a lot on men’s recently, and this was a chance to do something different for men, something that speaks of desire.”

The result was Eros, named after the Greek god of love and the son of Aphrodite. The Greek allusions are a bow to the fashion house’s late founder Gianni Versace, who grew to love Greek history and mythology while growing up in the seaside province of Calabria in southern Italy. His symbol was the head of the goddess Medusa, which adorns the bottle’s face and the top of the cap. The ancient Greek key symbol is molded into the front and back of the see-through flacon, which is colored in a special blue to capture the particular hue of the Mediterranean.

Claudio Tenan, export director of Euroitalia, said the color was achieved by mixing existing shades of blue into a new color. Giovanni Sgariboldi, president of Euroitalia Srl, which is based in Cavenago di Brianza outside Milan, agreed that every effort — in the juice, the packaging and the advertising — was made to produce “a very Versace” fragrance.

“For me the fragrance is very iconic, it’s really the DNA of Versace,” added Donatella Versace. “We have the Greek motif that makes you think of ancient Greece and antiquity, mythology, and the color turquoise represents the Mediterranean. It’s very Versace.”

Her thinking ran straight through the advertising, which, complete with thunder and lightning bolts, shows an armor-clad warrior shooting an arrow through an exploding bottle of fragrance. It’s not exactly the cuddly Cupid of Rome tickling lovers’ hearts.

“For the model, I wanted a gladiator who fights for what he wants, who fights to attain his goals,” Donatella Versace said of Brian Shimansky, who appears in a commercial produced by Mert & Marcus under her creative direction. “This is a fragrance for man who is a master of himself. He is a hero: someone who defends his ideas and opinions.”

The fragrance, designed by Aurelien Guichard from Givaudan, is described as a fresh, woodsy oriental. The top note contains mint oil — capitalizing on a trend — lemon Italy Orpur and green apple. The heart includes tonka bean, Venezulan ambroxan and geranium flower, giving the formula a hint of fougère.

The fragrance will be unveiled later this month at the Tax Free World Exhibition in Cannes, France, and launched in Italy in November, then rolled out to the rest of the world, starting in spring 2013.

Sales projections were not broken out, but industry sources estimate that global sales could hit $100 million at retail for the first full year on counter. An estimated 25 to 30 percent of that total could be generated in the U.S.

Connie Ruscio, general manager of the U.S. distributor, Fragrances Elite, said Eros could be Versace’s top men’s scent in the U.S. Eros will be launched in the U.S. in March with an exclusive at Macy’s. Then the line will be rolled out to the balance of the 2,200 door distribution. In terms of American pricing, the 1.7-oz. eau de toilette spray will be priced at $60, the 3.4-oz. size will be $80, the deodorant stick will be $26, the aftershave balm $25 and shower gel $35.

The TV commercial will figure prominently in the promotional package. Co-op TV will be done with Macy’s for Father’s Day and Euroitalia will make liberal use of the commercial in Europe. In general, Tenan said the company is making largest use of TV it ever has. In the U.S., the company is advertising its top-selling Bright Crystal fragrance at Christmas for the first time. For the holidays, Eurotalia will be doing more TV than print during the holidays in Europe.