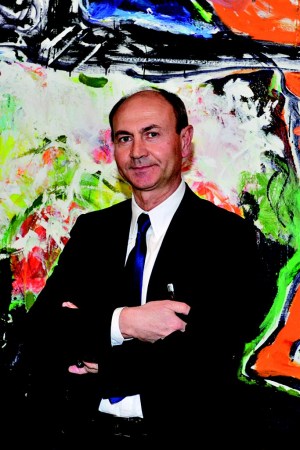 MILAN — Now that it’s back in the black, Gianni Versace SpA wants to step things up.

Dollar amounts have been converted at average exchange for the periods to which they refer.

“I am really satisfied with the work done and our strategy,” said chief executive officer Gian Giacomo Ferraris in an interview at the Versace headquarters here. “These results confirm the strong appeal of the brand globally, its values and excellent design, a strong brand management and impeccable execution. Given the strong signals seen in the first three months of the year, and in light of the foundations we have set to grow in the future, the company targets double-digit sales growth for the next three years.”

The executive once again underscored the Versace family’s involvement and support, dismissing the idea of a public listing or a sale, even of a partial stake. He said Donatella Versace’s daughter, Allegra Versace Beck, has an operating role within the company and, as the majority shareholder of the firm and member of the board, has been increasingly active on the design front.

“Many believe you must be big to grow, but this is not necessarily true. Versace doesn’t need anyone. It has enormous brand awareness and a healthy cash flow,” said Ferraris.

“When we announced the company’s restructuring in 2009, we forecast a return to profit by the end of 2011 on modest revenue growth. We far exceeded those expectations,” he remarked.

The restructuring will help the company remain profitable in the future, and a series of projects is already lined up. Versace has tapped former Jil Sander communications director Andreas Bergbaur as group director of marketing, digital strategy and e-commerce, and will launch online sales on its Web site in September in the U.S., Europe and Australia. The U.S. is high on the agenda for the company, as it showed double-digit gains on a like-for-like basis in 2011 and 31 percent growth in the first three months of 2012.

A flagship will open in New York’s SoHo in June or July, and a Versace Collection unit is set to open at Beverly Center in Los Angeles.

Retail investments in 2012 include the opening of two Versus stores in Europe (one in Vienna in April and one in London in the second half of the year); 10 units in Greater China and South East Asia; a Versace Collection store in Milan, and four new stores in the Middle East — in Beirut, Kuwait, Dubai and Abu Dhabi. The company plans to refurbish its Paris boutique at the end of September, and to open three or four corners in Japan, a market it exited in 2009 and reentered last year. “This area is a significant opportunity for the group’s brands,” said Ferraris. Versace is also entering South America and Korea this year.

Ferraris said there are also plans to “strengthen the home division.” After furnishing residences in Manila, Mumbai and Riyadh, there are three new such projects in the pipeline this year.

Last year earnings before interest, taxes, depreciation and amortization (EBITDA) gained 73 percent to 38.7 million euros, or $53.8 million. Ferraris said the company continued to keep costs under control and that gross margin reached 55.9 percent despite start-up investments in taking the Versus line in-house, launching the Young Versace collection and reprising the Versace Atelier presentation — all steps taken so the benefits could be realized beginning in 2012, he added.

Last year, the company invested between 15 million and 16 million euros, or $20.8 million and $22.2 million, in capital expenditures, and Ferraris said he expects to invest 22 million euros, or $29.2 million at current exchange, in the company this year. “During 2011, we took back the Versus license [from licensee Swinger International SpA], which had a short-term impact on royalty income but which we believe will be a strong profit earner in future years,” said Ferraris.

In January, Versace returned to the couture schedule. In 2004, the house decided to pull couture off the runway and, in recent years, invited only editors to see the clothes on racks. Ferraris noted that the Versace Atelier, which counts 25 to 30 seamstresses, escaped restructuring cuts he activated when he joined the company in 2009, because he believes this division is what makes Versace “distinctive,” and what provides a “competitive advantage. The echo we had with the presentation was incredible,” and in terms of media and communication, the advantages are “unbeatable,” he said.

While remaining cautious, Ferraris believes the company will be able to generate double-digit sales growth for the next three years. For 2012, he downplayed currency issues, said royalties had limited importance (last year these totaled 35.9 million euros, or $49.9 million) and that he based his forecasts on October spring-summer sales to be delivered at the end of March, and fall-winter orders.